‘A Plague On Both Your Houses’, Meaning & Context

“A Plague on both your houses” is an idiom meaning “I’m not going to take sides: you’re both at fault and I will have nothing to do with it.”

It comes from Romeo and Juliet, and is the last words – a curse – of a character who is dying as a result of the feud between the two families.

Romeo and Juliet begins with a player coming onto the stage and reciting a prologue.

Two households, both alike in dignity
(In fair Verona, where we lay our scene),
From ancient grudge break to new mutiny,
Where civil blood makes civil hands unclean.
From forth the fatal loins of these two foes
A pair of star-crossed lovers take their life,
Whose misadventured piteous overthrows
Doth with their death bury their parents’ strife.
The fearful passage of their death-marked love
And the continuance of their parents’ rage,
Which, but their children’s end, naught could remove,
Is now the two hours’ traffic of our stage—
The which, if you with patient ears attend,
What here shall miss, our toil shall strive to mend.

The audience is therefore aware that there are two rich families that dominate Verona and that they are engaged in an ancient feud. The audience is informed that two young members of the families fall in love and the result is tragic, but that their death brings about reconciliation between the two families.

Romeo’s friend, Mercutio, dies in the town square after an accident while play-fighting with Juliet’s cousin Tibalt. He looks around at his friends and utters his last words: “A plague on both your houses.” Although he is a close friend of Romeo he has not been on either side in the feud and has become sick and tired of this ancient grudge that has poisoned the life of Verona and all its citizens, and has now killed him.

Elizabeth London and the Plague

“A plague on you” or “a plague on [something] is a curse that was used in Elizabethan England. It was the equivalent in our times of telling someone that you hope they get cancer. However, it became a more casual way of expressing strong dislike of anything one didn’t like. In Twelfth Night, for example, Sir Toby Belch, suffering from indigestion stops in the middle of a sentence and exclaims “A plague on these pickled herrings!”

The Elizabethan era was a remarkable time – a time of flowering after centuries of cultural darkness. All over Europe there was a revival of art, music, science, poetry – all of those aspects occurring in England too – and particularly, in London, a spectacular period of drama. The Queen was powerful and influential in Europe, and London was the premier international city, as it is today.  But during the whole of that age London was vulnerable to a plague that came in waves and killed a huge proportion of the population with each wave.

When the plague came the authorities took steps to try and control it. There was no vaccine and no treatment, and apart from what today we call “herd immunity” where so many people die that the virus or bacteria can’t duplicate and dies out, there was no remedy.

However, there were some mitigation measures. All places of entertainment and non-essential businesses, including the theatres, were closed down, People locked themselves in at home and carts went round, collecting the bodies. The government had red crosses painted on the doors of affected houses and the whole house would have to obey the quarantine rules – not to go out. In Romeo and Juliet the friar taking the message from Friar Lawrence to Romeo that Juliet is alive and waiting for him in her tomb is caught up in an infected area and quarantined. He is locked up, which is the dramatic device that leads directly to the tragedy in which the two young people die.

Those who were able to, fled from London to places the Plague hadn’t infected. Shakespeare was able to do that as he had his own home in Stratford. 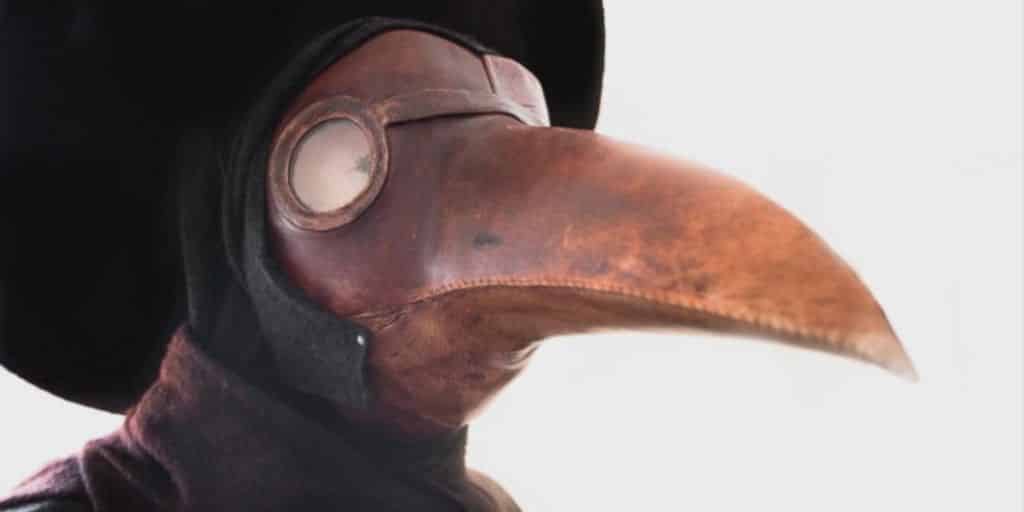 “A Plague on both your houses”

The story of William Shakespeare is in some senses a story about the Plague. In 1564, three months after Shakespeare’s birth, the Plague swept across rural Warwickshire. His parents, John and Mary Shakespeare, locked the family down, with sealed doors and windows and did everything they could to protect the baby, not allowing anyone or anything to come anywhere near him. They had already lost two daughters in previous outbreaks and were determined that they were not going to make the mistakes that had led to those deaths.

After some years in London Shakespeare was enjoying the life of a successful actor and playwright. In 1693 the Plague hit London and all the theatres were closed. Shakespeare decamped to Stratford and, deprived of the necessary conditions for writing plays – collaboration with other writers and getting feedback and input from other actors – he spent a year writing poems. He came up with two major poems while the theatres were closed between 1593and 1594 – The Rape of Lucrece and the love story, Venus and Adonis.

The Plague was clearly at the top of his mind as he wrote. In Venus and Adonis he explained that love was so pure and beautiful as “to drive infection from the dangerous year,” and so powerful “That the star-gazers, having writ on death,/May say, the plague is banish’d by thy breath.”

The theatres opened again in 1594 and Shakespeare was able to continue with his career as a playwright. But the Plague was never far away and the theatres were major spreaders, so when it struck London again in 1601 and again in1603, the theatres, seen as particularly dangerous spots for the spread of the disease, were again closed. Shakespeare remained in London during both waves, locked down in his lodgings. During those times he worked on revising earlier plays, getting them ready for performance.

The Plague rose up again in 1606. This time Shakespeare took his whole company, The King’s Men, on a tour of towns and villages in the English countryside. Living day to day, eating and sleeping with his troupe of performers, who were by this time his close friends, he performed a miracle of writing, completing a revised edition of King Lear – the one that became the definitive version – and writing Macbeth and Antony and Cleopatra.

We do not wish anyone to die of a viral pandemic these days. In our more sensitive age, having to endure a pandemic at least one a century, with so many millions of friends and loved ones dying, it would be too offensive. It was offensive, too, in Shakespeare’s time, to wish the plague on someone and while “a plague on both your houses” later became an English idiom, Mercutio meant it: it shows how much he resented having to forfeit his life in the interests of a meaningless feud.