Meaning of the idiom “Better late than never”

“Better late than never” is a common, much-used, English idiom. It’s used when someone wants to welcome the fact that something has happened, even if it happened later than expected or planned for.

It is a very useful idiom to express a wide variety of situations. It is used to express relief that something has happened at all, after the optimum time; it can be used ironically, suggesting that the speaker is actually quite irritated with whatever or whoever it is that is late, and is thus a pointed comment on the lateness. If it’s used with a sarcastic tone, it could be insulting or rude, and is often used in professional situations such as someone being late for a meeting, in which case it could be particularly hurtful.

It’s a very well-known idiom so those using it can assume that the person they’re speaking to understands its implication.

Origin of “Better late than never”

“Better late than never” has a very old origin. The phrase is a direct translation of a Latin proverb. It first appeared as potiusque sero quam nunquam in Titus Livy’s “History of Rome.”

The phrase found its way into English later and was used for the first time in a written text by Geoffrey Chaucer in his poem, “Canterbury Tales,” appearing in the “Canon’s Yeoman’s Tale.” Neither the Canon nor his yeoman are with the group at the start of the pilgrimage and join the merry band at a later date as they make their way to Canterbury. They are both alchemists, and Chaucer’s distaste for both is evident.

The phrase is not so much about their late arrival, but about what actions should be taken. The full line is:

“Ye that it usen, I counsel ye it let, lest ye lose al; for bet than never is late; never to thrive, were too long a date.”

Chaucer is basically saying that never is too long an amount of time for something to thrive, but to be late is not. His form of this phrase is written as “for bet than never is late,” in modern English, better late than never. 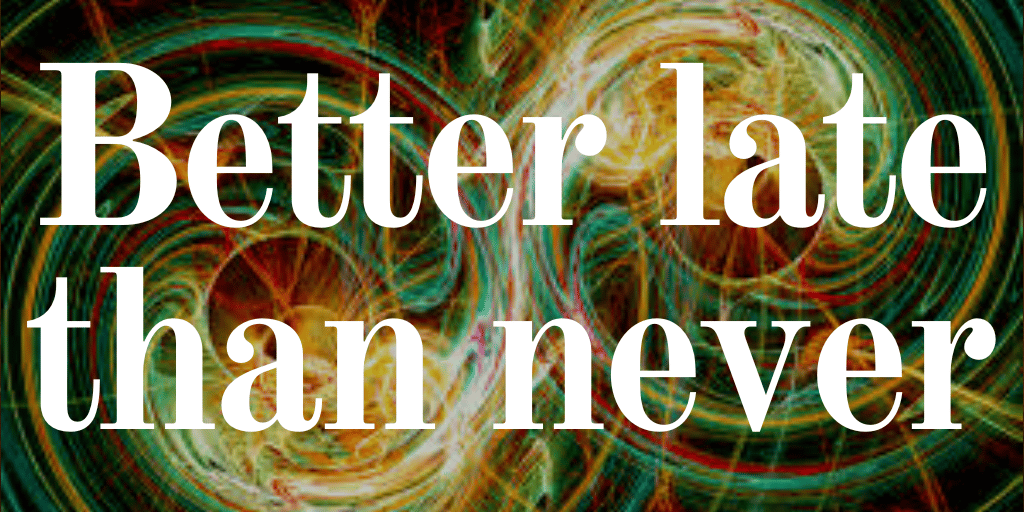 Uses of the idiom “Better late than never”

This idiom is often used to say that it is better for someone or something to be late than never to arrive or happen at all.

“Tom, you finally handed your homework in. Well, better late than never”

It is also used to say that you are glad someone has done something, or to say that they should do something even though they are late.

Perhaps, when some process is not working out as expected, but finally begins to work, the relief can be expressed as:

“Better late than never. I was really worried that this was going to fail.”

It’s used, perhaps, by a teacher reprimanding a latecomer, greeting her sarcastically with an appropriate tone, as a reprimand, and the suggestion not to do it again.

The proverb is also related to “it’s never too late,” in that it is never too late to stop something or to try something. To stop smoking later in life is “better late than never,” as is finding the time to explore new musical types, travel the world or get to grips with classic novels. This does not mean such things are necessarily better later in life.

“Better late than never” in the arts

Better Late Than Never: From Barrow Boy to Ballroom, autobiography by Len Goodman

Better Late Than Never (Eddie and the Hot Rods album), 2004

“Better Late Than Never”, single by The Nolans from Making Waves

Modern Western culture is preoccupied with time – every aspect of life is regulated by time, Being on time or being timely is one of the most important things in the smooth running of modern life, and lateness is therefore a major issue. Here are some quotes about lateness from prominent figures: