Meaning of “bury the hatchet”

In modern culture the idiom “bury the hatchet” is a metaphorical phrase with only one meaning: an agreement to end a disagreement, quarrel, or feud that has divided two people or two groups.

Origin of “bury the hatchet”

It is generally assumed that the phrase comes from Native American warfare practices, from a centuries-old practice involving the literal burying of a hatchet, seen among the Native American tribes of North America. Chiefs would meet and bury their weapons as a symbolic gesture of peace.

There is an Iroquois folk legend about two leaders who convinced the five great nations – the Mohawk, Oneida, Onondaga, Cayuga, and Seneca – to stop fighting and form a confederacy. To celebrate the peace, they buried their weapons under the roots of a large, white pine tree, and an underground river washed them away.

This said, aroud 90-77BC the Lamanites were converted to the Gospel of Jesus Christ when they saw the Anti-Nephi-Lehies were not fighting back. They then laid down their weapons of war and buried them, which could well be the earliest known case of burying the hatchet.

A translation of Thwaites’ monumental work Jesuit Relations, 1644, is the first known written suggestion of burying a hatchet, without using the exact phrase. He suggests that feuders should:

“Proclaim that they wish to unite all the nations of the earth and to hurl the hatchet so far into the depths of the earth that it shall never again be seen in the future.”

The first English reference to the specific phrase comes from Judge Samuel Sewall – who would later become notorious for presiding over the Salem witch trials – in 1680:

“I write to you of the Mischief the Mohawks did… they came to an agreement and buried two Axes in the Ground; one for the English another for themselves; which ceremony to them is more significant and binding than all Articles of Peace, the hatchet being a principal weapon with them.”

The settlers adopted the phrase ‘bury the hatchet’ and used it as a call for peace. In the 1785 Treaty of Hopewell, Colonel Benjamin Hawkins wrote: “The hatchet shall be buried forever.” In 1761, a Burying the Hatchet Ceremony took place between the British and Mi’kmag tribe in Nova Scotia.

The Church of Jesus Christ of Latter Day Saints (Mormons) believe the phrase is a reference to Alma 24:19: 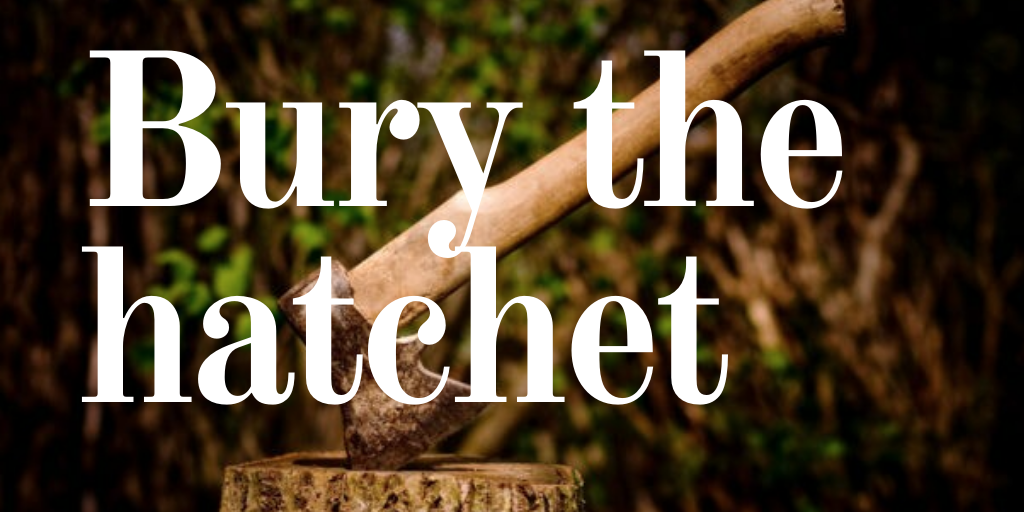 “Bury the Hatchet” across America

An early mention of the practice is to an actual hatchet-burying ceremony in Massachusetts. Samuel Sewall wrote in 1680

“of the Mischief the Mohawks did; which occasioned Major Pynchon’s going to Albany, where meeting with the Sachem they came to an agreement and buried two axes in the ground; one for English another for themselves; which ceremony to them is more significant and binding than all Articles of Peace the hatchet being a principal weapon with them.”

The Treaty of Hopewell, signed by Col. Benjamin Hawkins, Gen. Andrew Pickens and Headman McIntosh, in Keowee, South Carolina in 1795 established the boundary of the Cherokee Nation, and made use of the phrase “bury the hatchet”. Article 11 reads,

At the Return Day festival in Georgetown Delaware, which occurs after each election, a “burying of the hatchet” ceremony is performed by chairs of the Democratic and Republican parties. The ceremony symbolizes the two parties making peace after the election and moving on.

In 1926, fifty years after the Battle of Little Bighorn Sioux Chief White Bull and General Edward Godfrey buried the hatchet at the Tomb of the Unknown Soldier in Garryowen, Montana. It was near this site that Custer began his attack against the Sioux,

The Burying the Hatchet ceremony happened in Nova Scotia on June 25, 1761. It ended more than seventy-five years of war between the British and the Mi’kmaq.

“Bury the hatchet” was used in 1759 by the Shawnee orator Missiweakiwa when the French war effort during the Seven Years War was collapsing. The Shawnees had sided with the French against the English, but now the Shawnee would “bury the bloody Hatchet” with the English.

The first record of a peace ceremony in San Antonio, Texas was in 1749 between the Spanish commander of the presidio Captain Toribio de Urrutia, Fray Santa Ana, and the Lipan Apache people.