To call a spade a spade is to tell the truth about something; to be brutally honest, and even go beyond honesty, not exaggerating or minimising something; not hiding anything, putting it absolutely starkly – to tell it as it is.

As there can be no diplomacy involved, calling a spade a spade sometimes comes across as rude and hurtful. For example: “To call a spade a spade, you aren’t going to get the role in this play as you have no talent.” That is so blunt and straightforward that it could completely destroy the aspiring actor’s confidence. Compassionate people wouldn’t actually talk like that but the following is quite a common use: “I’ve seen the property and, to call a spade a spade, it’s a real dump.”

Origin of Call a Spade a Spade

The English writer, Robert Burton, used the phrase in his The Anatomy of Melancholy (1621) when describing his plain, unadorned writing style. “I call a spade a spade,” he wrote.

The phrase also appeared in Irish Member of Parliament and journalist Joseph Devlin’s book How to Speak and Write Correctly (1910) to satirize speakers who chose their words to show superiority:

“For instance, you may not want to call a spade a spade. You may prefer to call it a spatulous device for abrading the surface of the soil. Better, however, to stick to the old familiar, simple name that your grandfather called it.”

Oscar Wilde uses the phrase in his his 1885 play The Importance of Being Earnest, and also in his novel The Picture of Dorian Gray (1890):

“It is a sad truth, but we have lost the faculty of giving lovely names to things. The man who could call a spade a spade should be compelled to use one. It is the only thing he is fit for.”

The actual origin of the phrase, however, is in Greek in Plutarch’s Apopthegmata Laconica. The original phrase was “call a fig a fig,” “call a trough a trough,” and “call a bowl a bowl”. It evolved into “call a spade a spade” in the Apopthegmata’s first English translation in 1542, by Nicolas Udall, influenced by Erasmus’s translation into German, where he used the word “shovel,” and the phrase stuck. Here is the original English passage:

“Philippus aunswered, that the Macedonians wer feloes of no fine witte in their termes but altogether grosse, clubbyshe, and rustiall, as they whiche had not the witte to calle a spade by any other name then a spade.” 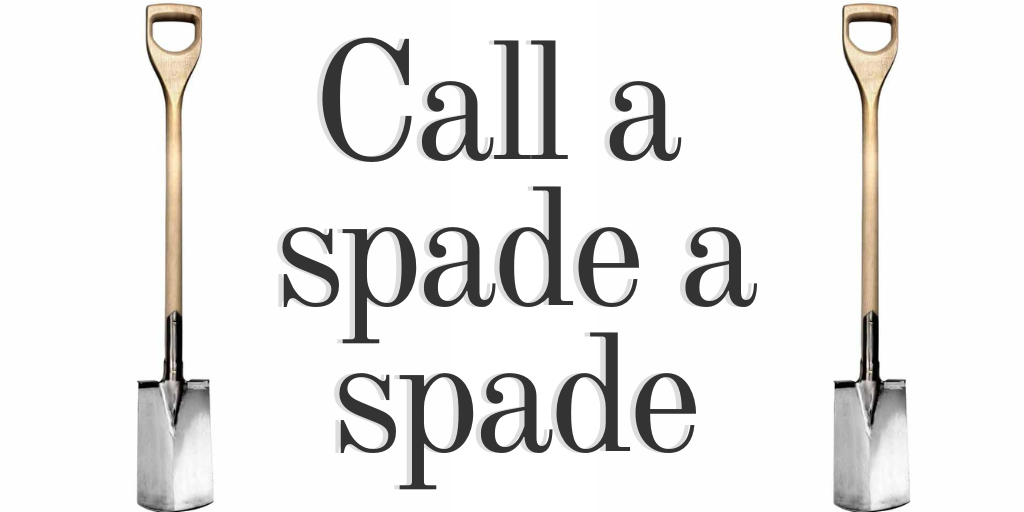 “Call a spade a spade”

Other manifestations of the idiom

The equivalent expression in Spanish-speaking countries is “a llamar al pan pan, y al vino vino“, which means “to call the bread bread, and to call the wine wine”. Italian has a similar expression:  “dire pane al pane e vino al vino”, literally “to say bread to the bread and wine to the wine.” The equivalent in France is “appeler un chat, un chat”, which translates as “to call a cat a cat”.

Words that mean the same as call a spade a spade

The future of the idiom “call a spade a spade.”

Having offered all the above information we would urge caution about actually using the term in any context. In fact, because of its racial associations, it has become uncool to use it at all. The term has been excised from most people’s vocabulary.

In the late 1920s during the Harlem Renaissance, “spade” began to evolve into code for a black person, according to Patricia T. O’Connor and Stewart Kellerman’s book, Origins of the Specious: Myths and Misconceptions of the English Language. The first appearance of the word spade as a reference to blackness was in Claude McKay’s 1928 novel, Home to Harlem. “Jake is such a fool spade. Don’t know how to handle the women.” It was also in the 1920s that the “spade” in question began to refer to the spade found on playing cards.

The word’s associations changed further in the years to come. Eventually, the phrase “black as the ace of spades” also became widely used, but is now completely outlawed. In the fourth edition of The American Language, H.L. Mencken’s book about language in the United States, “spade” is listed as one of the opprobrious names for Negroes. Robert L. Chapman noted in his Thesaurus of American Slang (1989). “All these terms will give deep offense if used by non-blacks,” listing “spade” in a group that included words like blackbird, shade, shadow, skillet and smoke.

The association of “spade” and Black people grew in the culture. Four years after Malcolm X was killed in 1965, poet Ted Joans eulogized him in his poem “My Ace of Spades.” The artist David Hammons also explored the negative connotations to the word in his 1973 sculpture “Spade with Chains.”

So what does all of this mean for the future of the idiom “call a spade a spade?  It is likely to become unusable in the same way as several other words and phrases have because of their pejorative associations with race and gender.