The phrase ‘for goodness sake’ was originally used literally, meaning for the sake of everything good or pure or decent or honest. It has since become an idiom, used as an exclamation, expressing feelings like frustration or impatience, usually accompanied by an exclamation mark – “For goodness sake!”

Swear words or curse words were originally connected with religion and religious figures like Jesus, God, Mary. We still use those curse words today but some people don’t like to do that, believing that it’s wrong to take those names in vain. They sanitise the language and say things like “gee whiz!” or “Jeepers creepers!” where others would exclaim “Jesus Christ!” In Shakespeare we often come across the exclamation “Zounds!,” which is a euphemism for “God’s wounds!” And so we have “for goodness sake!” often used instead of “for God’s sake!”

Origin of “For Goodness sake”

The phrase first appeared in written English in the Prologue to Shakespeare’s Jacobean play, Henry VIII.

“Therefore, for goodness sake, and as you are known
The first and happiest hearers of the town,
Be sad, as we would make ye.”

Although the play is usually listed as a Shakespeare play it would more accurately be described as a John Fletcher play. Fletcher was one of Shakespeare’s proteges, a younger colleague who worked with him as a writer with the King’s Men, and who succeeded him as the principal writer for the company. Shakespeare always worked with other writers and, particularly in the years coming up to his retirement, he spread himself widely among the younger writers, helping them with and editing their plays. It is without doubt that Fletcher wrote the lines quoted above. As always, however, Shakespeare gets the credit for any phrases that appear in plays accredited to him.

As the phrase became increasingly common, it evolved into being a simple interjection—just like its counterpart, “For God’s sake.” We usually use it as an exclamation rather than to urge any particular action for the sake of goodness.

Henry VIII was written shortly before 1613, the year in which the Globe Theatre burned down during one of the play’s performances.  The term “for goodness sake” was already in vogue use more than a century before Fletcher and Shakespeare made use of it.

“For Goodness Sake” Beyond Shakespeare

We find the phrase “for goodness sake” appearing in a text in Italy in 1502. The Italian historian, Niccolo Machiavelli, had just married when he had to go away on business, leaving his wife to manage the affairs and finances of the home. He was away longer than he had planned to be and she began to struggle with the job she had on her hands. She appealed to her husband’s friend, Biagio de Buonaccorsi, a fellow historian, to write to him on her behalf. In his letter he wrote:

“Monna Marietta blasphemes God, and thinks that she has thrown away both herself and her property. For goodness’ sake give orders that she may have her own dower, like others of her position, otherwise she will lose all patience with you.”

And in modern times, on Wednesday, February 22, 1922, the New York Times reported that “an agreeable if not brilliant musical comedy fashioned by various hands accustomed to the trade and briskly produced last night in the Lyric Theatre” opened to rave reviews with siblings Fred Astaire playing the role of Teddy Lawrene and Adele Astaire playing the role of Suzanne Hayden in the play “For Goodness Sake.”   It was reported that the siblings were “developing into delightful comedians.” 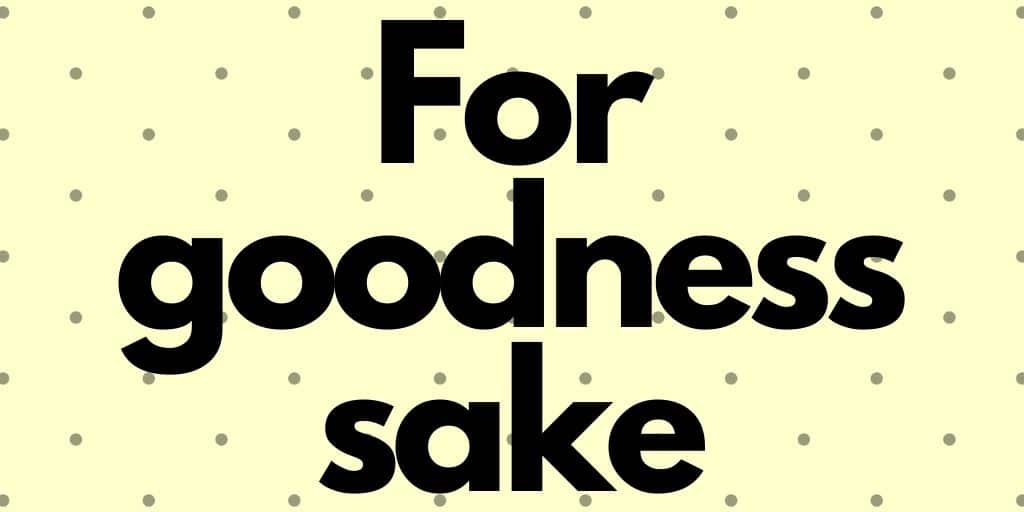 ‘For goodness sake’ used – but not invented – by Shakespeare