‘A Grain Of Salt’, Meaning & Context

Meaning of A Grain of Salt

The term, taking something with a grain of salt, is slightly different in its American and British usage – a ‘grain’ of salt in American culture and a ‘pinch’ of salt in British culture.

The term is used to encourage people to look at something with some reservation as it could be untrue or misleading. For example:

Origin of A Grain of Salt

It’s a strange term, that begs the question why salt? And why only one grain?

The origins of the phrase aren’t clear. One theory is that it originated in ancient Rome — in 77 A.D. from Pliny the Elder. It’s believed he used the phrase when translating an antidote for poison, saying to take the antidote with a grain of salt. That could be a reference to the fact that food is more easily swallowed if taken with a small amount of salt.

Pliny the Elder translated an ancient text, – an antidote to poison – with the words ‘be taken fasting, plus a grain of salt’. That would make the taste of the medicine more palatable. In Pliny’s translation, Naturalis Historia, he writes:

“After the defeat of that mighty monarch, Mithridates, Gnaeus Pompeius found in his private cabinet a recipe for an antidote in his own handwriting; it was to the following effect: Take two dried walnuts, two figs, and twenty leaves of rue; pound them all together, with the addition of a grain of salt; if a person takes this mixture fasting, he will be proof against all poisons for that day.”

It should be just a grain because too much salt is in itself poisonous.

‘A grain of salt’, didn’t enter the language until much later, The phrase has been in use in English since the 17th century; for example, in the English religious commentator John Trapp’s Commentary on the Old and New Testaments, 1647:

“This is to be taken with a grain of salt.”

Quite what Trapp meant by that citation isn’t entirely clear but it is possible that he wasn’t intending to convey the figurative meaning we now understand by ‘taken with a grain of salt’. The expression didn’t emerge again in print for a couple of centuries, and in America rather than England. The August 1908 edition of the US literary journal The Athenæum included this text:

“Our reasons for not accepting the author’s pictures of early Ireland without many grains of salt”.

It may be that ‘taken with a grain of salt’, with the meaning that we now give to it, emerged in early 20th century America.

The ‘pinch of salt’ variant is more common in the UK. The earliest printed for it is F. R. Cowell’s Cicero & the Roman Republic, 1948:

“A more critical spirit slowly developed, so that Cicero and his friends took more than the proverbial pinch of salt before swallowing everything written by these earlier authors.” 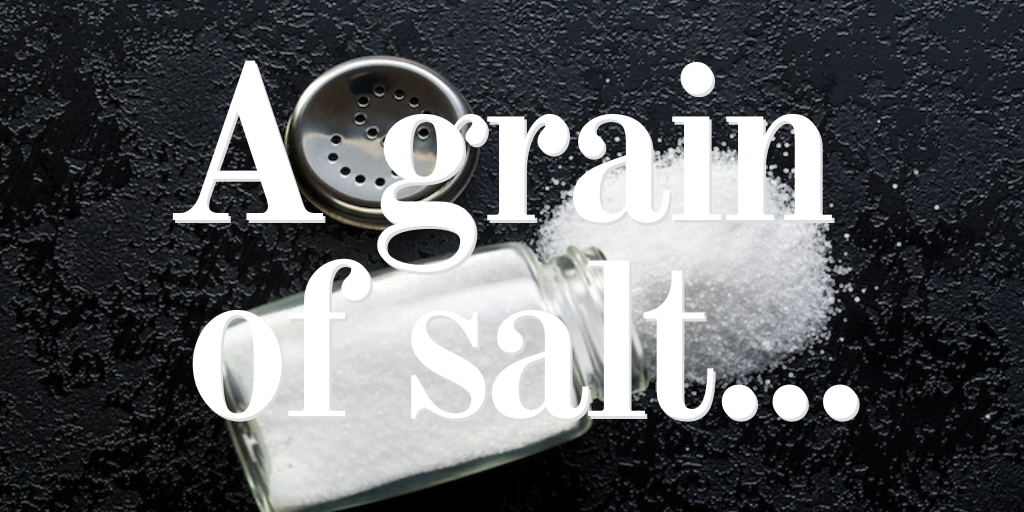 Popular phrase: “A grain of salt”

Doubtful: It’s doubtful whether he’s telling the truth about his amazing good fortune.

Tentative: He says the car is completely fixed but I think that’s somewhat tentative

Reserved: She told me she’s going to be there but I have my reservations about that.

Sceptical: They say it’s possible to make gold in a laboratory but I’m very sceptical about that.

Warily: They assure me that the bridge is safe but I would approach the crossing warily.