‘No Pain No Gain’, Meaning & Context

Meaning of “no pain no gain”

“No pain no gain” is a modern idiom, although the idea it expresses is not a modern idea. It means that there is a reward for hard work and that one cannot expect any reward without that. The ‘pain’ in the idiom does not necessarily refer to physical pain: it is a metaphor suggesting that however uncomfortable or difficult the effort may be such hard work is necessary in order to reap the benefit. High achievement does not come easily.

Origin of “no pain no gain”

The idiom began as a catchphrase by Jane Fonda in her 1982 video series of aerobic workouts. She would say “no pain no gain” and “feel the burn” as she put her viewers through some painful exercises. The catchphrase was taken up and quite soon it became a widely used proverb or idiom.

However, the idea of there being no success without hard work or self-sacrifice is a very old one. The ancient Greek poet Hesiod (c. 750-650 BC) expresses this idea in Works and Days:

“Before the road of Excellence the immortal gods have placed sweat. And the way to it is long and steep and rough at first. But when one arrives at the summit, then it is easy, even though remaining difficult.”

Another ancient Greek writer, the playwright Sophocles, expressed the idea in several ways his play Electra:

“Nothing truly succeeds without pain”

“Nothing succeeds without toil”

“There is no success without hard work”

“Without labour nothing prospers”

A form of this expression is found in the beginning of the second century, written in The Ethics of the Fathers 5:23 (known in Hebrew as Pirkei Avot), which quotes Ben Hei Hei as saying,

“According to the pain is the reward.”

It is meant to be a spiritual lesson; without the pain in doing what God commands, there is no spiritual gain.

“They must take pain that look for any gain.”

One of the earliest attestations of the phrase comes from the poet Robert Herrick in his “Hesperides.”:

“If little labour, little are our gains:

Man’s fate is according to his pains.”

The American Founding Father, Benjamin Franklin, wrote in The Way to Wealth,1734:

“Industry need not wish, and he that lives upon hope will die fasting. There are no gains without pains.” 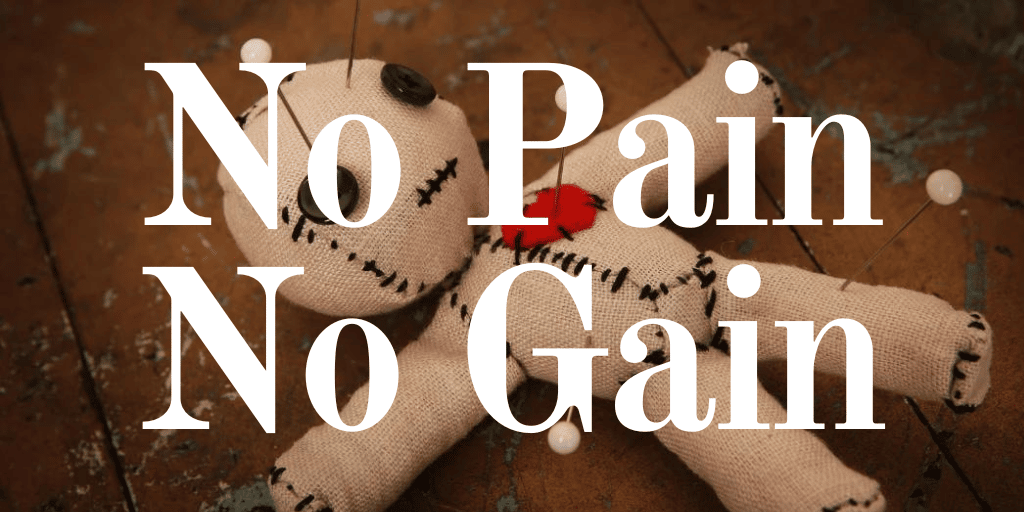 ‘No pain no gain’ – classic idiom

The concept of actual physical pain being beneficial in performance in sports is controversial. Some maintain it is beneficial while others dismiss that, holding that it’s harmful to achievement.

Pain is an ever-present phenomenon in sport and a sportsman or woman’s ability to tolerate pain is essential to success. There is all kind of pain: fatigue and discomfort; fatigue and extreme discomfort; muscle fatigue and soreness in the lungs and the heart; the soreness of overtraining; sudden acute pain as a result of an injury.

Such pain is not essential to achievement in sport and can, instead, prevent any performance at all. However, pain is a regular feature of training and performance and, if it doesn’t interfere with performance, it can be a good guide to the athlete’s readiness for peak performance.  General advice to an athlete is that she cannot perform at a high level and not experience some level of pain. Comfort and performance excellence are mutually exclusive. She cannot have them both. Prior to exercise, she should decide just how much pain she is willing to experience to achieve her goals. When pain shows up, she should be willing to feel fully as part of her experience. The pain be in service of her greater goal. She may be surprised to find that her pain suffering will be lessened when she allows pain to be a part of sport.

“No pain no gain” in culture

The rhyming pair of words together with its idiomatic meaning has been attractive to various cultural and media people as a title for their work. Including: