‘Play It By Ear’, Meaning & Context

Meaning of “play it by ear”

When someone says, “I’ll play it by ear” they mean that they’ll handle some unplanned or unexpected coming situation in whichever way seems to work when the time comes. That is, to deal with that situation without any predetermined rules or guidelines: one would see how something goes and go along with it instead of preparing for it beforehand.

Another way of putting it would be to say that one would be flexible enough to change actions after paying close attention to surroundings and other relevant factors.

Origin of “play it by ear”

The idea of playing something by ear originally referred to the playing of music without reference to a written score. Sometimes musicians would listen to a piece of music and then try to recreate the sound. And so, a musician might learn or study music without any sheet music, so they would then play what they had heard rather than what was in the score.

The Oxford English Dictionary tells us that the first citation is from A Brief Introduction to the Skill of Musick (1658), by John Playford:

“To learn to play by rote or ear without book.”

The idea goes back further, though, to the previous century, where the use of the word ear in relation to music meant musical talent. William Caxton’s assistant, Jan van Wynkyn printed the book The Pilgrimage of Perfection, by William Bonde in 1526:

“In the psalmody… haue a good eare”

(Psalmody refers to the art or practice of singing psalms or other sacred vocal music. A psalmody was the place where psalms were sung – what we now call the choir.)

While the use of the word ‘ear’ to denote musical talent dates back to the 16th century the actual phrase, ‘play by ear’  was coined much later.

The first record of it is in an 1839 edition of The Edinburgh Review:

“Miss Austen is like one who plays by ear, while Miss Martineau understands the science.”

The more figurative usage developed during the mid-20th century in the USA. The early references  relate mainly to sports, notably baseball; for example, this story about the proposed sale of the Brooklyn Dodgers, from The Coshocton Tribune, February 1934:

“Before going further in this direction, perhaps I can believe that awful suspense by stating that I am reliably informed today that the Brooklyn Dodgers, otherwise the daffiness boys, otherwise the young men who play by ear, are for sale.” 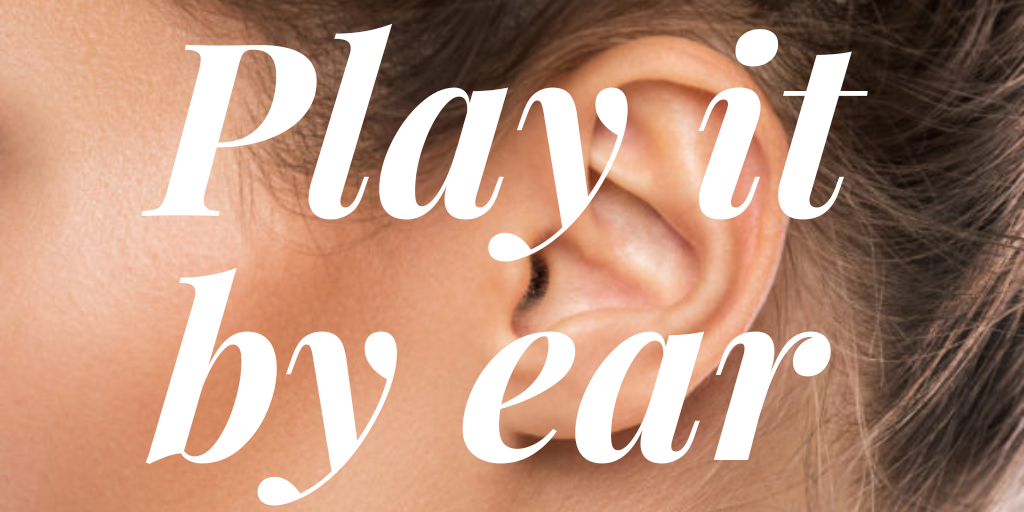 Popular idiom: “Play it by ear”

Using the idiom “play it by ear”

You would use the idiom to “play it by ear” in the following circumstances:

Your friend is organising a night out, and you want to make decisions about it beforehand. She says “Let’s play it by ear,” meaning, let’s see how it goes and respond to every circumstance as it arises.

You don’t have enough information to prepare for a presentation or talk. “I’ll make an opening statement and see how it goes. I’m going to “play it by ear.””

Somebody wants to set up a date and make a commitment to it. You may say, “I’m going to be very busy next week. Let’s rather “play it by ear.””

Other idioms about ears

All ears – To listen intently.

Bend your ear – To talk a lot to someone, usually about a problem.

Ears are burning – This expression is used when somebody has been talking about you.

Have your ear to the ground – To listen out for something, to be well-informed.

In one ear and out the other – To disregard what someone is saying.

Lend an ear – To listen to someone, usually about a problem.

Music to my ears – To hear something one is overjoyed at hearing.

Nothing between the ears – To be stupid or vacuous.

The walls have ears – A warning that somebody may be listening to what you say.

Up to my ears in something – To be very busy doing something.

Synonyms for “play it by ear”