‘Round the Bend’, Meaning & Context

Meaning of “round the bend”

Being driven round the bend means that something is driving you crazy. “All this noise from the building site next door is driving me round the bend.” Or “When your mother finds out that you’re skydiving it will drive her round the bend.”   More broadly it’s that someone who is crazy or eccentric is round the bend. It means ‘out of sight’, ‘off one’s rocker’, ‘way out’, and other metaphors referring to the separation of the mental process from social norms. In short, it’s a euphemism for crazy.

Origin of “round the bend”

The origins of “round the bend’ are unclear, and so obscure that no-one knows how it became a popular idiom in the English-speaking world.

There is plenty of speculation, however, and if one really wants to know where the idiom comes from one would have to choose from a number of theories:

One of the most popular explanations for the phrase’s origin is that it has a naval connection. To start with, a series of sailors’ knots is called a “bend.” And this theory is supported by an historian, F.C. Bowen in his 1929 nautical dictionary,  Sea Slang:  “Round the bend, an old naval term for anybody who is mad.” Moreover, a bend in maritime terminology is a class of knots, specifically those that either join two ropes or link a rope to something else. This might suggest restraining a madman at sea by the use of ropes and knots, or the result of the mental stress involved in trying to work out how to tie some of the more fiendishly complicated knots. The word “loopy” also connects the idea of craziness with a rope.

The conceptual links between round the bend and loopy , and with the more recent round the twist, which seems to have been a humorous reformulation of round the bend, are obvious, with the idea being of a person who is twisted or out of true, who is “bent” in a figuratively eccentric way. To what extent round the bend or loopy are linked to knots is unclear, and almost certainly no longer possible to discover. 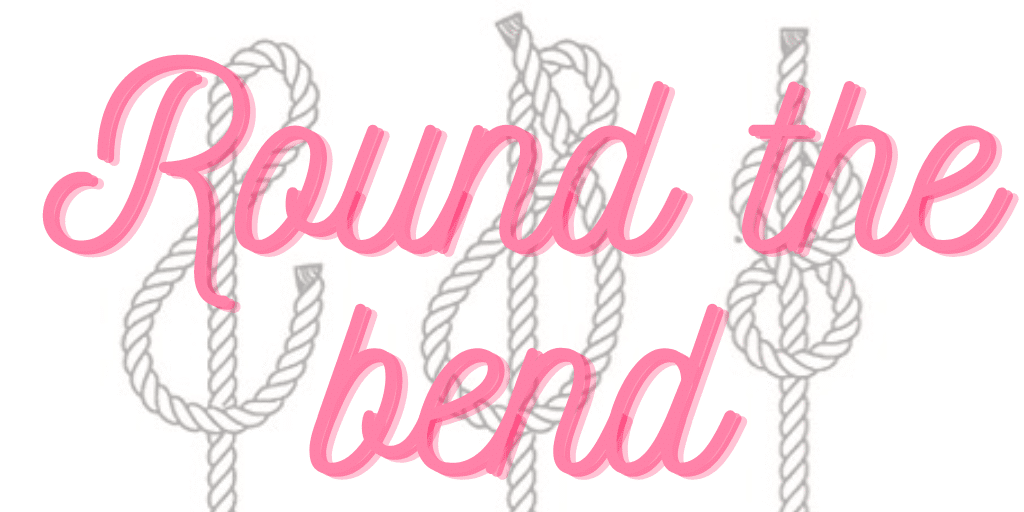 Classic idiom – “Round the bend”

The novelist Nevil Shute’s 1951 book, Round the Bend writes about a man called Shak Lin, nicknaked “Harpic,” a famous toilet cleaner whose motto was “Cleans Round The Bend.”

Shak Lin is called Harpic because he is clean round the bend…. In Shute’s flight log of his trip to Australia he reveals that when he was passing through Malaya on his return flight to England he met a member of the RAF whose officer was called Harpic for the same reason, that he was round the bend.

From the 1930s until comparatively recently, Harpic’s slogan was “cleans round the bend”, the bend being the U-shaped trap behind the toilet bowl that prevents the bad air from the drains escaping into the bathroom. From “Thesaurus of Traditional English Metaphors” (2nd Ed) P.R.Wilkinson under the heading I.85c Town services—lavatories, sewage, garbage comes “round the bend: Far gone in madness.” but no other clues or information there although it clearly refers to the U-bend of a WC.

Caisson disease, colloquially known as “the bends” is an occupational hazard for those who dive deep in the sea. Symptoms of caisson disease, ‘the bends’, may include acute itching, paralysis, confusion, dizziness, ringing in the ears, and brain damage, among other symptoms that may be in sum or in part mistaken for madness, either by an outside observer or by the sufferer. The disease is frequently preceded by “nitrogen narcosis,” called “rapture of the deep” by famous deep sea diver, Jacques Cousteau. The condition causes similar symptoms that look like someone going crazy.

The one-time Hudson River State Hospital near Poughkeepsie in New York State was sited round a bend in the river, so that inmates arriving there literally went round the bend. Another, a similar story, referred to the old Yarra Bend Lunatic Asylum in Melbourne, Australia, which closed in 1925. As it happens, the river Hudson is straight near the Hudson River State Hospital and is some way away, as was the Yarra Bend Asylum from the Yarra. But in neither case is it likely that new arrivals were transported by boat.