‘Sound and fury, signifying nothing’ is a quotation from Shakespeare’s play, Macbeth.

‘It’s all sound and fury, signifying nothing’ is something you may say to or about a person who is making a big fuss, maybe shouting and/or using bad language, and becoming really angry concerning a particular issue, when it’s not anything they can do something about, and all the noise and fuss amount to nothing and are just a waste of time and energy.

‘Sound and fury, signifying nothing’ context from Macbeth

Macbeth is just about at the end of his tether, having murdered his king to become king himself, and then, having to maintain his position by conducting a reign of terror against his opponents, he is exhausted and disillusioned. He has followed an irresistible ambition but now he finds that it has been a hollow quest.

The phrase occurs in one of the most famous soliloquies in all of Shakespeare:

Tomorrow, and tomorrow, and tomorrow,
Creeps in this petty pace from day to day
To the last syllable of recorded time,
And all our yesterdays have lighted fools
The way to dusty death. Out, out, brief candle!
Life’s but a walking shadow, a poor player
That struts and frets his hour upon the stage
And then is heard no more: it is a tale
Told by an idiot, full of sound and fury,
Signifying nothing.

To Macbeth now, to harbour his burning, overweening, “vaulting” ambition was idiotic. He is in a state of depression and life is worthless – a tale told by an idiot, full of sound and fury, signifying nothing.

This passage is one of the finest examples of Shakespeare’s use of poetry in his plays, where he uses imagery to create the soliloquy’s meaning.

At this point the intensity of Macbeth’s suffering is becoming unbearable. A victim’s ghost is haunting him, his guilt is torturing him, his enemies are closing in on him, his wife has lost her sanity and now he’s just heard that she’s killed herself.

We would expect a response with language that expresses a wild and desperate state of mind but instead we have a slow reflection that follows the pattern of his thoughts. They seem random as his mind jumps from one idea to the next without any logic. He mentions time, then candles, acting and the theatre, shadows, and a tale told by an idiot.

It all seems loose and jumbled: there is no intellectual logic in the development of the passage. However, there is a poetical, imaginative logic that makes the piece very tight, and one of the most remarkable achievements one could find in English poetry.

In this soliloquy Macbeth is a man for whom life has ceased to have meaning.  He starts with a statement of the futility of life and of time itself with images of time – tomorrow, day, yesterday, recorded time – using a rhythm that stretches time out and makes it creep.

Then there is a mention of light, but it’s only the daylight that guides us to the darkness of death. The light has come naturally from the images of time, particularly the word ‘day’. In death that light is extinguished, like a candle, which is the next image, and a candle’s light is brief, like life, compared with the long period of the dark night to come.

A shadow is another term for an actor, so the shadow thrown by the candle creates the image of an actor on the stage. The actor plays out the dramas and anguish of a human being, strutting and fretting, but that only lasts for the performance, and then he goes home and you don’t hear from him again. The actor’s passion has been shallow – just an act – and for a very short time. All that is a representation of life in the context of an eternity of death: it’s full of an empty passion that is just the raving of an idiot: it doesn’t last and it’s meaningless.

It’s a short piece of verse that sums up, not only a weariness of life but a whole philosophy of life and its futility. Each image gives birth to a new one and the beautiful logic develops in that way. And it captures perfectly the state of mind of the speaker. There’s no wonder it’s one of the most famous passages in English poetry. 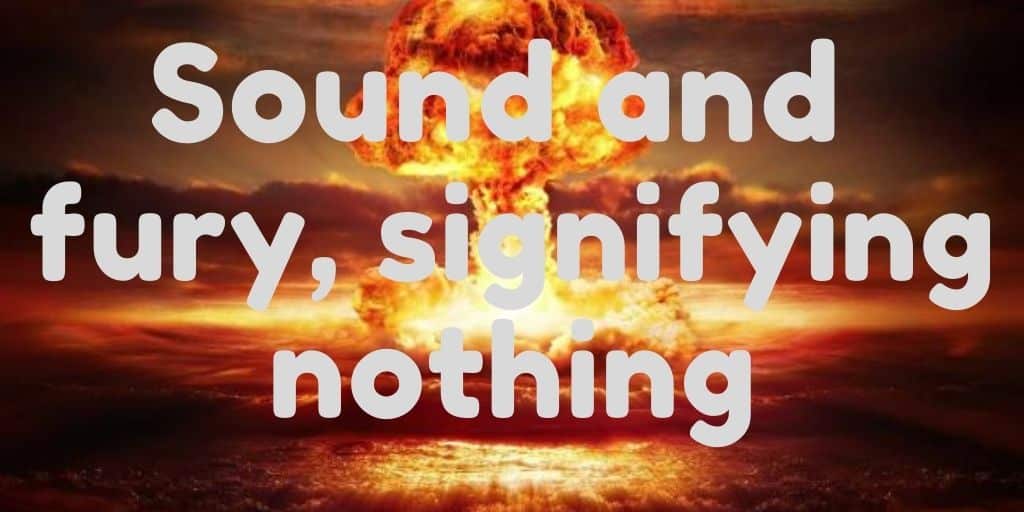 ‘Sound and fury, signifying nothing’

‘Sound and fury elsewhere in literature’

The Sound and the Fury is a phrase that is more famous as the title of a novel by the American writer, William Faulkner.

One of the narrators of the novel, all members of the Compson family, is Benjy, who has severe learning difficulties. In previous times people with such a condition were called “idiots.” In this case, though, Benjy’s ramblings and confusions add up to several insights into the story of the Compson family. The title is therefore ironic.