‘The Truth Will Out’, Meaning & Context

The idiom “the truth will out” originates in Shakespeare’s play, The Merchant of Venice.

Shylock’s servant, the young Lancelot Gobbo – a bit of a rascal – has a visit from his father. Old Gobbo is blind and doesn’t recognise his son.  Thinking he’s talking to a local stranger he asks for news of his son. Lancelot’s reply is:

“Nay, indeed, if you had your eyes, you might fail of the knowing me: it is a wise father that knows his own child. Well, old man, I will tell you news of your son: give me your blessing: truth will come to light; murder cannot be hid long; a man’s son may, but at the length truth will out.“

The Merchant of Venice, Act 2, Scene 2

The meaning of “the truth will out”

If one looks at it in the way we normally use grammar, the wording “the truth will out” doesn’t make sense. It’s a sentence that doesn’t have a verb. Shouldn’t it be “the truth will come out,” which is grammatically correct and seems to convey the idea more clearly?

No, because it has become an idiom and we all understand it, as well as if it had been “the truth will come out,” and we all love to use idioms as, not only do they taste well in the mouth, they usually go far beyond the literal.

We often use bits of language ungrammatically. They are usually idioms like “the truth will out” or they may just be remnants of an old language that have lingered on into the modern language. For example we may use old fashioned language like “I want out,” or “I must away, Good night,” and everyone will understand completely.

What exactly does “truth will out” mean? It basically means that no matter what one does to cover something up, the truth will eventually come out.

When speaking of (alleged) attempts to lie or cover up the truth, someone might say “truth will out,” an expression that seems to make no sense. Where is the verb? 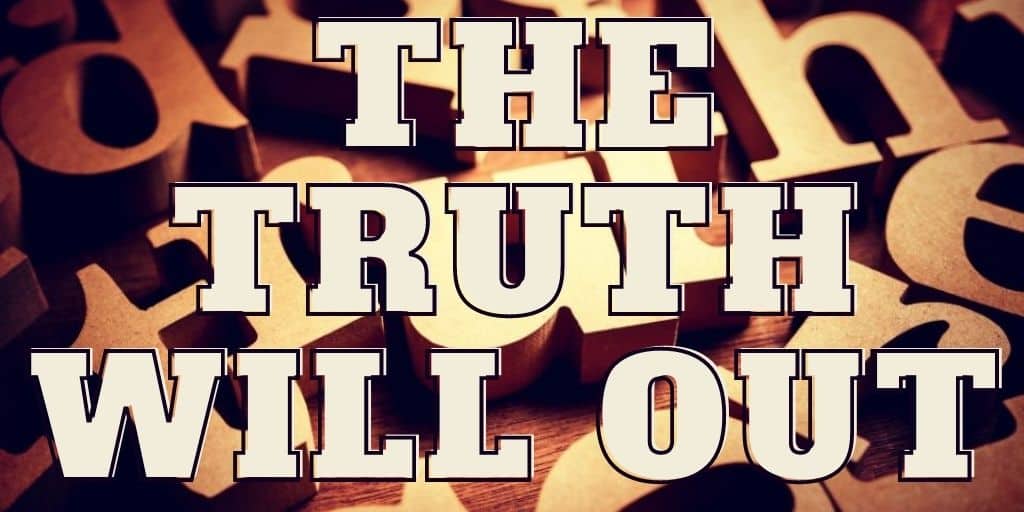 ‘The truth will out’ – Shakespearean phrase.

“Truth” is something that has intrigued human beings from the ancient philosophers to thinkers of the present. That may be because of the human tendency to try and hide it when they want to keep it secret. But the general consensus is that in the long run truth can’t be hidden for ever – that it will eventually be revealed.

Other idioms about the truth

There are countless instances of references to the truth in the idioms of our language:

If truth be told

e.g. “If truth be told I never really trusted him.”

Nothing could be further from the truth

e.g. “Don’t tell me that she’s the one who stole your candy. Nothing could be further from the truth.”

Economical with the truth

e.g. “He’s well known for being a liar, and here he is being economical with the truth again.”

The ring of truth

e.g. “When they say that it was a coincidence it has the ring of truth.”

To spill the beans

e.g. “The evidence is against you so spill your guts or you will be in even greater trouble.”

e.g. “Telling the truth from the outset would be the best way out of it for you.”

e.g. “In all honesty, this isn’t the best career for you.”

e.g. “In all fairness, he’s not the brightest star in the firmament.”

e.g. “It’s best that you come clean right now. The truth is going to come out sooner or later.”