‘These volent delights have violent ends‘ is a quote from Shakespeare’s Romeo & Juliet, spoken by Friar Lawrence in a conversation with Romeo in  act 2, scene 6.

Romeo and Juliet have met at a party to celebrate Juliet’s father having found her a young husband from the aristocracy and made arrangements for them to marry. But Juliet and Romeo, who has gatecrashed the party, see each other and fall instantly in love.

Both teenagers, they do not have the experience to handle what has happened to them. Their situation is particuarly aggravated by their being members of the two opposing families in an ancient Veronian feud. Even just to be found talking to each other would be dangerous. They do talk though, and foolishly agree to be married in secret the next day, if the local clergyman, Friar Lawrence, will agree to it.

He does, and while they are waiting for the fourteen year-old Juliet to arrive at Friar Lawrence’s cell, the friar says he hopes they are not going to regret this later. Romeo says it doesn’t matter – if anything bad happens it won’t cancel out the joy he gets just from one moment of seeing her.

Friar Lawrence shakes his head and says ‘These violent delights have violent ends’, which means such extreme emotions about that kind of pleasure often end in disaster. He goes on to warn him that even the taste of honey can become sickly, precisely because it’s so sweet, so that eventually you go right off it. So take it easy. If you go too fast there’s even more chance of failure than if you go too slowly.

Romeo:
Amen, amen! but come what sorrow can,
It cannot countervail the exchange of joy
That one short minute gives me in her sight:
Do thou but close our hands with holy words,
Then love-devouring death do what he dare;
It is enough I may but call her mine.

Friar Laurence:
These violent delights have violent ends
And in their triumph die, like fire and powder,
Which as they kiss consume: the sweetest honey
Is loathsome in his own deliciousness
And in the taste confounds the appetite:
Therefore love moderately; long love doth so;
Too swift arrives as tardy as too slow.

The line uses the word ‘violence’ twice. To do that in such a short line is a very powerful thing in poetry. And, of course, it goes right to the heart of the play’s meaning – star-crossed lovers, extreme (violent) joy in their love, ending violently.

Everything in this play points to those two things – violent delight and a violent ending: a pair of star-crossed lovers caught in irresistible sexual attraction rushing towards a violent end. Love in this play is extreme and violence pervades the whole text. The prologue that opens the play points to both themes and they are both played out through the text and are only resolved in the deaths of both. That is the real ending as their violent deaths bring about the end of the centuries of hatred and violence that have plagued the two families and the whole of the community. 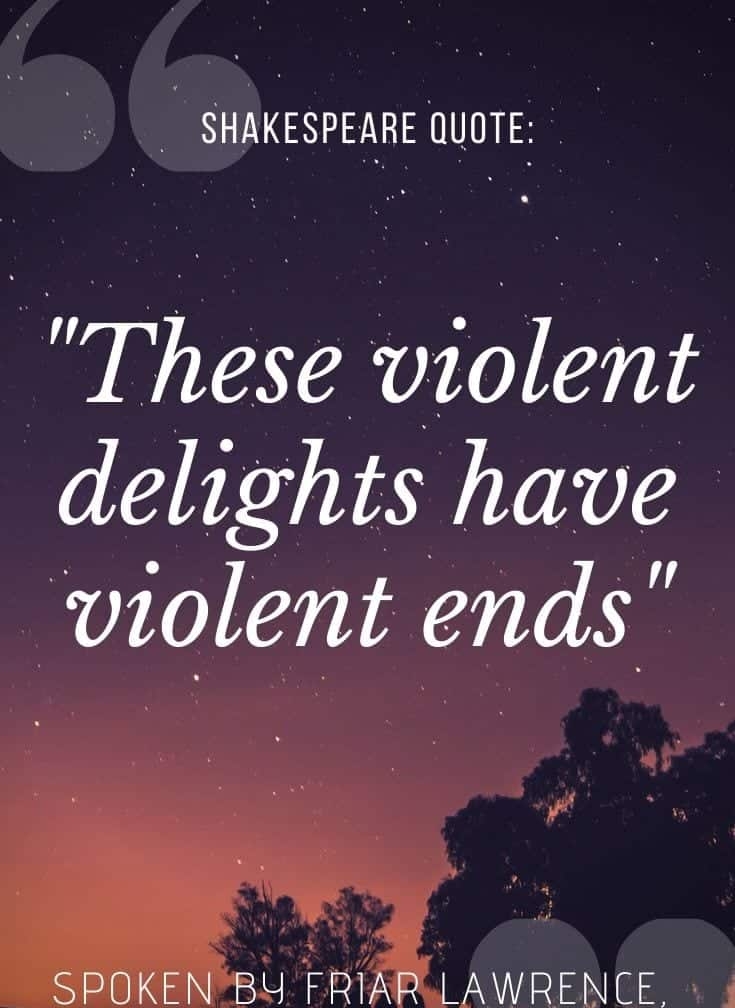