‘Woe Is Me’, Meaning & Context

The saying “woe is me” is used as a statement of despair by a grieving, mourning, or extremely sad person. It is also something a person whose life is drowned in a series of challenges and sees no hope may utter. However, doesn’t make sense in modern discourse. It is used only as a humorous idiom today: when using it in modern conversation it is only for dramatic effect.

Does the saying “woe is me” originate in Shakespeare?

The answer is no. Shakespeare does use it once, in Hamlet but by that time it was already archaic and not much used by English speakers in Elizabethan England.

Shakespeare knew the term from the Bible and used it in his play, and from there it became one of Shakespeare’s phrases, and an idiom. In the play, Hamlet is distraught about his father’s death and his mother’s remarriage. In an encounter with him, Ophelia is shocked by his appearance and manner, and this is her reaction.

“Oh, what a noble mind is here o’erthrown!—
The courtier’s, soldier’s, scholar’s, eye, tongue, sword,
Th’ expectancy and rose of the fair state,
The glass of fashion and the mould of form,
Th’ observed of all observers, quite, quite down!
And I, of ladies most deject and wretched,
That sucked the honey of his music vows,
Now see that noble and most sovereign reason
Like sweet bells jangled, out of tune and harsh;
That unmatched form and feature of blown youth
Blasted with ecstasy. Oh, woe is me,
T’ have seen what I have seen, see what I see!”

“Woe is me” in the Bible

The first appearance of the term, or a term very similar, is in the book of Job. Job is one of the oldest books in the Old Testament: early versions date from about 1200BC, which makes the phrase 3,200 years old in its original Hebrew language. The first occurrence of it in English would have been Wycliffe’s Bible translation into English in 1382. This is how it appears in Wycliff’s Bible.

“If I be wicked, woe unto me; and if I be righteous, yet will I not lift up my head.  I am full of confusion; therefore see thou mine affliction.”

Further on in the Bible there are numerous examples of the use of the exact phrase “woe is me”:

Woe is me! Because I dwell in the tents of Kedar!

Woe is me! Because I am a man of unclean lips and mine eyes have seen the King, the Lord of hosts.

Woe is me because I am borne a man of strife and a man of contention to the whole earth! Every one curses me.

God is come into the camp. Woe unto us, who shall deliver us out of the hand of these mighty Gods?

The daughter of Zion:

Woe is me now! For my soul is wearied because of murderers.

“Woe is me” in modern usage

“Woe is me” is an extra-grammatical idiom, meaning that it’s not standard grammar, which points to its archaic nature. Idioms frequently defy the rules of grammar, which is part of the nature of idioms. We do not use that kind of construction in modern English, so when we do use the phrase it’s for effect and it doesn’t describe someone in the very depth of despair. Instead, it is used ironically to refer humorously to something trivial. For example, someone may say “Oh woe is me, I’ve left my phone at home,” If someone has gone bankrupt, for example, though, they would not say, “woe is me.” They would have other, modern ways of expressing the despair of that.

“Woe is me” in modern life is almost certainly used only for humour. For example, on losing one’s job and being without an income, “woe is me” would not be used but being told one has to work an extra hour for the same pay “woe is me” could be a humorous comment on that minor adjustment to their work conditions. 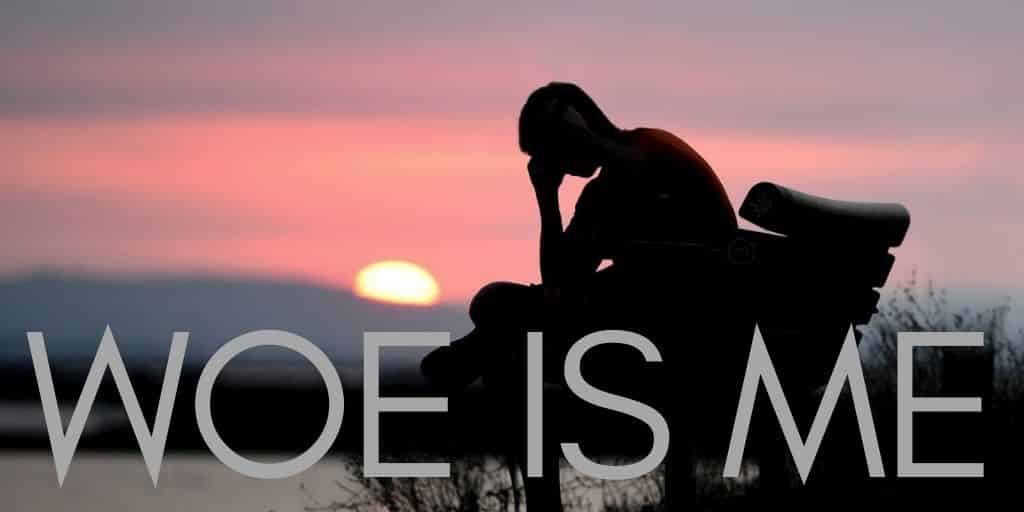 Woe is me… Biblical rather than Shakespearean.