Is Hamlet the most quoted William Shakespeare play of all time? Quite possibly so, and with due reason!

As with so many of his plays, William Shakespeare brings the characters in Hamlet to life with memorable dialogue and some fantastic quotes. We’ve trawled the play to pull together these famous quotes from Hamlet

Read our selection of the very best Hamlet quotes below, along with speaker, act and scene:

“O, that this too, too solid flesh would melt,
Thaw and resolve itself into a dew!”

“Neither a borrower nor a lender be,
For loan oft loses both itself and friend,
And borrowing dulls the edge of husbandry.”

“This above all: to thine own self be true,
And it must follow, as the night the day,
Thou canst not then be false to any man.”

“…though I am native here
And to the manner born, it is a custom
More honoured in the breach than the observance.”

“Something is rotten in the state of Denmark.“

“There are more things in heaven and earth, Horatio,
Than are dreamt of in our philosophy.”

“Brevity is the soul of wit.“

“Though this be madness, yet there is method in’t.”

“There is nothing either good or bad but thinking makes it so.”

“O, what a rogue and peasant slave am I!“

“Doubt thou the stars are fire;
Doubt that the sun doth move;
Doubt truth to be a liar;
But never doubt I love.”

“What a piece of work is a man! How noble in
reason, how infinite in faculty! In form and moving
how express and admirable! In action how like an Angel!
in apprehension how like a god! The beauty of the
world! The paragon of animals! And yet to me, what is
this quintessence of dust? Man delights not me; no,
nor Woman neither; though by your smiling you seem
to say so..”

“God hath given you one face, and you make yourself another.”

“To die, to sleep –
To sleep, perchance to dream – ay, there’s the rub,
For in this sleep of death what dreams may come…”

“The lady doth protest too much, methinks.“

“My words fly up, my thoughts remain below: Words without thoughts never to heaven go.”

“I must be cruel only to be kind;
Thus bad begins, and worse remains behind.”

“How all occasions do inform against me, and spur my dull revenge.“

“Alas, poor Yorick! I knew him, Horatio: A fellow of infinite jest.“

“The rest is silence.”

“Goodnight, sweet prince,
And flights of angels sing thee to thy rest!”

We have separate pages dedicated to Hamlet soliloquys and Hamlet monologues, which include the text with an analysis of other famous Hamlet quotes, such as:

“Oh my offence is rank, it smells to heaven“

Are we missing any great William Shakespeare Hamlet quotes? Let us know your favourite quotes from Hamlet in the comments section below! 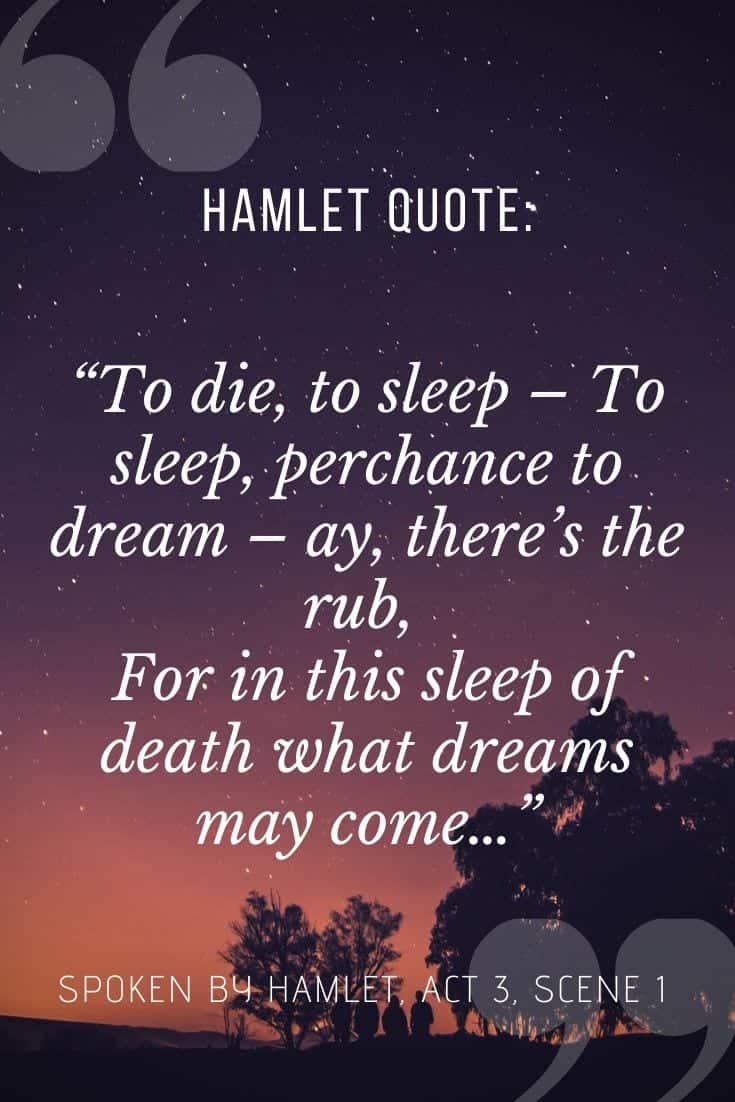