Playwright Robert Greene was a man of sour temperament who, it is believed, deeply resented Shakespeare’s success. In a pamphlet – Greene’s Groats-Worth of Wit bought with a million of Repentance – Greene refers to the Bard as “Shake-scene” and makes a bitter attack on him, as well as other playwrights of the time.

Greene was born in 1558. Highly educated, he had masters from Cambridge in 1583, and that another from Oxford in 1588. However, Greene he preferred the life of a theatre writer to the life of an academic, and according to his own pamphlets he abandoned his well-born wife and child in Norwich for a life in the theatre. His flamboyant personality and dress made him a well-known figure around the bohemian London scene. He is remembered mainly for the pamphlets in which he catalogued his exploits and those of his equally roguish friends.He was also an effective playwright, however. His most memorable and lasting works were The Honarable History of Friar Bacon and Friar Bungay (1591) and The Comical History of Alphonsus, King of Aragon (c.1590). It has been suggested that the fairy characters in his work The Scottish History of James the Fourth, Slain at Flodden (1590) inspired Shakespeare’s use of fairies in A Midsummer Night’s Dream. An earlier play, Pandosto (1588) has a plot similar to Shakespeare’s later work, The Winter’s Tale, suggesting the possibility of further influence on Shakespeare.

There is no portrait of playwright Robert Greene. The woodcut below is from the title page of English author John Dickenson’s Greene in Conceipt: New raised from his grave to write the Tragic History of Valeria of London (1598). 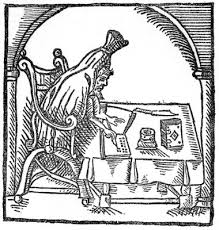