Thomas Dekker is one of those Elizabethan playwrights about whose early life we don’t know much. His name suggests Dutch ancestry and it seems from clues he gives from time to time in his pamphlets that he was born in London in 1572. His career spanned several decades of close contact with the most famous writers of his time.

Between 1598 and 1602 Dekker was involved in about forty plays for Philip Henslowe, one of the greatest Elizabethan theatre entrepreneurs, proprietor of The Admiral’s Men. These play were usually written in collaboration – mainly with Ben Jonson and John Marston. Dekker lived to the age of 60, spanning the golden age of the Elizabethan drama right into the Jacobean era seemingly adapting well to the changing tastes and fashions. Most of his work is lost but his acknowledged masterpiece The Shoemaker’s Holiday (1599), which survives and is still performed to this day. It is a boisterous, rowdy comedy of London life as seen through the eyes of a romanticist. Some of his most noteworthy plays are Lust’s Dominion, with John Day, John Marston and William Haughton, The Witch of Edmonton with William Rowley and Ford, and The Virgin Martyr with Philip Massinger. 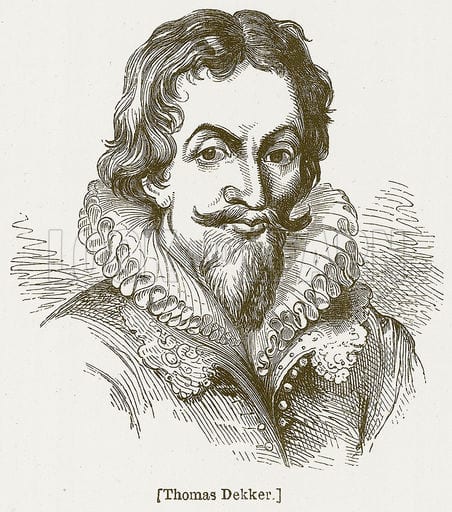 In 1612 Dekker was imprisoned in the King’s Bench Prison on a debt of forty pounds to the father of his friend, John Webster. He remained there for seven years, and despite the support of his many friends it was a difficult time for him. He wrote about the experience and reported that it turned his hair white. He wrote pamphlets but no plays throughout his years in prison. On release he resumed writing plays with collaborators John Day and John Webster and the younger writers John Ford and Philip Massinger. Among these plays is Keep the Widow Waking (1624), with Ford, Webster, and Rowley.