Some of the most prominent of the Jacobean playwrights, apart from Shakespeare, are Jonson, Webster, Tourneur, Beaumont, Fletcher, Middleton, Rowley, Marston, Heyward, Ford and Dekker. 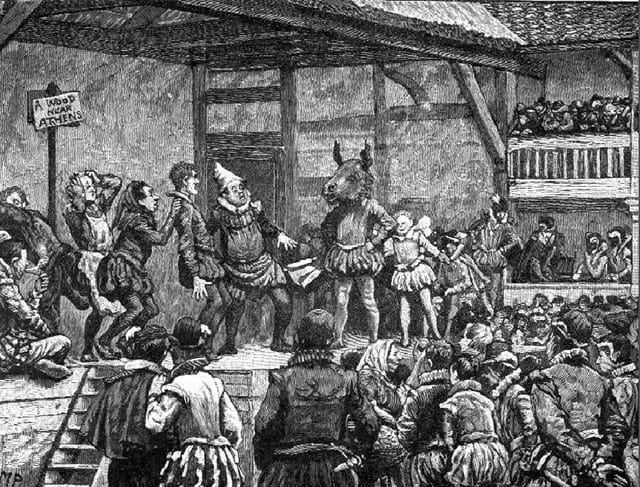 A Detailed Exploration of Jacobean Drama

James inherited a whole English drama culture. The English theatre was thriving as well as any industry of the time, complete with about twenty London theatres and scores of playwrights feeding them with new material every week.

By the time James came to the throne, the theatre had become a favourite leisure activity in London, but the appetites of the theatre-going public were changing. Audiences loved the humour and the many human situations – the tragic and comic dramas – that were unfolding before them on the stage. But as time went on the playwrights, reading the audience’s changing appetite, felt the need to give them even more realistic representations of the society of which they were a part.

Towards the end of Elizabeth’s reign the plays were becoming more edgy and human situations were becoming more exaggerated. Extreme violence was being portrayed on the stage. The playwrights were focusing on the human being’s capacity for selfishness, and exaggerating such Renaissance forces as human ambition, and its effects. They were exploring the nature of evil, pushing things to the extremes of human behaviour. Audiences flocked in to see those representations of the society in which they lived, dramatised in exciting titillating stories, full of sex and violence.

And so we have such plays as John Webster’s The White Devil and The Duchess of Malfi, with their highly intelligent characters perpetrating crimes and acts of violence in the pursuit of their ambitions. We have Thomas Middleton and William Rowley collaborating on a play that is still regarded as a model of Jacobean drama, The Changeling, in which we see a murderer cutting off the finger of his victim because the ring he wants to steal won’t come off. That is mild, though, compared with Shakespeare’s King Lear, where Lear’s daughter, Regan, tearing the old Gloucester’s eyes out, with the cry ‘Out, vile jelly!’

Shakespeare, the most gentle and sensitive of Elizabethan playwrights, with his moving human dramas, his comedies, and his ever-ready memorable quotes, but always with the lurking threat of violence, threw himself into the spirit of the Jacobean theatre, applying his talent for characterisation and plot to the new tastes. Iago, for example, the villain of Othello, a psychopath who limits his own violent acts but manipulates those around him to commit extreme violence, culminating in Othello strangling Desdemona, is the arch Jacobean protagonist – ambitious, intelligent, clever and manipulative. And, of course, Iago survives as one of the most notorious villains of both the Elizabethan and Jacobean periods – and of the whole of dramatic literature too.

A final, almost separate feature of Jacobean theatre sprang from a passion of the king and queen – the musical drama, and so the Jacobean theatre is full of masques – dramas with music and elaborate sets. And here again, the finest example of a Jacobean masque is Shakespeare’s The Tempest.