Shakespeare is probably the most famous of all Englishmen. One of the things he is famous for is the effect he had on the development of the Early Modern English language. For example, without even realising it, our everyday speech is full of words and phrases invented by Shakespeare. He was able to do that because English was changing as people modernised it in their normal workaday speech.

One of the ways the grammar was changing was that inflectional endings (suffixes that indicated the word’s grammatical functions in the way that many modern languages still have) had largely disappeared. Modern English was becoming wonderfully flexible and that was the background to the Renaissance explosion of the inventive language we see when we look at the poetry of the time. Shakespeare was a leading figure in that.

Writers were able to invent new uses for words with great freedom. For example, Caesar is able to say: ‘The wild disguise has almost anticked us all.’ An antic is a fool, which is a noun. Shakespeare turns it into a verb ‘to make a fool of.’ English was being set free to go where writers wanted to take it in their poetry. Shakespeare takes it where he likes throughout his texts, transforming the English language, pointing to the way we use it today. (Modern English is still changing and developing, of course, and you are playing a vital role in that as you pick up and use new phrases, borrow foreign words, incorporate other dialects into your speech and so on.)

A result of this free and easy use of word-play is the sheer number of words that Shakespeare is generally recognised as adding to the English language. Across all of his written works, it’s estimated that words invented by Shakespeare number as many as 1,700.

During Shakespeare’s era there was a huge inflow of other European vocabularies into the English language as a result of Renaissance cross-pollination. This created new variations for English words, and allowed endless possibilities for Shakespeare. In Love’s Labours Lost he is able to exploit multiple meanings of one word to create a sentence like ‘Light, seeking light, doth light of light beguile.’ – ‘intellect,’ ‘wisdom,’ ‘eyesight’ and ‘daylight’. (It’s worth checking out this article on Shakespeare original pronunciation to understand the ways in which Shakespeare used pronunciation as well as the words themselves to get his characters’ meaning across.)

Generally speaking, the grammar of Early Modern English is identical to that of Modern English so there is little difficulty in that regard. There is one issue that seems to bother newcomers to Shakespeare, however. Teachers will often find students complaining: ‘All those thees and thous . It’s soooo old-fashioned and I can’t be bothered with it.’ Once again, this usage was in a state of transition and, as always, Shakespeare exploits that.

In Modern English we use the word “you” as both the singular and the plural form. In Old English, thou was used for addressing one person; ye for more than one. You was around then, and while thou and ye were used as a subject of a clause, you was used as the object. By the time of Early Modern English, the distinction between subject and object uses of ye and you had virtually disappeared, and you became the norm in all grammatical functions and social situations. Ye had become old-fashioned and so, when we see it in the Authorised Bible (‘Oh ye of little faith’) we are seeing that, in spite of the fact that you may think you understand the language in the Bible better than you do Shakespeare, Shakespeare is more modern!

By Shakespeare’s time in Early Modern English you was being used for both singular and plural, but in the singular it also had a role as an alternative to thou and thee . You was used by people of lower status to those above them (such as ordinary people to nobles, children to parents, servants to masters), and was also the formal way for the upper classes to talk to each other. By contrast, thou and thee were used by people of higher rank to those beneath them, and by the lower classes to each other; also, strangely enough, in addressing God, and in talking to witches, ghosts, and other supernatural beings. As a refection of the higher status of males in the male/female context a husband might address his wife as thou , and she might reply respectfully with you .

The use of thou and you also had an emotional dimension. Thou commonly expressed special intimacy or affection; you , formality, politeness, and distance. That form is still used in French today in the use of vous and tu . Thou might also be used by an inferior to a superior, to express such feelings as anger and contempt or to be insulting and this is one of the areas where Shakespeare is able to get extra levels of meaning by showing disrespect by one character for another’s status. The use of thou to a person of equal rank could be used as an insult. Sir Toby Belch advises Sir Andrew Aguecheek on how to write a challenge to the Count’s youth, Viola: ‘if thou thou’st him somethrice, it shall not be amiss’ (Twelfth Night). (Read more on this topic on our guide to meanings of thee and thou.)

Shakespeare was acutely aware of the way the Early Modern English language that he grew up with was changing and it is yet another way that he was able to create the levels of meaning that made him such an enduring writer. When students take the trouble to understand the use of the thees and thous they are able to appreciate the additional meaning rather than seeing them as a difficulty. 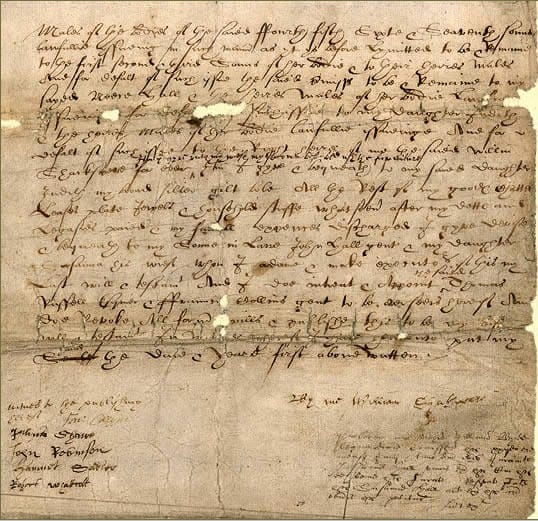 A manuscript of Shakespeare’s handwriting showing the language he used