Interested in the Shakespeare-London connection? Then read on… Although Shakespeare is known as the Bard of Avon, and came from Stratford, Shakespeare and London are inextricably linked.

In the article, we present 21 facts about Shakespeare’s London in the late 16th century and early 17th century that the Bard would have known and experienced. (See 55 Shakespeare facts for broader insights into his life.)

Most ordinary Elizabethan Londoners lived in apartment buildings that were squashed together haphazardly, without planning. London began to develop suburbs during this time. Some courtiers and other wealthy Londoners built themselves country residences around the edges of London in areas that later became part of what we know as London today.

People emptied their chamber pots and refuse from their windows and rain washed the waste into the river from dung piles, ditches, cesspits and streams. 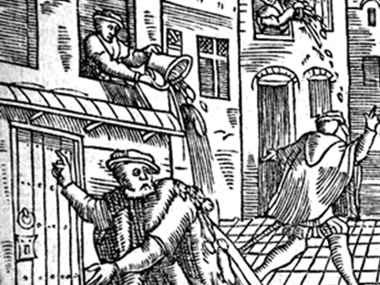 Shakespeare left Stratford in 1587 and went to London. The first record of William Shakespeare in London is of him living in Bishopsgate in 1596 (see our post on where Shakespeare lived in London). The address is unknown is thought to be in the vicinity of Leadenhall Street and St Mary Avenue.

It is not known how long Shakespeare resided in Bishopsgate but he was definitely living in the parish of St Helens, as according to the parish records he was assessed on goods valued at £5 and taxed 5 shillings.

In 1598 Shakespeare was lodging somewhere in the tiny area known as ‘the Liberty of the Clink’ which surrounded the notorious prison of that name. The location was within a minute’s walk of the building site that was to become the Globe Theatre (a project close to Shakespeare’s heart as he was a shareholder in the company).

In 1604 Shakespeare was living in Silver Street, St Pauls, in an upstairs room in the house of the Mountjoys, a French Huguenot family.

The population of London had risen to 200,000 by 1600 and the city was evolving as the multicultural city that it is today. There was a Jewish community in Bishopsgate and a few thousand black people – mostly servants, musicians, and dancers. There were also many Huguenot and Flemish refugees.

In 1613 Shakespeare bought a a house known as The Gatehouse, on the north eastern corner of the large Blackfriars Theatre site. He bought the house from Henry Walker for £140 but never lived there. Shakespeare left The Gatehouse to his daughter Suzanna. The Cockpit pub was built on the site of Shakespeare’s Gatehouse, and is still a working pub.

London Bridge was the only bridge that connected the northern and southern sides of Elizabethan London, and Shakespeare would likley have walked across London Bridge several times a week. Well-off Elizabethan commuters hired ferrymen to ferry them across and along the Thames.

As Shakespeare crossed London Bridge the impaled heads of executed traitors would have been a common sight, reminding him to be careful about becoming involved in politics.

The Thames was crowded with rowing boats, barges, and commercial sailing ships. There were no embankments on the Thames and the river would regularly overflow its banks during the spring and flood much of London. In winters the Thames frequently froze, and people would fix animal bones to their shoes and skate on the ice.  Vendors would set up their stalls to take the advantage of the many people who crowded on to the frozen river.

Shakespeare would almost certainly have visited the Royal Exchange on Threadneedle street – the world’s first shopping mall. It was similar to a modern shopping mall,  a huge arcaded building with banking facilities and accommodation for more than two hundred shops and thousands of businessmen. One could buy wigs, jewellery, perfume, hats, shoes, breeches, shirts, ruffles, feathers, silks, drugs, wine, spices, paper, ink, candles, toys, and anything else you could think of.

Something universally loved across Elizabethan London, including by the Queen herself, was bearbaiting – a sport in which a tethered bear is taunted to the cheers of spectators.

Public executions were Elizabethan Londoners’ most popular spectator activity. Londoners had a choice among the different kinds of executions: they could go to Tower Hill where the upper class condemned were beheaded with a broadsword or axe, or head to Tyburn or Smithfield to see some hangings of ordinary traitors and common criminals. There were about a thousand hangings a year.

Southwark was London’s entertainment zone (see our post on entertainment in Shakespeare’s London). The theatres, surrounded by inns, taverns, cockpits, gambling houses and brothels were in Southwark. Partly because of the influx of crowds, Southwark was a dangerous place to wander about in after dark, with muggers, drunkards and pickpockets everywhere.

The Southwark inns and taverns sold cheap ale, which people drank instead of water. Drinkable water was an expensive luxury, bought from water-carriers. For the most part the rich quenched their thirst with imported wine, and the less well-off with weak ale.

There were about twenty playhouses to choose from in Southwark. If theatre enthusiasts were lucky they would be able to get in to the Globe to see a play by the popular Master Shakespeare, and perhaps even see him in a small part in one of his own plays. 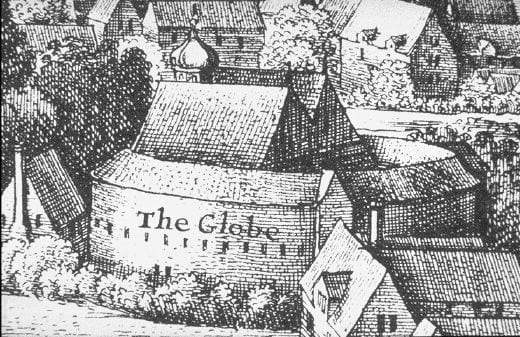 An etching of Shakespeare’s Globe Theatre from 1700

London was the commercial centre of England and all commerce was controlled by the guilds, which were run by powerful men. The role of the chief spokesman for the guilds evolved into the post of Lord Mayor of London, and the heads of the various guilds into the post of Aldermen of London.

The Lord Mayor’s Parade, following the election of the Lord Mayor of London, took place every year on Michaelmas Day (29th September).

The whole range of tradesmen in their liveries paraded in The Lord Mayor’s Parade – cloth workers, drapers, fish merchants, haberdashers, goldsmiths, ironmongers, grocers, mercers, skinners, salters, vintners, and all the rest. London’s sheriffs and constables, dressed up in all their finery, also paraded. 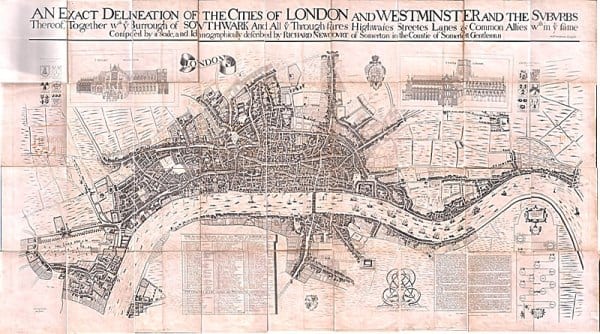 A map of London in Shakespeare’s time

Planning a trip to London?

We’ve pulled together some of the very best London resources from travel writers and bloggers below:

20 of London’s best landmarks, courtesy of Travel 2 Next.

What to do in London with teens from Kids Are A Trip.

Lust ‘Till Dawn share their top 50 Instagrammable spots in London.

Know of any useful London travel resources? Let us know in the comments section below!