The Lord Chamberlain’s Men – and later The King’s Men – was the name of the company of players (actors) with which Shakespeare worked for almost all of his theatrical career, as actor, dramatist and theatre manager. It was founded sometime in the 1560s by the players’ first sponsor, Henry Carey, the 1st Lord Hunsdon. At first he called the company Hunsdon’s Men but he changed it when he became the Lord Chamberlain in 1858.

When Hunsdon died his son, George Carey, the 2nd Lord Hunsdon took the company over and it became Hunsdon’s Men again. Then, when he was made Lord Chamberlain in 1597 he changed the name back to the Lord Chamberlain’s Men.

After Queen Elizabeth’s death in 1603 the new King, James I, gave the company his royal patronage and it became known as The King’s Men. 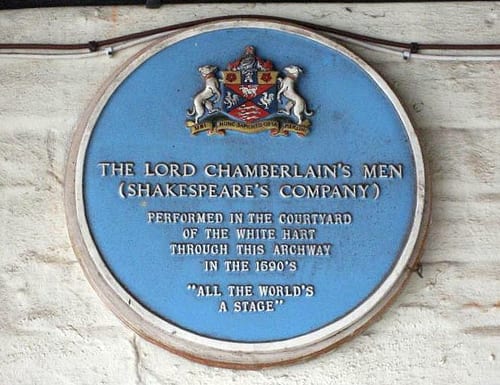 Plaque dedicated to a performance by The Lord Chamberlain’s Men

The company had several homes around London before the actor, Richard Burbage, and his brother Cuthbert built the Globe Theatre on the south bank of the Thames, which became its permanent home. The company, run by the Burbages, William Shakespeare, and four other shareholders, was commercially very successful, making the partners rich.

The shareholders often acted as well. Richard Burbage was the star of the stage, playing the big roles – King Lear, Hamlet, Macbeth, etc. Shakespeare performed on the stage as well, but he did not play the lead roles. There is a tradition in which Shakespeare is said to have played the role of the ghost of Hamlet’s father. There are also reports of his having played other minor roles in his own plays. He is also said to have acted in Jonson’s Everyman in his Humour.

The King’s Men were the most favoured of the many theatre companies in London and they performed frequently at court. Their only real rival was The Admiral’s Men, managed by the renowned actor Edward Alleyn.

The company continued successfully, long after the deaths of its most famous associates, until 1642, when the English Civil War broke out. It was then dissolved. The theatres closed and weren’t opened again for eighteen years. Shakespeare died in 1616, although he had retired some years before that. Richard Burbage died in 1619. The longest surviving member, John Heminge, died in 1630.