So you think you know a foul word or two? Along with writing some of most famous quotes in literature, Shakespeare’s insults, put-downs, and cussing were second to none, and with his insults, Shakespeare was most certainly a master of his trade. From “A most notable coward” to “Villain, I have done thy mother” Shakespeare had an insult for any occasion.

Watch our video slideshow of some of Shakespeare’s funniest insults, or scroll on for 55 savage Shakespeare shade throws:

Read our selection of the 55 most creative, foul-mouthed Shakespeare below, ordered alphabetically by quote, with play and act & scene listed.

1. “A most notable coward, an infinite and endless liar, an hourly promise breaker, the owner of no one good quality.”

6. “His wit’s as thick as a Tewkesbury mustard.”

Hamlet (Act 2, Scene 2) Read more Hamlet quotes, or our indepth analysis of ‘To be or not to be’

9. “I must tell you friendly in your ear, sell when you can, you are not for all markets.”

10. “If thou wilt needs marry, marry a fool; for wise men know well enough what monsters you make of them.”

13. “Methink’st thou art a general offence and every man should beat thee.”

14. “More of your conversation would infect my brain.”

18. “The rankest compound of villainous smell that ever offended nostril”

19. “The tartness of his face sours ripe grapes.”

21. “Thine forward voice, now, is to speak well of thine friend; thine backward voice is to utter foul speeches and to detract.”

22. “That trunk of humours, that bolting-hutch of beastliness, that swollen parcel of dropsies, that huge bombard of sack, that stuffed cloak-bag of guts, that roasted Manningtree ox with pudding in his belly, that reverend vice, that grey Iniquity, that father ruffian, that vanity in years?”

23. “Thine face is not worth sunburning.”

33. “Thou damned and luxurious mountain goat.”

38. “Thou sodden-witted lord! Thou hast no more brain than I have in mine elbows “

40. “Thou whoreson zed , thou unnecessary letter!”

42. “Thy tongue outvenoms all the worms of Nile.”

43. “Would thou wert clean enough to spit upon”

47. “You scullion! You rampallian! You fustilarian! I’ll tickle your catastrophe!”

49. “Your brain is as dry as the remainder biscuit after voyage.”

52. “Heaven truly knows that thou art false as hell”

54. “No longer from head to foot than from hip to hip, she is spherical, like a globe; I could find countries in her.”

55. “You have such a February face, So full of frost, of storm, and cloudiness.”

Got the hang of Shakespeare insults and want to try your own? Have a go using the Shakespearean insult generator chart below – simply combine one word from each of the three text columns below, and prefix with a “Thou”.

Can you create the perfect insult for Lady Macbeth to deliver? Our personal favourite using the Shakespearean insult generator  – “Thou gorbellied, toad-spotted miscreant” Let us know yours in the comments section below! 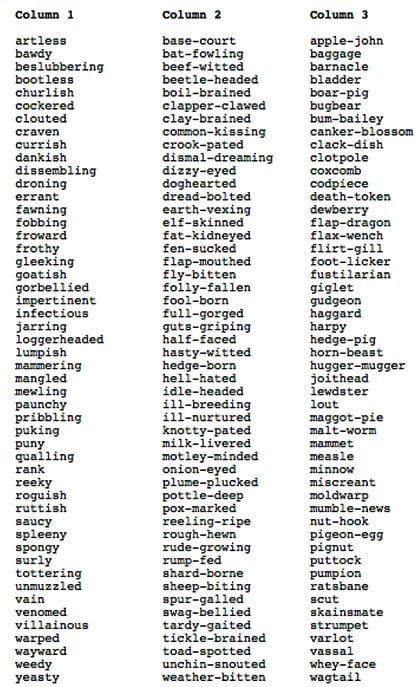 This stunning Shakespeare insults chart was put together by Charley Chartwell.  It charts 100 of Shakespeare’s greatest zingers, sorted by topic, with each insult labelled with the Shakespeare play it comes from. 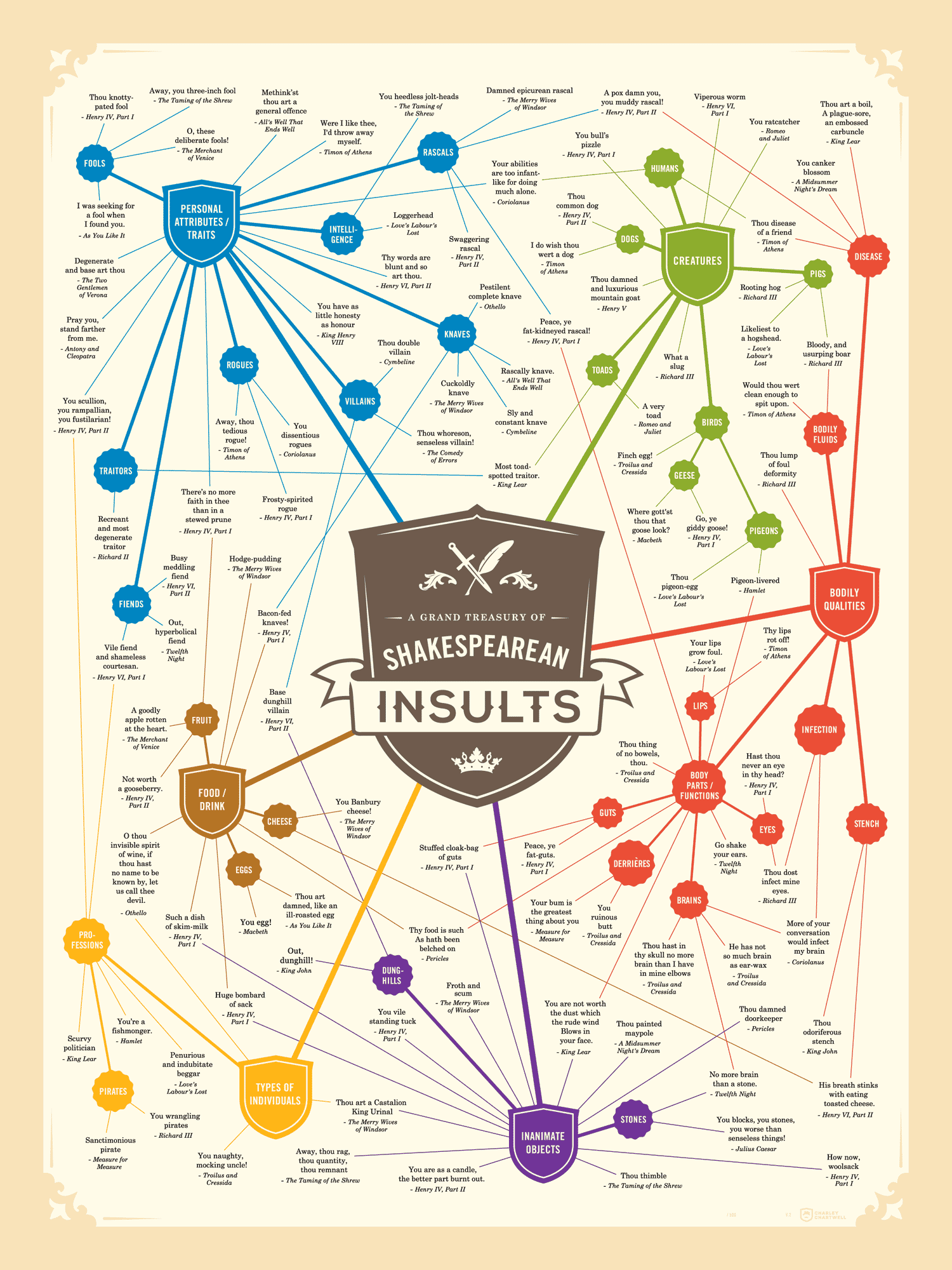 Read enough Shakesperean insults? Check out our lists of words and phrases that Shakespeare invented & some interesting facts about Shakespeare.