Blackfriars Theatre was built by Richard Burbage in on the north bank of the Thames in 1596. Burbage purchased the building for £600, and in the space constructed two galleries to increase the potential attendance size.

The King’s Men took on the lease of the Blackfriars from Richard and Cuthbert Burbage in August of 1608, for a period of twenty-one years at 40 pounds per year, with each member of the troupe holding a seventh share. They performed there during the winter months while continuing to spend the summers at the Globe. 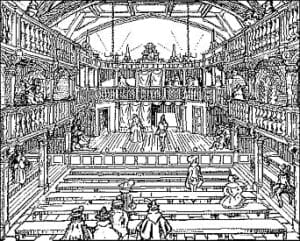 As a private theatre Blackfriars Theatre had a special status. There were strict regulations on public playhouses within the bounds of the city wall, but the private theatres in London were built upon grounds that belonged to the church – grounds that had been appropriated by Henry VIII and were therefore not under the control of the Lord Mayor of London.

Private theatres were altogether more exclusive and expensive than the public theatres. The price of admission to Blackfriars was five times that of the Globe and it quickly became a top London theatre. It was built along the same lines as the public theatres, with  trap doors, superstructure of huts (with wires and belts to hang props), inner stage, and tiring house, but protected from the elements by a roof, and was lit by artificial lighting. Unlike public theatres, private theatres such as the Blackfriars had roofs and specifically catered to the wealthy and highly educated classes of London society.

Shakespeare was one of the shareholders of Blackfriars Theatre.  For more than half of his career in London Shakespeare shared in the enterprise of the Lord Chamberlain-King’s Men company as actor, patented member, dramatist, and housekeeper, first of the Globe and then of both the Globe and the Blackfriars. One could say that as the main writer for The King’s Men and the Blackfriar’s Theatre, and one of its proprietors, he really made it in the world of theatre.