This article describes the entertainment on offer during a day out around the Globe Theatre in Shakespeare’s time. (After some quick and interesting facts on the Globe Theatre, or want to know the story about building the old Globe Theatre?)

During Shakespeare’s time London’s population was around 200,000. There was a great gap between the rich and the poor, but no matter how much money they had, whether they were of high, middle or low social rank, they all had one thing in common: their delight in, and attendance at, the entertainment that London offered. The three major attractions were bear baiting, cockfighting, and theatre. The venues were situated in the same areas so people could have a day out and enjoy all three of them, one after the other if they wanted to.

Bear baiting was a huge attraction, even enjoyed by Queen Elizabeth. The spectators sat on benches in the round arena. The bear was tethered to a stake in the middle of the ring, able to move only a short distance before being drawn up sharply when it got to the end of its tether. That’s where the phrase ‘at the end of my tether’ comes from – the frustration and agony of not being able to go any further. Dogs would be released to taunt the bear, and the excitement came from the tension between the bear and the dogs. The most agile dogs would be able to spring away, out of the bear’s range, but any mistakes would be fatal: a bear would kill several dogs before itself occasionally becoming the victim. The crowd would roar its encouragement to the bear.

Shakespeare frequently refers to bear baiting in his plays, using it as a metaphor for his characters’ situations. In Julius Caesar , when Octavius Caesar and Antony are surrounded by the forces of Brutus and Cassius, Octavius cries, ‘We are at the stake/ And bayed about by many enemies.’ When Macbeth is cornered in Dunsinane castle he sums up his situation in similar terms, using the memorable quote: ‘They have tied me to the stake; I cannot fly/ But bear-like I must fight the course.’ 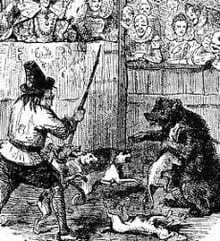 Cockfighting was done in small round theatres known as cockpits. The spectators sat in a circle cheering the birds on. The fighting was vicious and sometimes lasted for four or five hours, with feathers flying and blood splattered all around. The spectators placed bets, which could amount to considerable sums. The chorus in Henry V asks: ‘Can this cockpit hold the vasty fields of France?’ 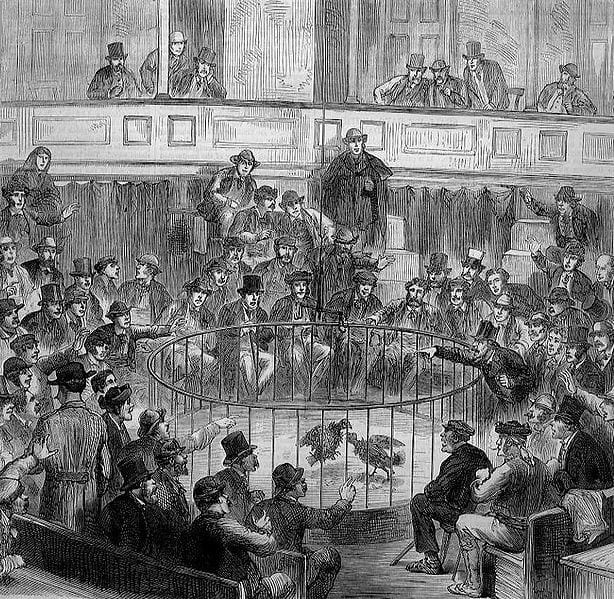 Bear baiting and cock fighting  catered for and generated a taste for violence in Elizabethan Londoners and that, perhaps, explains the violence in Elizabethan and Jacobean plays. Competition among the theatres was fierce, too. Between 1576, when the first public theatre, The Theatre, was built, and 1614 when the second Globe Theatre opened, there were sixteen theatres for the small population of 200,000. The public theatres were very cheap and the poor could buy a ticket for a penny and stand on the ground in front of the stage. Hence the term, ‘groundlings‘.

The oldest theatres were The Theatre and the Curtain Theatre. They were built and owned by a carpenter, James Burbage. The Rose Theatre was built in 1587 and the Swan in 1595. When James Burbage died, his son, Cuthbert, dismantled The Theatre and it was moved to a site in Southwark, near the Rose. That was the first Globe, built in eight months by twelve carpenters. To fund the project, Burbage took his brother, Richard, and five other actors in the Chamberlain’s company, into partnership and dealt them shares in the company. Shakespeare was one of those actors and he became a ‘householder’, which was the word for shareholder.