In 1576, when William Shakespeare was a twelve year-old schoolboy in Stratford, an English actor, James Burbage, built one of the first public theatres in England since Roman times just outside London, in Shoreditch (in fact it was supposedly the second permanent theatre built in the UK) . It was in this theatre, simply called The Theatre, that Shakespeare began his acting and writing career, with The Lord Chamberlain’s Men, a theatre company led by Burbage. It was here that Shakespeare met Burbage’s son, the great actor Richard Burbage, who was to become his friend and partner and play the leading roles in his tragic dramas.

Burbage built The Theatre on land leased from Giles Allen. Allen was a staunch puritan who disapproved of his land being used for such entertainments but allowed the project to go ahead. The building was a large, polygonal, three-story timber structure, open to the elements. Its exterior was coated with lime and plaster. It had features that were to become standard in Elizabethan theatres such as galleries, upper rooms, a tiring house, and trap doors in the stage floor. It had had two external staircases, standing on either side of the building, and leading up to the galleries. It was the prototype for the scores of theatres that were to spring up near London. 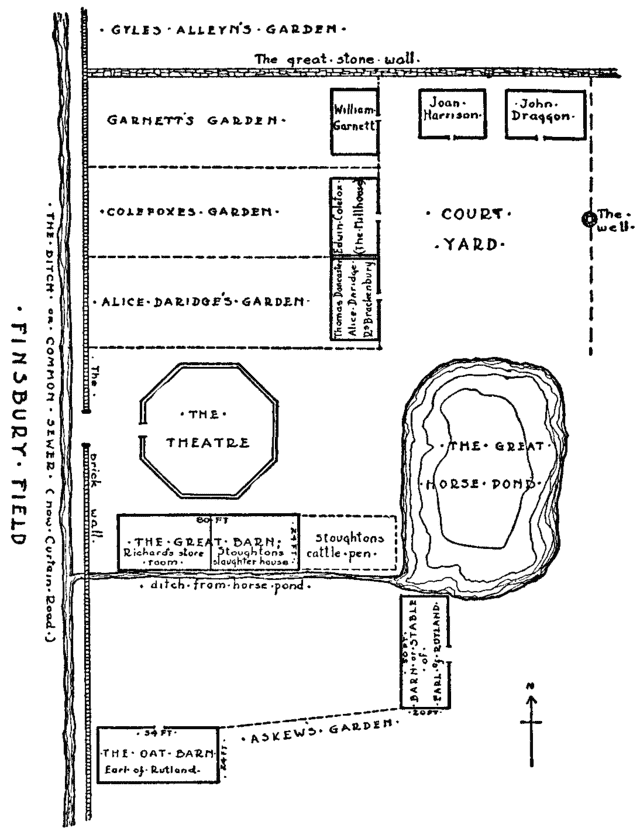 The Theatre fell victim to government censorship, due to the production of Thomas Nashe‘s play Isle of Dogs and that led to all of the London theatres being closed for the summer of 1597. The Theatre did not reopen: the lease had expired and Allen refused to renew it. The Burbages dismantled the building and used the timber to build a new theatre on the south bank of the Thames – the Globe, probably the most famous theatre in English theatre history.

Shakespeare’s earliest plays were performed at The Theatre. When the company moved to the Globe Shakespeare became a partner in the company and eventually became wealthy partly as a result of that.