The term sonnet is understood by most people as a form of poetry, but there’s more to a sonnet than simply being a poem. The 5 sonnet examples below are from a range of authors and will introduce you to the structure and tempo of the sonnet form, and help you understand the true essence of a sonnet.

Before we dive into the 5 sonnet examples with explanations, here’s a quick recap on what a sonnet is, and how the poetic form evolved:

What is a sonnet?

The term “sonnet “comes from the Italian word “sonetto” which means “to sound”, or “to ring”. Sonnets are poems of expressive ideas or thoughts that can take a number of different forms, but always have two things in common:

1. All sonnets have fourteen lines

Need more on the basics of sonnets before reading the example sonnets below? Read our in-depth guides to what is a sonnet, what is iambic pentameter, and how to write a sonnet.

The evolution of the sonnet form

It’s thought that sonnets originated in Sicily in the 13th century. In the 14th century Italian Renaissance poet, Francesco Petrarch perfected the form, after which this classical form of poetry eventually spread across Europe.

After Francesco Petrarch, many European poets made the sonnet their own creative format – Pierre de Ronsard in France, Edmund Spenser, Sir Philip Sidney, John Donne and, of course, William Shakespeare in England and Opitz and Goethe in Germany. Much later the sonnet form found a home in America, where Longfellow, E. A. Robinson, Elinor Wylie, and Edna St. Vincent Millay all established themselves as masters of the form.

I’ve seen it rain on sunny days
And seen the darkness flash with light
And even lightning turn to haze,
Yes, frozen snow turn warm and bright
And sweet things taste of bitterness
And what is bitter taste most sweet
And enemies their love confess
And good, close friends no longer meet.

Yet stranger things I’ve seen of love
Who healed my wounds by wounding me.
The fire in me he quenched before;
The life he gave was the end thereof,
The fire that slew eluded me.
Once saved from love, love now burns more.

We’ve used this as the first of the 5 example poets as it was written by Italian Giacomo da Lentini, who is generally regarded as the creator himself of the form. The title belies the fact that the sonnet is actually about the strangeness of love, and the immense impact it has had on the speaker.

Loving in truth, and fain in verse my love to show,
That she, dear she, might take some pleasure of my pain,
Pleasure might cause her read, reading might make her know,
Knowledge might pity win, and pity grace obtain,
I sought fit words to paint the blackest face of woe;
Studying inventions fine her wits to entertain,
Oft turning others’ leaves, to see if thence would flow
Some fresh and fruitful showers upon my sunburn’d brain.
But words came halting forth, wanting invention’s stay;
Invention, Nature’s child, fled step-dame Study’s blows;
And others’ feet still seem’d but strangers in my way.
Thus great with child to speak and helpless in my throes,
Biting my truant pen, beating myself for spite,
“Fool,” said my Muse to me, “look in thy heart, and write.”

Sidney’s Astrophil and Stella was written in the early 1580s as one of the first sonnet sequences written in English, and is interesting also for its use of twelve-syllable lines rather than ten-syllable lines.

Shall I compare thee to a summer’s day?
Thou art more lovely and more temperate:
Rough winds do shake the darling buds of May,
And summer’s lease hath all too short a date:
Sometime too hot the eye of heaven shines,
And often is his gold complexion dimm’d;
And every fair from fair sometime declines,
By chance or nature’s changing course untrimm’d;
But thy eternal summer shall not fade
Nor lose possession of that fair thou owest;
Nor shall Death brag thou wander’st in his shade,
When in eternal lines to time thou growest:
So long as men can breathe or eyes can see,
So long lives this and this gives life to thee.

Perhaps the most famous of any love sonnets is Shakespeare’s sonnet 18, where Shakespeare addresses a young man to whom he is very close. It would be impossible to say whether Shakespeare was an arrogant man because we don’t know what he was like. We also don’t know whether he thought he was the ‘great,’ immortal writer that we regard him as today. However, after describing the young man’s great beauty, he suggests that his poetry is ‘eternal’ and ends by stating that as long as there are people who can still read, the sonnet, and therefore the description of the young man’s beauty, will still be there.

Death, be not proud, though some have called thee
Mighty and dreadful, for thou art not so;
For those whom thou think’st thou dost overthrow
Die not, poor Death, nor yet canst thou kill me.
From rest and sleep, which but thy pictures be,
Much pleasure; then from thee much more must flow,
And soonest our best men with thee do go,
Rest of their bones, and soul’s delivery.
Thou art slave to fate, chance, kings, and desperate men,
And dost with poison, war, and sickness dwell,
And poppy or charms can make us sleep as well
And better than thy stroke; why swell’st thou then?
One short sleep past, we wake eternally
And death shall be no more; Death, thou shalt die.

Written in 1663, in this sonnet John Donne personifies death as a male braggart, boasting of the many people he has killed. Throughout the sonnet, the speaker uses a metaphor to describe how death is impermanent.

One foot down, then hop! It’s hot.
Good things for the ones that’s got.
Another jump, now to the left.
Everybody for hisself.
In the air, now both feet down.
Since you black, don’t stick around.
Food is gone, the rent is due,
Curse and cry and then jump two.
All the people out of work,
Hold for three, then twist and jerk.
Cross the line, they count you out.
That’s what hopping’s all about.
Both feet flat, the game is done.
They think I lost. I think I won.

We’ve included this final sonnet example to show that the sonnet form can keep on evolving, yet still be considered a sonnet. Maya Angelou’s sonnet contains three quatrains and a final couplet held together by a strict rhyme scheme and meter. Yet the rhyme pattern is dissimilar to all the previous examples, and the sonnet is written in trochaic tetrameter(i.e. even or eight syllables with an alternating stress starting on the first syllable) rather than iambic pentameter.

What do you think of these 5 sonnet examples? Any questions, or any other sonnets you’d like to see on this list? Join in using the comments section below! 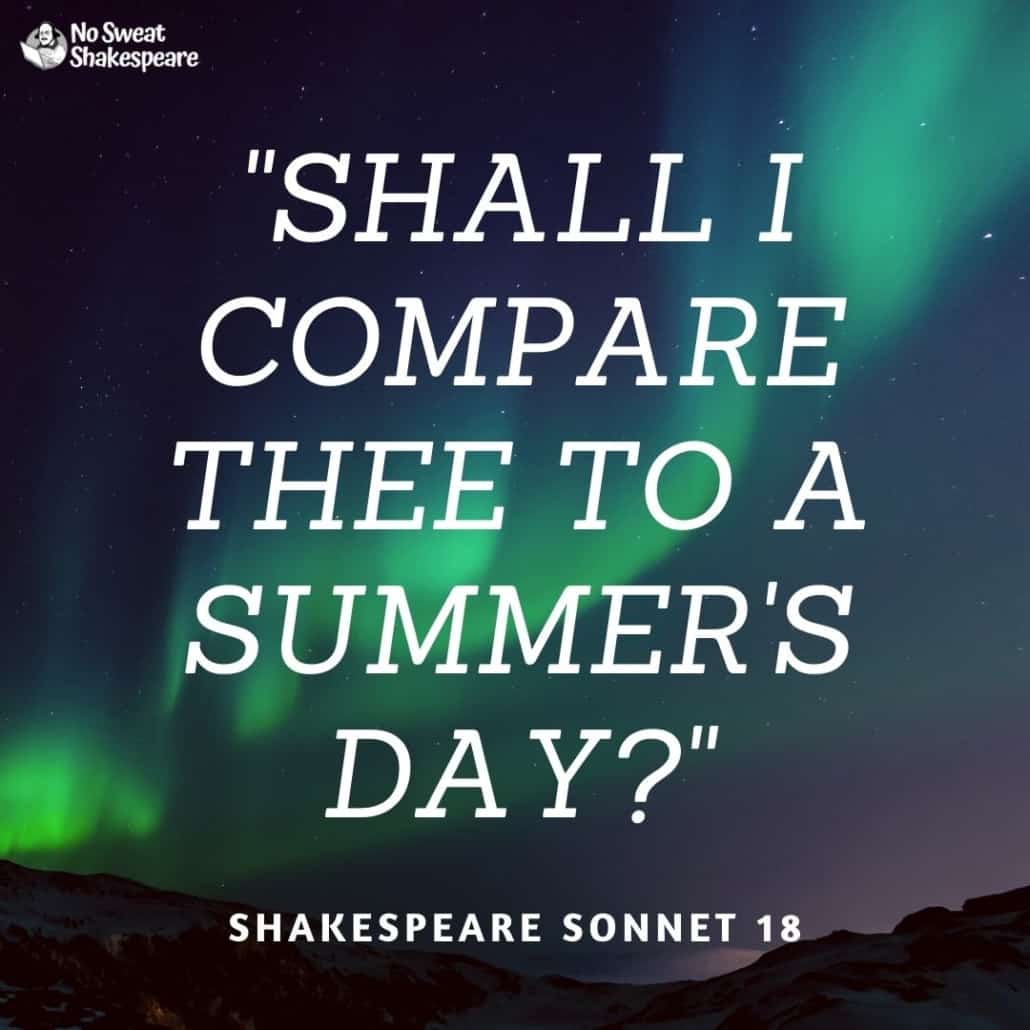 Shakespeare’s sonnet 18 – one of the best sonnet examples