You are here: Home1 / Stratford Upon Avon Things To Do2 / Anne Hathaway’s Cottage, Shottery

Anne Hathaway’s Cottage takes you by surprise. It is easy to regard the property as an afterthought: after trudging around Stratford, spending hours at each of the wonderful Shakespeare attractions, there’s one more thing to do that’s not in the Stratford loop – Anne Hathaway’s Cottage in the nearby village of Shottery.  Shottery lies in a  small wooded valley on the fringes of Stratford – though in Shakespeare’s day would have been an area of fields and farms – a five-minute drive from the centre of Stratford. 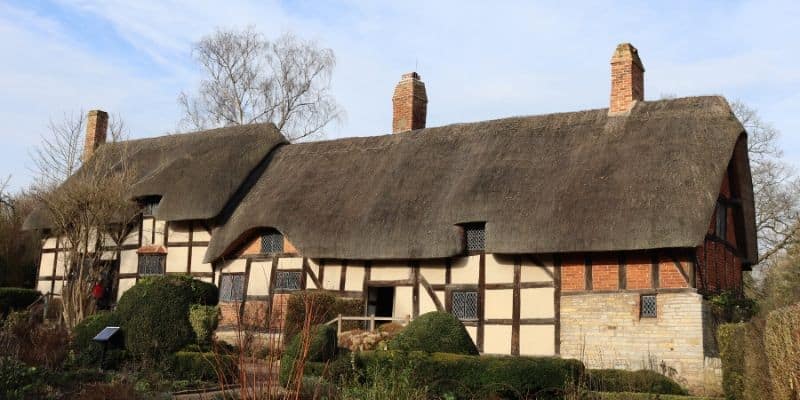 Anne Hathaway’s Cottage is surprising in that it brings you closer to William Shakespeare than any of the other Shakespeare sites. One of the reasons is that the Hathaway family, still alive and kicking in the area, lived in the house for four hundred years continuously – thirteen generations of them – and only vacated it in 1917, by which time it had been acquired by the Shakespeare Birthplace Trust. The stories that were handed down were, therefore, more channeled and, above all, there are some artifacts in the house that could actually have been owned by Anne’s Elizabethan family. Whereas period furniture was acquired from antique dealers for all the other Shakespeare-associated buildings it is tempting to think that there are still some actual items of furniture that Shakespeare would have been familiar with in Anne Hathaway’s Cottage. 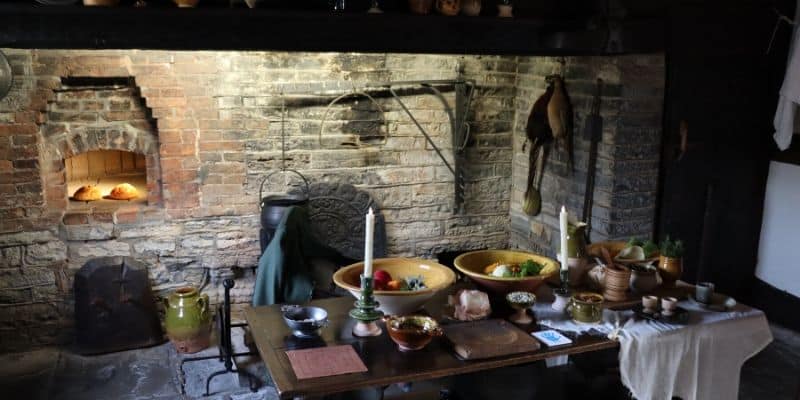 The ‘cottage’ in Anne’s time was a 90-acre farm with a farmhouse that would have been much smaller than the present-day building, and of one story only. Anne’s brother Bartholomew extended the cottage when he owned it, and descendants of Bartholemew added an upstairs floor. As you walk through the cottage you walk through time, with each room decorated with furniture from different periods from the mid-1500s to the late 19th century. 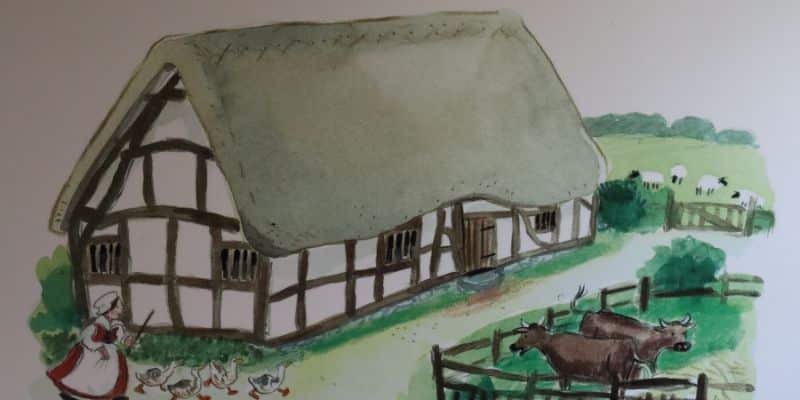 A depiction of what Anne Hathaway’s Cottage would have looked like in the 16th century – one story and a much smaller footprint than today.

Tourists, particularly of the pilgrim kind, are always determined to link items of furniture to the historical figure they are pursuing and the ‘courting chair’ is a great opportunity for that. An armchair that had been in private ownership for two hundred years was recognised at an auction in 2002 by an expert, who made a bid for it and returned it to the cottage. It seemed to be the right age and it had actually been owned by Shakespeare’s granddaughter, Elizabeth. It also has Shakespeare’s coat of arms carved on the back, and ‘WAS’ (for William and Anne Shakespeare perhaps?) on the upright part. The problem here, though, was that it was Samuel Ireland who had owned the chair, which he had bought from the Hathaways during one of the family’s fallow periods. The 18th century author and engraver was exposed as a forger, particularly of Shakespeare artifacts, and it’s now thought that the carvings were probably examples of his forgeries. If the chair did once belong to Shakespeare it would be cutting things very fine because it dates to a time no earlier than a few years before his death and so, sadly, cannot be a chair that he sat in while courting Anne.

The widowed Richard Hathaway, died the year before her marriage to William in 1582. As a prosperous yeoman farmer, he had been a respected citizen. He had known William’s father, John Shakespeare, and had business dealings with him. That was probably how his daughter and Shakespeare’s son had come to know each other. It seems that soon after Hathaway’s death the young couple’s friendship took a more serious turn, with William’s visits to Anne Hathaway resulting in a pregnancy.

One can imagine the young man eagerly walking the mile and a half from his home in Henley Street to be with his mistress. There is a high-backed fireside settle in the cottage. The Victorian Hathaways, always with an eye to the blossoming tourist trade, welcoming and charging visitors, claimed that this was where William and Anne sat together holding hands, cooing, and staring into each other’s eyes, but the couple had been long dead by the time the settle was made: the oldest part of it dates to the mid 18th century. It’s a lovely thought though.

So much of what we think we know about Shakespeare is conjecture because there are so few records of his life compared with the number of records for most famous people of the time. One thing we do know for sure, however, is that Shakespeare left his second-best bed to Anne in his will. He did that in writing to make sure that no-one would deprive her of the marital bed where she had slept with him and where their children had been conceived and born.

Beds were the most valuable things any family-owned so the bed would have been looked after, and after Anne’s death no-one would have dreamt of disposing of it. But what happened to it? This is where we once again find ourselves in the realm of conjecture. Whereas there are several stories about every Shakespeare consideration, such as what he looked like, the circumstances of his death, his father’s underworld career, why he went to London, and so on, there is only one story about William Shakespeare’s second-best bed: that it ended up back in the cottage where Anne grew up and where the Hathaway family still lived. That may not be a true story but there is no contradictory narrative.

One of the beds in the Cottage definitely dates back to the lifetime of Anne and William. Known as ‘The Hathaway Bed’ it is popularly identified with the second-best bed of Shakespeare’s will. It is a strong, heavy, carved, oak bed and we do know that it has been in the cottage for several generations. The possibility of it’s being the couple’s marital bed is there. And although that’s the proud claim of the Hathaway family and the Anne Hathaway’s Cottage, that’s as much as one can say. 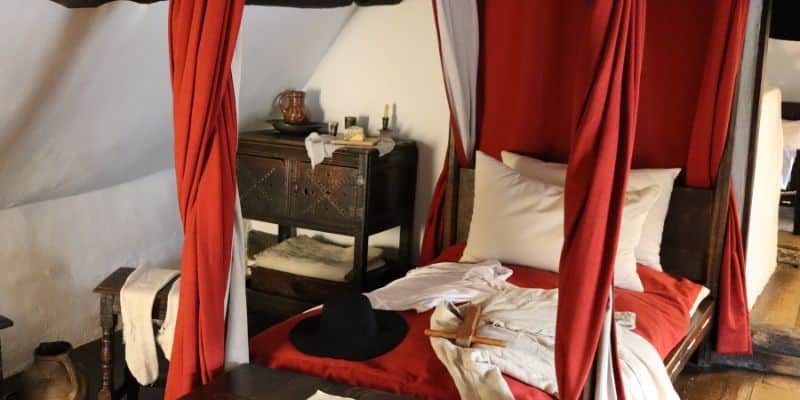 Could this be WIlliam and Anne’s marital bed, the famed ‘second best bed’ he left Anne in his will?

And so, a visit to ‘Anne Hathaway’s Cottage’ offers a delicious closeness to Shakespeare, even though the imagination has to be a little stretched. There are other minor but intriguing things that will allow you to place yourself in the time as well as your already being in the place. You will walk on the original stone floor in the kitchen and be able to touch the original wooden beams holding up the ceiling: you can see a board game that looks very much like checkers and a writing kit for children. There’s an essential item for a refined lady – a ‘sweet bag.’ It’s a little cloth bag which a lady would stuff with aromatic plants and hang around her neck with the odour of herbs going straight up her nose. In that way, she would be able to alleviate the effects of the foul smells that pervaded the atmosphere wherever human beings and animals lived in close proximity. Much as we may love to insert ourselves into the period the smell of Elizabethan humanity is something that, fortunately, we don’t have to experience when we visit Stratford.

In the summer, sitting at the cafe you’re surrounded by an amazing array of colour. The garden is well-known for being a perfect example of a cottage garden. However it is very much a 21st century cottage garden, a continuation of the classic 20th century cottage garden – no large lawn, no livestock, kept alive by captured washing-up water and fertilized by tealeaves and potato peels.

You should not think that you are in any way walking in the garden as William Shakespeare knew it. This garden was designed in the 1920s. It’s delightful and smells divine. If you were transported back to Elizabethan Shottery you would not enjoy walking in it. It would have been pretty messy. Any plants growing there would not have been planted for their visual beauty but for their medicinal value, including strong-smelling herbs to be strewn on the cottage floor to mask the stench.

The front part of the garden was reserved for pigs and chickens, although there would have been a cabbage or onion patch too. As the centuries went by that arrangement remained unchanged, but then, in the 19th century the garden became more decorative. And at the beginning of the twentieth century, the celebrated Edwardian gardener, Ellen Willmot, took it on. She filled the front with colourful flowers and introduced the mown paths through the orchard. The garden took off from there, and arrived at its present state as a result of such historical layering.

Visiting Anne Hathaway’s Cottage is something that will be a lasting memory. 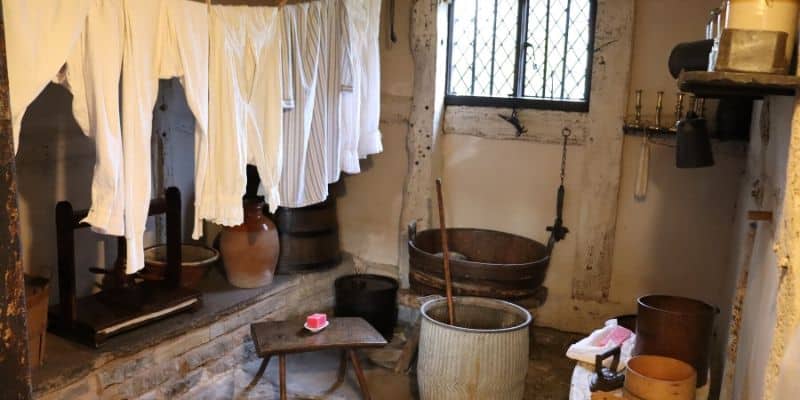 The buttery storage room, so called because perishable items were stored in buts, or barrels

Have you been to Anne Hathaway’s cottage and have any visitor tips? Let us know in the comments section below!