You are here: Home1 / Stratford Upon Avon Things To Do2 / Hall’s Croft, Stratford

Hall’s Croft is the place in Stratford that gives the best indication of how well William Shakespeare had done for himself just twelve years after leaving Stratford for London. Although he never lived in the house, he would have enjoyed the same standard of living in his own house, the nearby New Place. Hall’s Croft was the home of his daughter Susanna and her husband, the prominent physician, Dr John Hall. 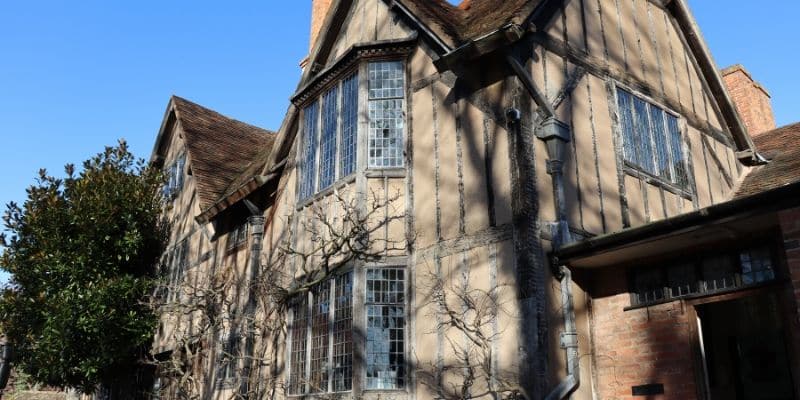 A great deal of restoration work has been done on Hall’s Croft over the centuries and there is not much of the original interior left. The furniture is authentic for the period – and very beautiful it is too – but none of it is the actual furniture used by the Halls.

As you step into the Entrance Hall, though, you stand on the original flagged stone floor and face the unaltered stone fireplace. Both were status symbols. Patients and other visitors knew, as soon as they entered the house, that they were dealing with someone of importance.

In Elizabethan and Jacobean culture the practice of boldly displaying personal wealth was even more pronounced than it is in our modern culture. A stone floor in a town where less well-off people had no floor at all – only bare earth – was an object to be much desired and envied and its owners to be respected. And on entering the Parlour one is struck by even more enviable phenomena. Dr Hall was the owner of a fine, turned heavy oak chair. Chairs were crafted to achieve a combination of beauty and strength: making a chair was a time-consuming job for a well-paid craftsman and was therefore expensive. That and the carved table in the room where the Halls entertained guests were, apart from their bed, the most prestigious items they owned. 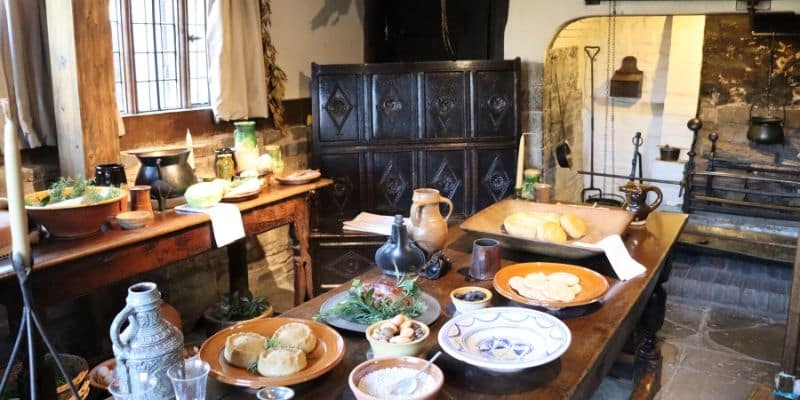 The kitchen at Hall’s Croft, complete with Tudor meal laid out

When the family dined the senior male present would sit on the chair while the others would occupy benches, which were the normal seating places in Elizabethan homes. When Susanna’s parents visited her father would take the chair, at the head of the table. Shakespeare would thus be the chair man for the evening and, in fact, as they were at dinner, the ‘chairman of the board,’ which is where the term originates. When it was just the family John Hall would be the chair man.

The Parlour was their best room. If it all seems a bit distant from our time look for the baby’s high chair – something we all have in our homes at some point – placed out of the way against the wall, but available for visiting babies. The Buttery is filled with models of common food items of the period but the kitchen has been changed. Cooking was done outside the house for fear of a fire catching on and burning the house down. Susanna or her servants would have cooked on a hand-turned spit on an open fire in the garden. Also downstairs there was a room set aside for the Doctor’s practice. The dispensary, where his apothecaries made the remedies that he prescribed, is adjacent to the buttery. 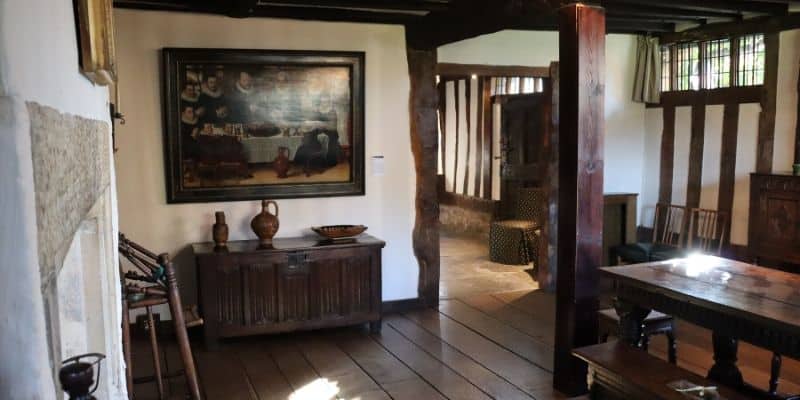 The Halls would not recognise the upper floor today, apart from a small room at the back that has some of the original Jacobean glass in its window and that might have been their daughter Elizabeth’s room. The small chair has its original Stuart fabric. The whole upper floor has been redesigned but one can still get the idea. The Master Bedroom, added in the late 17th century is furnished with an array of bedroom furniture, including a four-poster tester bed – another expensive and highly prestigious item – a commode cabinet and a cradle.

Much of the upper floor is taken up with an exhibition of Tudor medicine. Physicians who dealt in remedies, as Hall did, were herbalists, and the exhibition emphasises that. One of the treasures is a copy of The herbal or Generall historie of plantes, John Gerard’s 1597 book, the most influential book ever written about the medical uses of plants. 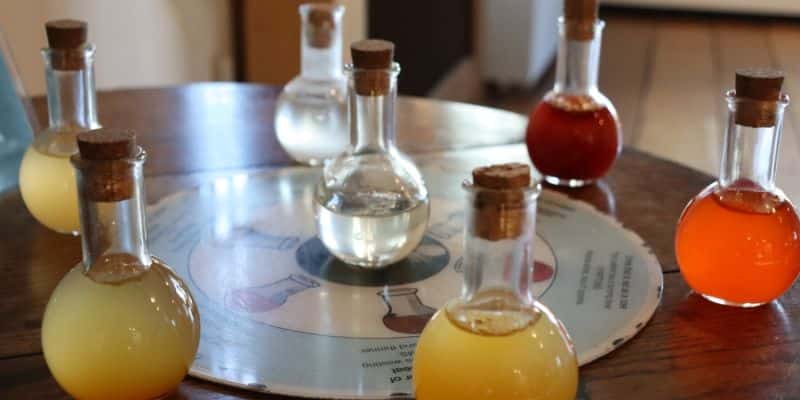 An exhibit of urine in glass vials, upstairs at Hall’s Croft

Dr Hall would have required fresh herbs and grown them himself. Researchers established a herb garden in 1999 that approximates to the section of his garden that Hall would have used for the cultivation of the plants he needed and experts have supervised the planting of herbs that Hall would have grown there. Apart from that, though, the garden looked nothing like what one sees today – beautiful colourful flowerbeds, mowed lawns, cropped hedges and neat paths. There would have been a lot of mud and animal waste. There would also have been the usual cabbage and onion patches and some fruit trees. There were animals. As a self-respecting, upper middle-class professional man Hall had a pigsty rather than a free-for-all arrangement for his pigs. There were also cows, goats and chickens inhabiting the garden.

After the Halls left to live in the house that they had inherited from Shakespeare Hall’s Croft lay empty for ten years before being sold to the Smiths and, subsequently, a series of others, who effected multiple changes, until the Shakespeare Birthplace Trust bought it in 1949 and turned it into a museum.

Have you visited Hall’s Croft and have any tips or info to share? If so, please get invovled in the comments section below! 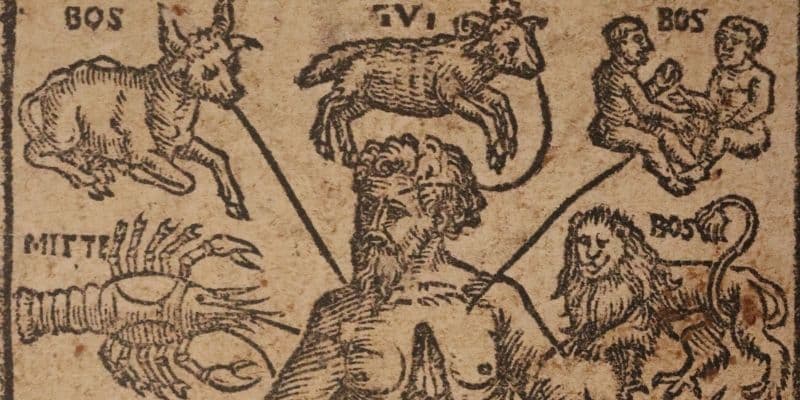 Etching showing the astrological signs, taken from a medieval medical book on display at Hall’s Croft