You are here: Home1 / Stratford Upon Avon Things To Do2 / Shakespeare’s School & The Guildhall, Stratford

The Guildhall and Shakespeare’s school has been the pride of Stratford upon Avon for 700 years and, indeed, the pride of the Shakespeare tourist route. In Shakespeare’s time the large building was used both as the Guildhall for the borough council meetings, and as the local grammar school that William attended – at the time called the King’s New School, and today still operating as the King Edward VI Grammar School.

The Guildhall and Shakespeare’s school has been the pride of Stratford upon Avon for 700 years and, indeed, the pride of the Shakespeare tourist route. In Shakespeare’s time the large building was used both as the Guildhall for the borough council meetings, and as the local grammar school that William attended – at the time called the King’s New School, and today still operating as the King Edward VI Grammar School.

It is a long building that stretches along Church Street and, certainly because of Shakespeare’s fame and the tourism that began quite soon after his death, the development, alterations, and demolitions that other medieval buildings were subjected to in Stratford spared the Guildhall and left it as a distinctly Tudor building. It has so much to do with William Shakespeare that a few hours spent there offers a complete course in solving the mysteries that surround his position as the world’s number one writer of plays. It is in this building that William Shakespeare received his formal education and where he would have had his early encounters with plays and theatre generally. 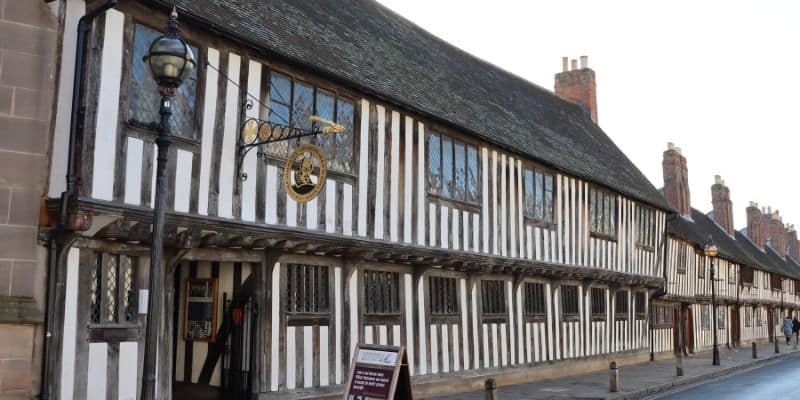 The Tudor Guildhall was the equivalent of the modern town hall combined with the modern law court. It was the seat of government, ruled over by the Borough Council, which was also responsible for the Court of Record. The Bailiff was at the head of both, effectively both mayor and magistrate. Shakespeare’s father John served the public for more than a decade. On arriving in Stratford from his birthplace five miles away in 1551 he established a glove-making business. He raised his social status by marrying Mary Arden about five years later, and that gave him a pass to the local civil service. From Ale Taster he rose through the ranks – Constable, Chamberlain (borough finances), Alderman and, finally in 1568, the top job, Bailiff.

John Shakespeare’s story as a local government official is key to an understanding of the Shakespeare phenomenon, for two main reasons. Firstly, his position facilitated his sons’ entry into the grammar school, and secondly visiting players performed in the building after being auditioned by the Bailiff and other senior officials.

The pupils or some of the pupils at the Tudor Edward VI Grammar School would have been brought in as part of the audience when players performed at the Guildhall. Certainly, the sons of the Bailiff and the Aldermen would have had that opportunity. Performances were far more of collaborations between audiences and actors than they are today and there would have been audience participation. Moreover, pupils were often recruited to be extras in performances so Shakespeare may have appeared on a stage at any time from the age of 7. It is quite natural to think that it is that experience that hooked him because it seems that whatever other reason he may have had to go to London – and there are all kinds of theories about that, including that he went there on business for his father – he immediately fell in with the theatre community, and stayed with it until his retirement.

Visitors to the Guildhall can see the different rooms where the various functions were effected. Downstairs there is a reception and exhibition showing how the space would have looked when the Borough Council were in session, as well as a medieval chapel with murals in various stages of restoration. The other space of interest on the ground floor is a room where legal contracts were agreed, known as the ‘agreeing room.’ Visiting players used it to prepare for their performances, and ‘agreeing room’ eventually became corrupted to ‘green room,’ – the origin of today’s theatre term. 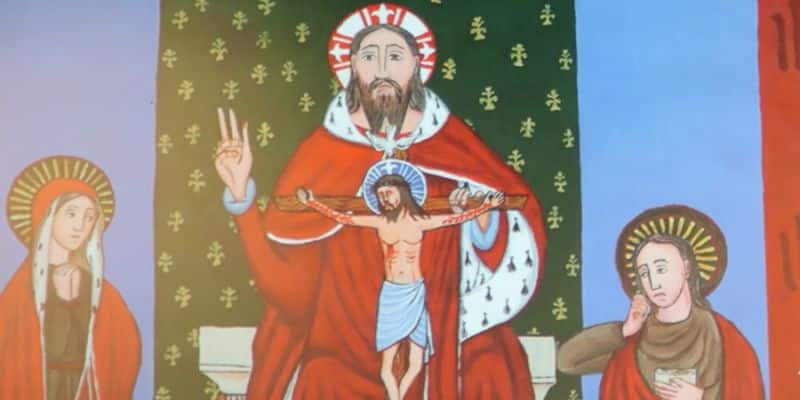 The restored religious wall painting in what was the private priests room at the Guildhall, now Shakespeare’s school

Moving upstairs is the Master’s Chamber (the headmaster’s study) and occasional residence, used in the 19th century as the prefects’ room. In the centre of the room is a long oak table, densely carved with centuries’ worth of prefects’ names, some of them of famous men. In fact, the school claims that the table is the only item of furniture for which they have no receipt, and it arrived at around the time Shakespeare’s New Place home opposite was demolished, leading them to belive the table may have belonged to Shakespeare at one point.

The most interesting room – the one that excites tourists the most – is the schoolroom itself. Visitors are surprised to find that, although one half of the room has rows of the kind of school desk we may recognise, they are only about two hundred years old. The other half is set out as it would have been to greet the young Shakespeare boys every morning. Pupils sat on forms – long boxes – with lids that could be raised to hold their satchels and anything else that had to be put away. This is where they would be instructed to go to the top or the bottom of the form, and of course, they were divided by form – first form, second form etc. –  just as they are in English grammar schools today.

Entering that schoolroom is sublime. You are greeted by the Master, sitting at his raised Tudor desk, dressed in period costume. He will tell you to sit down and be quiet. You will want to behave yourself because he will be restlessly toying with the large birch in front of him. He will ask questions and rebuke you if you talk and tell you to put your cell phone away. The other half of the long room has a lesson with children from the school, which is a modern functioning secondary school, but proudly, the school that Shakespeare went to. Some of the lessons are held in the Schoolroom so that the children will have the experience of being taught in the same room as Shakespeare. A nice thing to remember for the rest of your life. 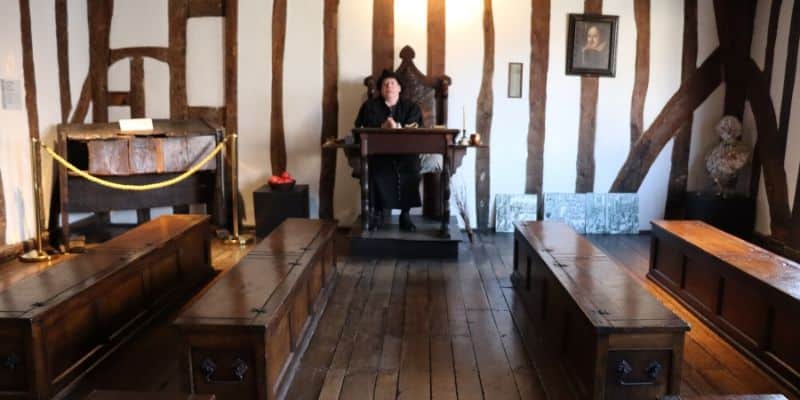 The classroom Shakespeare’s school, complete with ‘forms’ and master

Suggestions that Shakespeare wasn’t educated should be dismissed. After initial lessons in reading and writing in a Dame school he would have had seven years of a very intensive learning programme in the Classics, attending lessons every day from 6 am to about 6 pm, Monday to Saturday, including all holidays apart from important holy days, and no summer, or any other, vacation. And Shakespeare was a fast learner. When one thinks about his vast knowledge about how the world works and his understanding of how people function shown as early in his life as his twenties it’s clear that he went much further in his understanding of his school subjects than even the Master, and a seven-year stretch at school packed in a lot of material.

The language of instruction was Latin. The Master would address the pupils in Latin and they would reply in Latin. Shakespeare’s best friend in London, Ben Jonson, a man who loved Shakespeare and expressed great admiration for him as a writer, at some stage commented that he had ‘little Latin and less Greek.’ That has been a most influential comment, generally regarded as negative,  as we have tried to understand Shakespeare’s genius through the ages, but it’s possible that it was a comment playfully made, pulling his friend’s leg, knowing well how learned Shakespeare was, considering his comprehensive knowledge of Ovid, one of the most frequent sources of his plays and poems. He also read Greek and used Homer liberally. Apart from other subjects like philosophy, mathematics and music, young William would have spent the seven years learning Roman poetry by rote and reciting it to the Master. 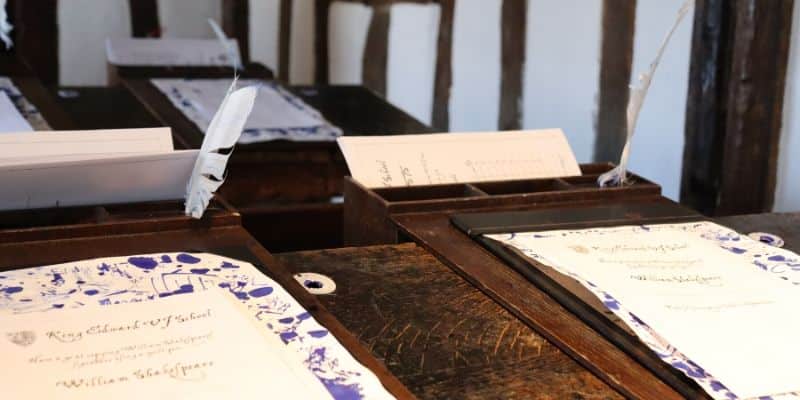 A desk at Shakespeare’s school with quill, ink and parchment

Hours: Open every day from 11am until 5pm except Chirstmas Day and Boxinfg Day.

Visits will take around an hour, with some interesting exhibits and videos on display downstairs, an opportunity to be tutored by a Tudor Master, and try your best quill and parchment writing upstairs.

Have you been to the Shakespeare Schoolroom & Guildhall and have any tips for other visitors? If so, please let us know in the comments section below!