You are here: Home1 / Stratford Upon Avon Things To Do2 / New Place, Stratford

New Place in central Stratford upon Avon is the site of the house that Shakespeare bought in 1597 as a family home. At the time the building was also known as ‘the Great House’, and was the largest house in Stratford, and the only one with a courtyard.

Although it is now demolished, New Place was an impressive house. There were ten hearths, which means it had between 20 and 30 rooms.  Towards the back of the courtyard stood a large, late-medieval Hall, where the Shakespeares and Hathaways gathered to socialise. And Shakespeare himself rebuilt the frontage and added a long gallery, in imitation of a stately home. 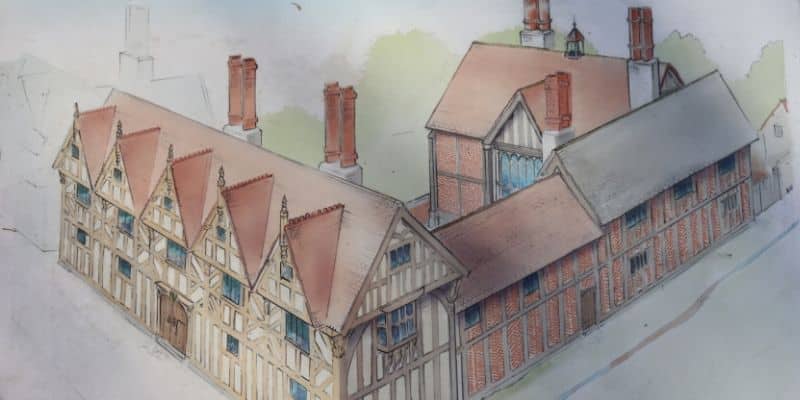 Unlike the other Shakespeare Birthplace Trust sites, New Place does not attempt to recreate Tudor life or to display Shakespeare the man. Instead, it is a brilliant invocation of the writer’s spirit – an abstract interpretation of him as the poet and play writer. The very large garden, reaching down almost to the to the Royal Shakespeare Theatre, is nothing like it was when Shakespeare lived there, although one finds him there in every step you take.  He would have looked up from his writing desk to see a working garden and farmyard with chickens, pigs, cows, stables, a physic garden of herbs and medicinal plants, the kitchens that fed the family and buildings that housed the family’s various domestic enterprises – butter and cheese-making, brewing, butchering and so on.

Perhaps the first thing that strikes you when visiting New Place, is the sheer size of the property. A prosperous family did not just have a house and a garden as we know a garden. We could almost call New Place a farm. We have to remember that we live in the third wave of western civilization, where our microtechnology provides us with everything we need, and requires no physical space. Shakespeare lived in the first wave, even before the industrial wave, where one had to rear or grow or make everything one needed – to depend on oneself, so every household needed the means and the space to do that. And so, if we want to see the physical Shakespeare family in New Place we have to imagine, not a garden for leisure, but for survival. There had to be space for growing vegetables and for grazing, without which there would be no milk or meat. 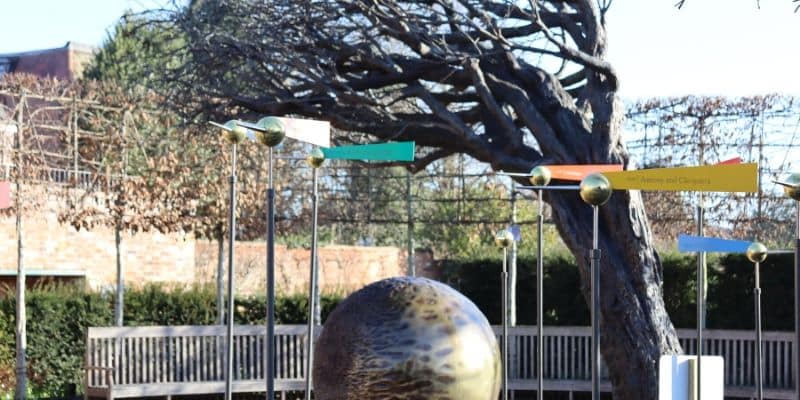 On visiting New Place, if it’s the actual buildings that interest you, you have to bear two houses in mind. The friendly attendants have artist’s impressions of both to hand and will explain the interesting history of New Place and give you a good idea of what the houses were like. The original house, the one Shakespeare bought in 1597, was built in the 1400s. He bought it from the Clopton family, who bought it back at the end of the 17th century, demolished it, and built a new one in 1702. That was later acquired by the Reverend Francis Gastrell, who demolished it in 1759, leaving a pile of rubble that was removed only after several years, leaving a vacant space, which was acquired by the Birthplace Trust in 1876.

What you see now however, is the footprint of New Place marked out on the ground, and a selection of gardens, with an indoor exhibition in the adjoining property. Walking through the area the house was cited is a perfect knot garden – a square frame of very formal design consisting of a variety of aromatic plants and culinary herbs. It is perfectly maintained, and different from its Renaissance counterpart in that it is much larger and composed of many more than the one compartment typical of the Renaissance knot garden, and far more organised. Knot gardens were very fashionable in Shakespeare’s lifetime, found mainly in large gardens owned by the wealthy. It is unlikely Shakespeare himself would have had such a garden, as he needed the land to supply food as well as grazing for his livestock. 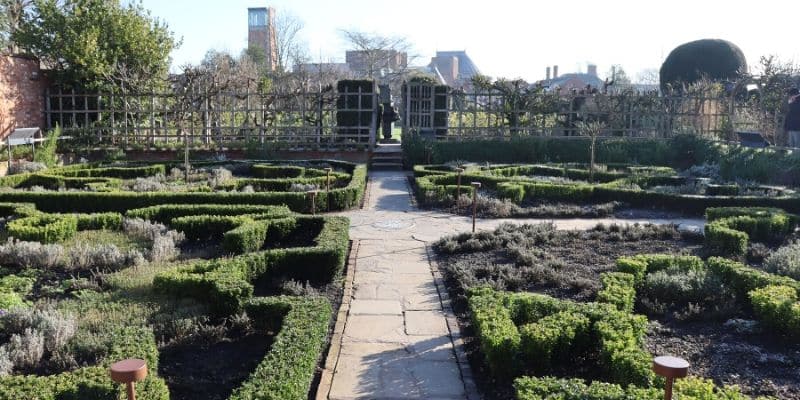 The knot garden at New Place, with views across the Great Garden to the Royal Shakespeare Theatre

Beyond the knot garden is an area now called the Great Garden. When Shakespeare bought New Place it included some of this land, which was used to grow fruit, vegetables and herbs. There were also two barns for storing grain (for the livestock) and malt (for brewing beer and producing yeast for bread), as well as stables. The Great Garden is now a huge lawn surrounded by well-tended flower beds.

On the lawn opposite the borders are bronze statues by the American sculptor, Greg Wyatt, representing a selection of Shakespeare’s plays, and a collection of ancient mulberry trees – the oldest thought to be a cutting from Shakespeare’s original tree. Each sculpture interprets one of Shakespeare’s plays – The Tempest, Hamlet, King Lear, Julius Caesar, A Midsummer Night’s Dream, Macbeth and The Winter’s Tale,  and the characters Henry IV and Falstaff. They all have an organic tree-like quality that’s beautifully in keeping with their garden setting. 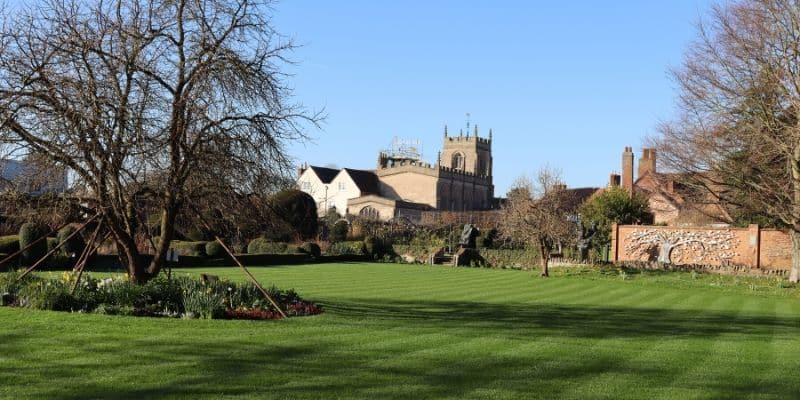 The large lawn of the Great Garden at New Place, looking back to where the house once stood

The Birthplace Trust, in its recent renovations, wisely decided that the best way to preserve, or recreate, the spirit of Shakespeare was to keep New Place – a vacant lot where there had once been a succession of houses and a garden –  natural: that was the driving principle. They were paying tribute to the love Shakespeare had of gardens, flowers and plants, which is so clearly affirmed in his poetry. After the noise and filth of London, with its foul air, he chose to return to the peace and quiet, the freshness and beauty of his roots. He lived there in retirement for several years, living in comfort and surrounded by natural beauty.

Modern Stratford is a very busy town – ironically, because of Shakespeare, the man who so appreciated its regenerative qualities having, by his fame, made it a place of pilgrimage, attracting tourists from all around the world. In the midst of that hubbub – the crowded streets and overflowing restaurants –  the lawns, flower beds, trees and birdsong of New Place, and the nearby River Avon, provide a real haven.

You may well be wondering why Shakespeare’s New Place now longer exists… this takes some explaining, as the history of the house is somewhat complex, and the story of subsequent owner Rev. Francis Gastrell, a fascinating one.

The original house was built in the 1400s, and bought by Shakespeare from the Clopton family. On his death, Shakespeare’s daughter inherited the house and she and her husband, Dr. John Hall, moved in, and in turn, left it to their daughter, Elizabeth. She died childless and the house was sold back to the Cloptons at the end of the 17th century. The Cloptons demolished the house and built a splendid modern house on the site in 1702. 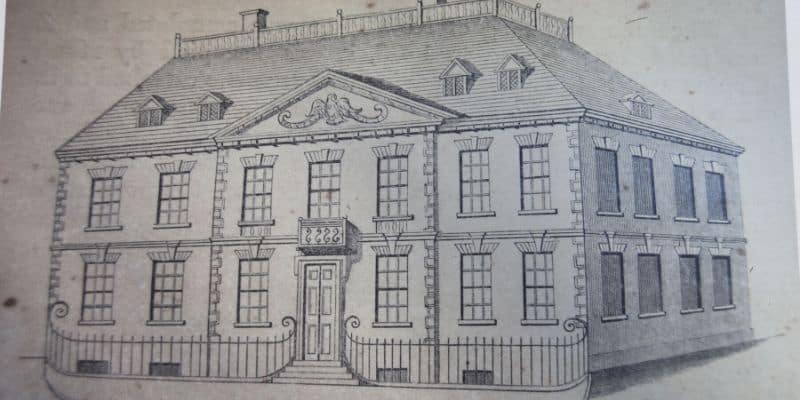 This new property was later acquired by the Reverend Francis Gastrell, by which time the Shakespeare tourism industry was taking off. Although the house had been knocked down and rebuilt, the garden contained a large mulberry tree that William Shakespeare himself planted, and Gastrell regularly found people trampling his garden to take cuttings, branches and bark from the tree. He constructed a fence and padlocked the gates but people broke in, leading him to eventually chop down the mulberry tree and sell it to a local watchmaker who promptly carved souvenirs from it. That inspired tourists to seek out the spot where the tree had been, and Gastrell, unable to do anything about it, decamped from Stratford.

He allowed his servants to stay on, however, which incurred the ‘poor rate tax,’ levied on homes occupied by other than the immediate family of the owner. Gastrell refused to pay it, but the Council insisted on receiving payment, until one day in 1759 the Bailiff’s men arrived to collect the tax or take Gastrell off to prison. Gastrell chased them off with his gun, and the next day expelled the servants and engaged workers to demolish the house. They did this, leaving only a pile of rubble and no trace of its owner. In 1876 the vacant plot was purchased by the Shakespeare Birthplace Trust.

Visits take around an hour, though there’s no need to rush it, and the gardens provide a great environment to relax for a while and soak up the ambiance of the place.

Have you visited New Place and have any advice or suggestions? Let us know in the comments section below!

In 1927 a young man who was later to become famous visited Stratford and wrote enthusiastically about it in an essay, Seeing Stratford. J. B. Priestly became a prolific writer and wrote the enduring novel, The Good Companions.

In his essay he wrote: And there was one moment, the other afternoon, when I really did feel I was treading upon his own ground. It was when we were in the gardens of New Place, very brave in the spring sunlight. You could have played the outdoor scene of Twelfth Night in them without disturbing a leaf… The little Knott Garden alone was worth the journey and nearer to Shakespeare than all the documents and chairs and monuments…I remember that when we left that garden to see the place where Shakespeare was buried, it didn’t seem to matter much. Why should it when we had just seen the place where he was still alive?