You are here: Home1 / Stratford Upon Avon Things To Do2 / Shakespeare Birthday Celebrations

Each year, on the weekend closest to St. George’s Day and Shakespeare’s birthday (both on 23rd April), Stratford upon Avon hosts the two-day Shakespeare Birthday Celebrations. The event brings together performers, artists, and thousands of visitors from around the world in a vibrant celebration of the life and works of William Shakespeare on the streets of his hometown.

Street entertainment features prominently in the celebrations, with pop up and scheduled drama, music and pageantry appearing all over town. As well as street theatre other unique events over the course of the weekend include the Birthday Lecture, the Birthday Lunch, the ceremony of unfurling the flags of nations, the annual Shakespeare service at Holy Trinity Church and the National Living Statue Championship. Think dozens of costumed and painted characters of all eras and types dotted around the streets – from various takes on Shakespeare characters to animals, aliens and everything in between.

The slow procession through the streets is led by the students of Stratford’s King Edward VI Grammar School – the very same school where Shakespeare was educated as a boy. Following in the procession each year are a whole host of groups and individuals, including children from other local schools, members of the Royal Shakespeare Company, the Shakespeare Morris Men, the Band of the Corps of Royal Engineers, the Coventry Corps of Drums, and various ambassadors and distinguished guests from around the world. 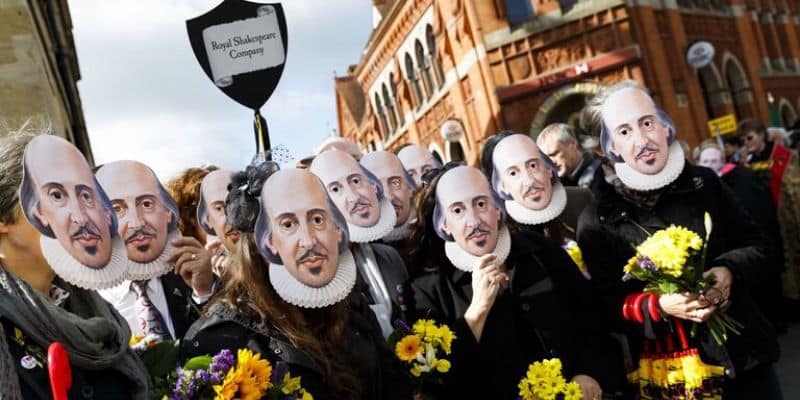 Members of the procession wear rosemary for remembrance and carry yellow flowers and wreaths, which are laid on Shakespeare’s grave in the Holy Trinity Church to the ringing of the bells and music from the organ. The following day, many of the procession re-assemble in the church for the annual Shakespeare service to remember the Bard, and to give thanks to God for his life and work.

There’s something very special about joining the crowds to enjoying the work of William Shakespeare in his physical and spiritual home. Watch TRT World’s take on the Shakespeare Celebrations here:

A one thousand seat temporary wooden amphitheatre was built in the town in Bancroft Gardens on the banks of the river for various acting companies to perform. Canons lined the River Avon to mark the start of the event which also included a pageant, fireworks, horse racing, and a huge feast. Sadly, after a strong start the event was washed out due to non-stop torrential rain, but not before helping to spread the name of Shakespeare far and wide across the country.

The next mass scale Shakespeare commemoration we’re aware of was in 1824 when The Shakespeare Club held a celebratory procession through Stratford, followed by a dinner, planting the seed for the procession at today’s Shakespeare’s Birthday Celebrations. Since 1824 the Shakespeare industry has evolved, making Stratford upon Avon a major stop on the UK tourist trail with an estimated 10 million tourists visiting the town each year. Celebrating Shakespeare’s Birthday is now firmly embedded in Stratford heritage, a fixed date in the town’s calendar each year, and one very much worth attending.

For more information on the most recent and upcoming Shakespeare Birthday Celebrations visit the official website: https://www.shakespearescelebrations.com/

Have you been to the Shakespeare Birthday Celebrations and have any tips? Please let us know in the comments section below!