Shakespeare’s Birthplace (Stratord upon Avon) is a restored 16th-century half-timbered house situated in the pedestrianised Henley Street in the centre of town. John Shakespeare lived and worked in this house for fifty years. When he married Mary Arden she came to live with him here, where they had eight children, though only five survived past childhood.

The property was originally three separate houses, with John Shakespeare buying all three properties over time, and knocking them into what became the largest house on Henley Street. It’s believed that William Shakespeare was born in his parents’ bedroom in 1564 and lived in the house until he moved to London with his brother Edmond when he was 23. This would have included living in the house for the first five years of his married life with Anne Hathaway. 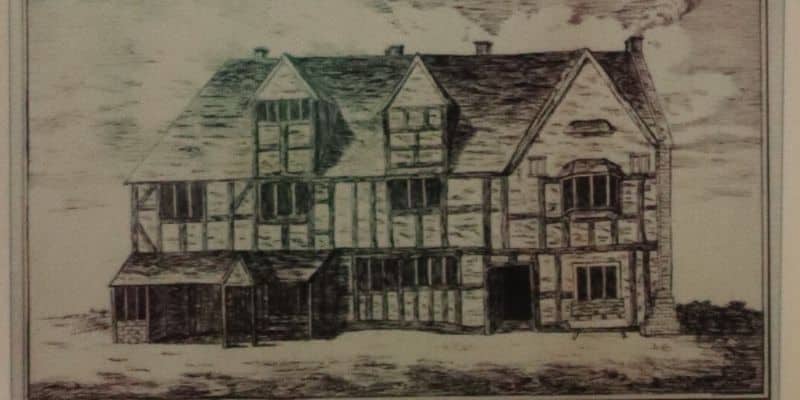 The earliest known illustration of the Shakespeare Birthplace, by Richard Greene showing the Tudor building with windows set into the roof, a gable and porch.

Set in large, beautifully maintained gardens, the house is accessed through a separate modern building that functions as a ticket office and exhibition space. The permanent Shakespeare exhibition has a mix of Shakespeare era items – including a beautifully preserved second folio – on display, as well as a large interactive video feature showing Shakespeare’s relevance to today.

The design of the house followed a traditional Tudor plan – on the ground floor was a parlour and adjoining central hall, separated from a workshop area by a short passage. Above this were three bedrooms with an attic space above. It’s likely there was a separate kitchen and brewhouse for brewing ale, as well as additional outhouse space used by John Shakespeare for his glove and wool businesses, none of which survive today.

The parlour was an intimate space for the Shakespeare family to gather and talk in the evenings, and entertain any guests. This would have been the grandest room in the house, used to showcase the family’s social status and provide hospitality to their guests. To this end the family’s ‘best bed’ was kept in this room – an item of furniture used both as an occasional guest bed that would have ost around £30,000 in today’s money! 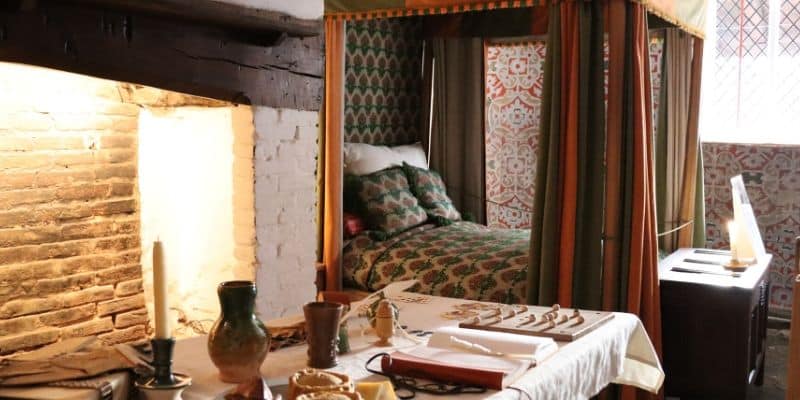 The parlour at Shakespeare’s Birthplace, including the best bed in the house for occasional guest use.

The Shakespeare family would have enjoyed their main meal here in the hall each day at around 11am (including William, who would have walked home for lunch from his school five minutes away). In Tudor England detailed ‘sumptuary laws’ described what each class could wear, and eat for each type of meal. As a middle-class family, the Shakespeare’s would have been allowed two courses for each main meal, both consisting of several shared dishes including bread, pies, pottage (a thick stew), fish and meat – except on Fridays, Saturdays and Wednesdays which were classified as ‘fasting’ or ‘fish’ days, with no meat allowed. 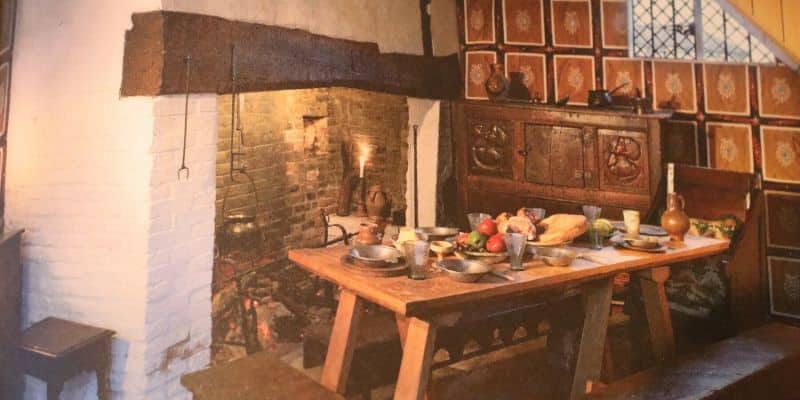 The hall (eating room) of Shakespeare’s Birthplace, complete with replica table and benches

John Shakespeare made gloves in this ground floor workshop and sold them from the window ledge on to the busy Henley Street. John was also a ‘whittawer’, making his own leather from the skins of deer, horses, goats and sheep. When John bought this part of the building in 1575 it was known as the ‘Woolshop’, and John continued this tradition, becoming an illegal dealer in wool, alongside his legitimate glove business

John Shakespeare’s glove workshop at the Shakespeare Birthplace, complete with the window where he displayed and sold his gloves to passersby.

Walking up the stairs there are three bedrooms:

There were two bedrooms for the children – one for the boys and one for the girls. From the age of five William shared a bedroom with his younger brothers Gilbert and Richard. Whilst the room is light, and of a decent size, it contained only one bed that the three boys shared from five years old until they got married. In Tudor times there was much suspicion around demons and spirits, leading the children to sleep sitting upright.

Next door to the boys room, and above the workshop was a similar set up for the girls bedroom, though for most of her childhood Joan Shakespeare was the sole occupant of this bedroom as her two elder sisters before she was born, and her younger sister died at eight years old, having spent her first five years sleeping in their parents bedroom.

A couple of surprising facts the guides in the house tell you are that:
• Fires weren’t allowed in Stratford after 8pm, due to the risk of fire damaging the wooden frames, thatched-roofed houses.
• Although the house has windows today in what looks like authentic glazing, glass was only put into the windows around 1670, after Shakespeare’s time. Until then the house simply had wooden shutters over the windows.

Both of these facts would explain why it was common for lots of family members to sleep in the same bed – primarily to stay warm! 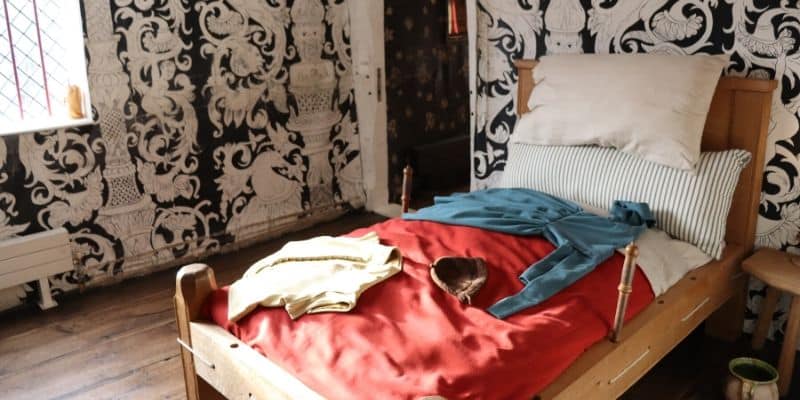 Shakespeare’s bedroom at Henley street, containing a replica bed he shared with his two younger brothers.

This is the room it’s believed William Shakespeare was born, in his parent’s bed. Shakespeare would have shared this bedroom with his parents until he was five years old (as was common in Tudor times), sleeping first swaddled in a cradle, then as he grew bigger sleeping in a pull out ‘truckle’ bed made of wood and rope. As with all other rooms in Shakespeare’s Birthplace his parents’ bedroom is decorated with a mix of replica and original Tudor furniture to recreate the feel of the house in Shakespeare’s time. 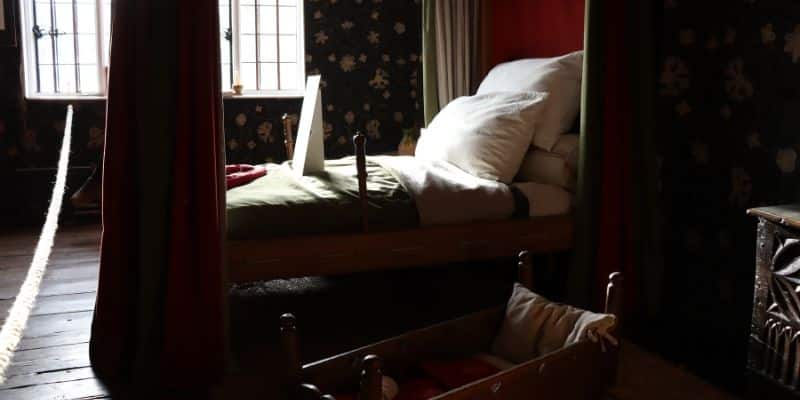 Shakespeare’s parent’s bedroom at the Henley Street House, where Shakespeare was born.

Above the bedrooms was an attic space which it’s thought was used by John to store his illegal wool – and also a couple of apprentices to his glove-making business who stayed with the family for seven years until their apprenticeship was complete.

John Shakespeare died in 1601 and as the eldest surviving child, William inherited the house at the age of 37. Shakespeare already owned the sizable New Place, so he annexed the left-hand portion of the property as a small dwelling for his sister Joan Hart and her family, and leased the remained of the building to Lewis Hiccox who extended it as an inn called the Maidenhead (and later the Swan and Maidenhead). The extension was a rear wing added to the property to create a drinking parlour, cellar and a number of rooms with simple straw mattresses and wooden bedsteads providing travellers a place to sleep.

The inn remained until 1847. When William Shakespeare died he left the house to his eldest daughter Susanna, who in turn left it to her only child, Elizabeth. Although she married twice Elizabeth had no children, so when she died the house was passed to a descendant of Shakespeare’s sister Joan Hart. The Shakespeare Birthplace Trust bought the property from the Hart family in 1847 and has maintained the property since then.

The property has very engaging guides dotted around the house who tell tales of Shakespeare’s life, and enjoy chatting about all aspects of Shakespeare – if the crowds allow.

Look out for costumed actors in the garden, bringing Shakespeare’s works to life with speech and song – you can even make requests or join in.

Visits take around an hour, though there’s no need to rush it, and the gardens and wandering actors provide a great environment to relax for a while and soak up the ambiance of the place. 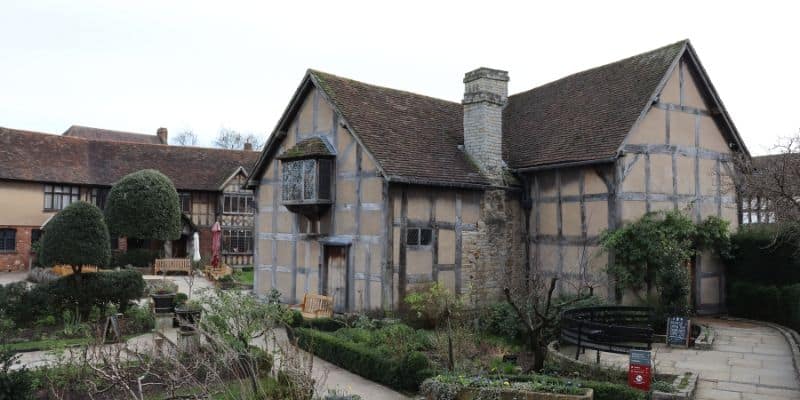 Rear of the Shakespeare Birthplace building on Henley Street

Have you been to the Shakespeare Birthplace and have any tips for other visitors? If so, please let us know in the comments section below!