Discover all of Stratford’s theatres. As Shakespeare’s birthplace, Stratford-upon-Avon theatres offer some of the UK’s premier performances, with a disproportionate number of theatres to choose from featuring a range of both Shakespeare and non-Shakespeare repertory.

Stratford is, of course, the home of the Royal Shakespeare Company, which alone has three permanent theatres in the town – The Royal Shakespeare Theatre, The Swan Theatre, and The Other Place, plus the seasonal pop-up outdoor Dell Theatre. Add to this a number of independent Stratford theatres dotted around the town and there’s no excuse for any trip to the town to not include a play (or two!).

Below we list all of the theatres in Stratford, along with a brief overview, contact details, and website. At the bottom of the page you’ll find a map showing the location of each of the Stratford theatres.

The Shakespeare Memorial Theatre was built in 1879 on the banks of the River Avon. After a tragic fire in 1926 Elizabeth Scott won a competition to become the first female theatre architect anywhere in the world, designing a striking art deco replacement, which opened in 1932 as a 1,000 seat theatre. This replacement theatre was transformed over a three-year period from a theatre with a traditional victorian proscenium arch stage, to a theatre space containing a thrust stage of the type used in Shakespeare’s time, and reopened in 2010 as the Royal Shakespeare Theatre.  Also included in the redevelopment were new facilities including a large bar in the old ticket office, exhibition spaces, rooftop bar and restaurant an impressive auditorium and 36-meter viewing tower giving views over Stratford and the surrounding countryside.

The building now houses both the Royal Shakespeare Theatre and the Swan Theatre, which share the same box office and all other facilities, though have different auditoriums, backstage areas and entrances.

Front of house and back of house doors are available multiple times a day, depending on the season, and what plays are on any given day. They’re well worth the house spent, with some great insight inot the history of the theatres, and plenty of anecdotes about the many great and good who’ve trod the boards here (for example, did you know that in the event of the Houses of Parliament being damaged during the second world war, Churchill planned to relocate here?).
Tours are available

Take a virtual tour of the Royal Shakespeare Theatre 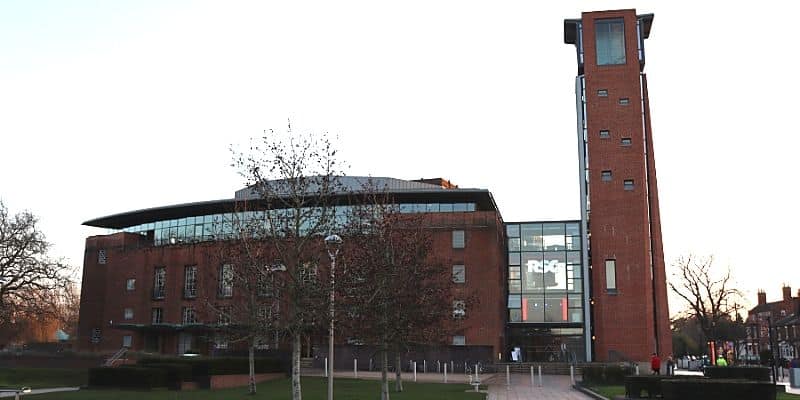 The Swan Theatre opened in 1986 in the same building as the Royal Shakespeare Theatre on the Avon riverfront. The auditorium itself is a more intimate space than the Royal Shakespeare Theatre, with 426 seats (and 32 standing spaces) set around a deep thrust stage, making it a firm favourite with directors, actors and audiences, and regarded as one of the finest spaces in the world for actors to ply their trade. The repertoire of The Swan Theatre tends to be focussed as much on Shakespeare’s contemporaries as on Shakespeare himself, as well as plays written by more modern and contemporary playwrights.

Take a virtual tour of the Swan Theatre 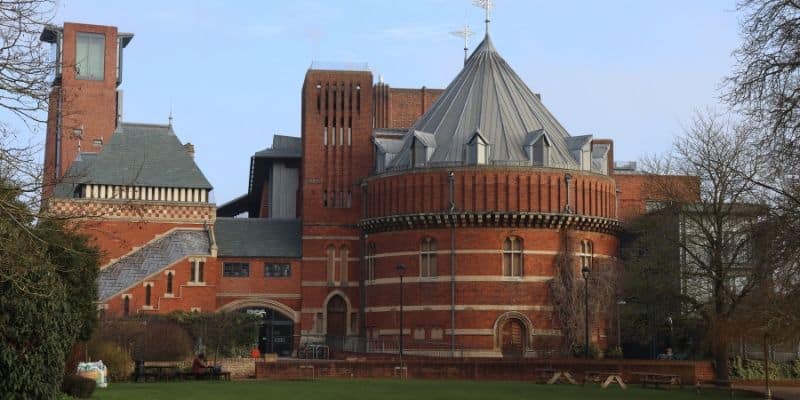 Exterior of the Swan Theatre, Stratford Upon Avon

The third of the three Royal Shakespeare Company theatres in Stratford, The Other Place began life as a tin shed rehearsal room, which was converted into a studio space in 1974. After undergoing a series of changes through the 1980s and 90s (including a spell as The Courtyard Theatre) the space evolved into its current incarnation as a combined space for learning, research and rehearsal, with a 200-seat studio theatre. There is a café on-site for refreshments, which also hosts popup performances from time to time.

The space is used to showcase new plays and writers, and also offers music, poetry and family events – most Thursday evenings there’s a free music or spoken word event. Some fun stuff includes a costume hire store, tours of the theatre (including the props and costumes) 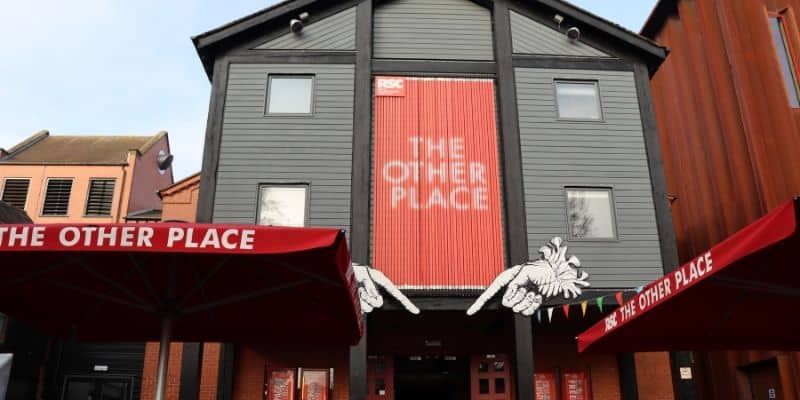 The Other Place theatre, Stratford Upon Avon

Stratford’s outdoor theatre The Dell was launched in 2006 to host productions of hundreds of amateur and semi-professional theatre companies, community groups, schools, and universities. The theatre runs in the summer season only, with performances each weekend through July and August. The setting of the theatre is in the park on the banks of the River Avon between Holy Trinity Church and the Royal Shakespeare Theatre. 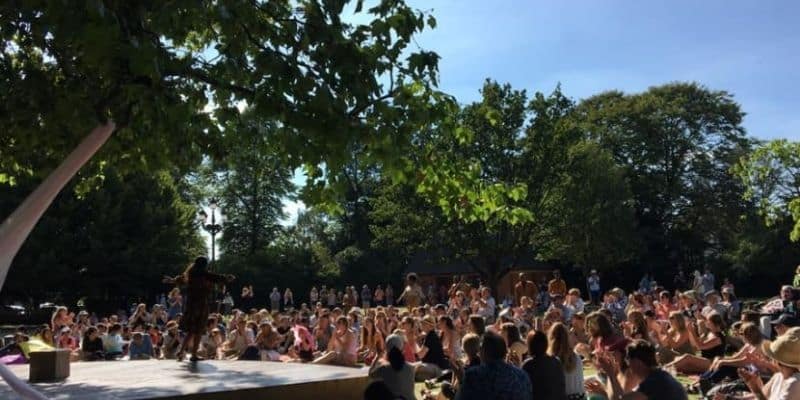 Other Theatres in Stratford Upon Avon

Stratford Playhouse is a modern multi-purpose venue in central Stratford-upon-Avon, which offers a wide range of artistic and cultural activities. The venue includes an impressive atrium leading to a unique curved theatre seating system, along with a courtyard garden and meeting rooms available for hire. Performances at the Playhouse are varied and include comedy, classical concerts, literary events and family shows, meaning there’s plenty to suit all tastes. 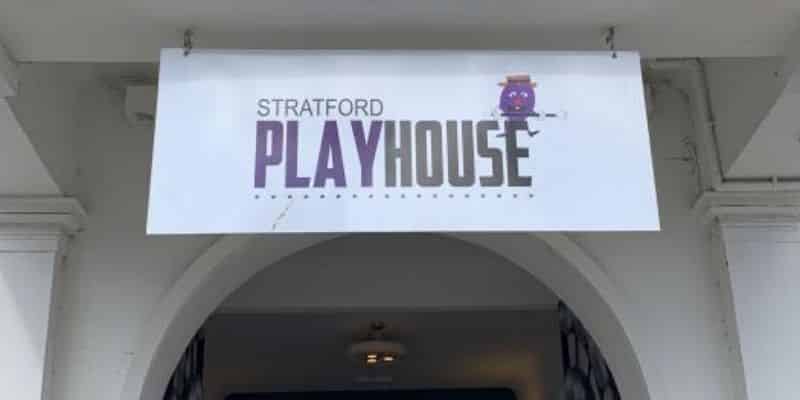 The Bear Pit theatre was founded in 2008 to advance public education in the arts. Run by a voluntary United Reformed Church organisation, the venue is a super-intimate 100 seat ‘little theatre’. 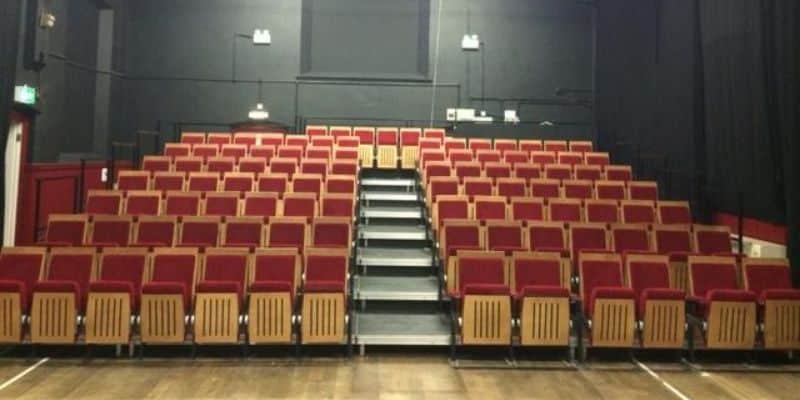 The Attic Theatre was established in 2009 by the Tread the Boards theatre company, using a space in a 15th century listed building on the banks of the River Avon. The theatre seats just 89 people, making for very up close and personal performances. 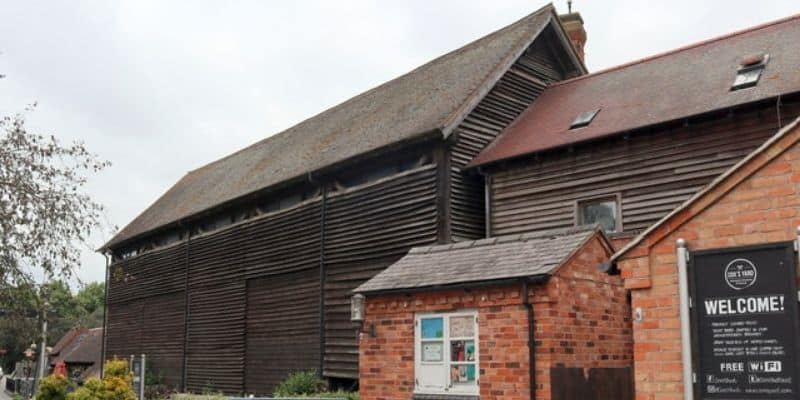 Exterior of The Attic theatre, Stratford Upon Avon