The Taming of the Shrew Play: Info, Summary & Resources

You are here: Home1 / The Taming of the Shrew Play: Info, Summary & Resources

Quick The Taming of the Shrew Info

The Taming of the Shrew is a play within a play by Shakespeare. It’s a story told by a man, Sly, in an alehouse in England, and his story is set in Padua, Italy – in a public square, in Baptista’s house, and in Lucentio’s house. Other scenes take place in Petruchio’s country house and on the road between there and Lucentio’s house. Read more about The Taming Of The Shrew settings.

Genre classification: The  Taming of the Shrew is a comedy play.

Main characters in The Taming of the Shrew: The action revolves around Katherine (Kate), the daughter of Baptista and the older sister of Bianca. Katherine has no suitors because she is not conventionally attractive but more seriously, she is notoriously shrewish, and seems to hate men, which makes it difficult for any man to deal with her. Bianca is sweet natured and beautiful but can’t marry until her older sister does.

Petruchio is a gentleman from Verona who agrees to marry Katherine because of her large dowry. The action is mainly concerned with his efforts to tame her.

Lucentio, a young man from Pisa, falls in love with Bianca and because she can’t marry, they elope.

See all characters in The Taming of the Shrew

The Taming of the Shrew Summary

Here is a brief plot summary of The Taming of the Shrew:

A wealthy Padua merchant, Baptista, has two daughters. One day Lucentio, a student, comes to Padua, sees Bianca, the younger sister, and falls madly in love with her. He has heard, though, that Baptista will not allow Bianca to be married before her older sister, Katherina, a very forceful character who has a scornful attitude to men and expresses that without restraint. The situation regarding Bianca is very complicated and Lucentio’s entry into the equation makes things even more complicated. Two local men, Hortensio and the elderly Gremio, are pursuing Bianca but she doesn’t like either of them so they have to resort to a range of tactics to try and further their interest. Gremio hires Lucentio, disguised as a Latin tutor, to woo Bianca on his behalf. Hortensio poses as a musician to try and get into her company.

While all this is going on Petruchio, a young friend of Hortensio from Verona, pays a visit to his friend and hears the story about the feisty Kate. He sees her as a challenge, which he decides to rise to. Baptista welcomes this as he is fed up with Kate’s disruptive behaviour, that makes family life difficult. He accepts Petruchio’s offer of marriage and although Kate opposes it, she cannot do anything about a father’s right to marry his daughter off. Petruchio arrives at the church outlandishly dressed and whisks her off to Verona as soon as the marriage is pronounced. During the journey, Kate rebels against her husband but he begins training her to obey him. On arrival at his house, Petruchio mistreats her and instructs his servants to do the same. She is denied everything she wants for a civilised life, including food and sleep. She is not allowed new clothes or any luxury. That wears her resistance down and eventually, she submits and becomes an obedient wife.

It is time to visit her father where Petruchio plans to demonstrate his wife’s obedience.

In the meantime Hortensio has given up on Bianca and married a widow. Lucentio and Bianca, having fallen in love, have run off and married secretly. They return now, while Petruchio and Kate are visiting and Baptista, relieved that it’s all turned out better than he had thought it would, hosts a party for his daughters. They all have a good time and as the men gather together after the meal Petruchio challenges Lucentio and Hortensio to a competition to see which of their wives is the most obedient. Each one is to command his wife to come to him. Bianco and the widow fail to respond whereas Kate does and, furthermore, delivers a lecture to the other wives on the duties of a wife.

The Taming of the Shrew Themes

This is an interesting play in that Shakespeare explores the relationship between men and women intensely – more so than in any other play. The way women are treated and the effects of that is the main theme of the play. Baptista has complete domination over his daughters and dictates to them on every matter. Katherine is ‘tamed’ by her husband as though she were a wild animal. Men and women are rude and cruel to each other. Even Bianca, the sweet sister, at one point calls her husband a fool. Petruchio is alarmingly cruel to Katherine. It’s funny, but Shakespeare is making a serious point.

Money and the greed for it, is another major theme. Dowries and their size, and how much women are worth features strongly.

As usual in Shakespeare, the theme of appearance and reality is strongly expressed. Nothing is what it seems to be. Even the shrewishness of Katherine conceals a compliable nature: her shrewishness is a reaction to the hurt she feels at the treatment she has received from men. The action is largely driven by people disguised to conceal their identities and achieve their goals, which are not always what they seem to be. 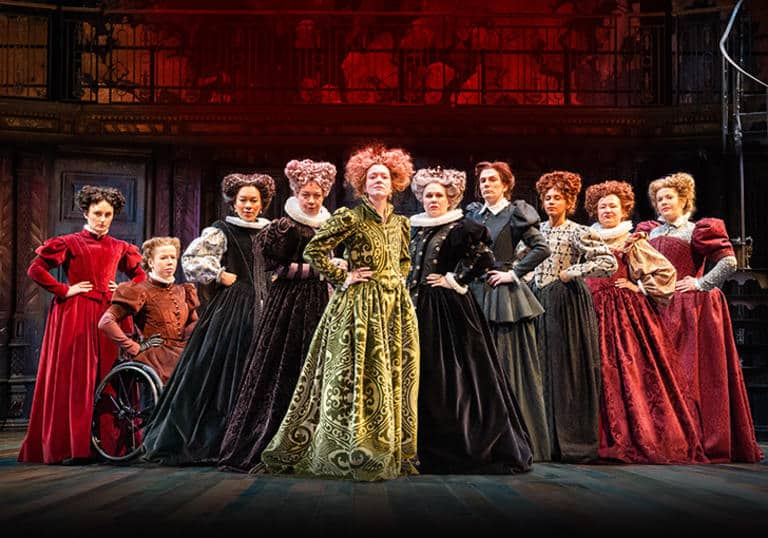 The Taming of the Shrew cast on stage at the Barbican