You are here: Home1 / Shakespeare Websites Directory – The Best Of The Rest2 / Shmoop: Review & Analysis

Shmoop is a Yiddish term that means “to move something forward a bit.” In Schmoop’s case, they like to think they’re moving education forwards.

What Do Shmoop Offer?

Shmoop offer a whole bunch of homework help and study guides, across subjects as wide apart as maths, literature, art, and science. Much of their content is free, whilst they also offer a monthly subscription to students which gives access to 400 online courses, 10,000 videos along with other educational support. The subscription also allows members to view the site free of ads, which is a bonus! 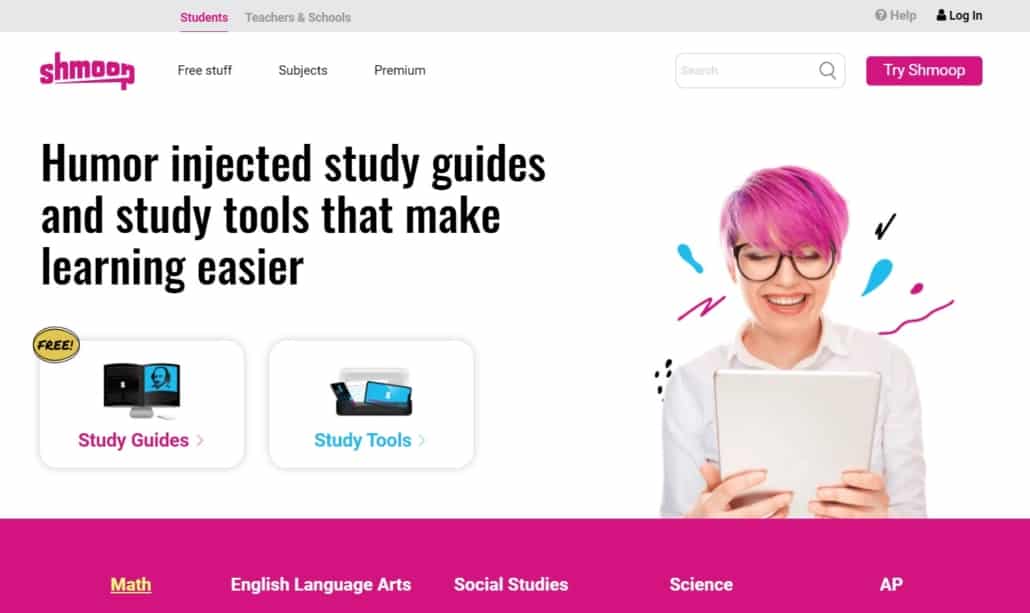 This core offering is supplemented by plenty of other Shakespeare-related articles, including:

Shmoop is certainly one of the biggest players in the online education space – both in their literature offering and the many other subjects they cover.

Their website currently receives around 5 million visits each month, with website users spending close to 4 minutes on average reading around 2 pages each visit.

Over two-thirds of their users come from North America, with other English-speaking countries such as Australia, Canada, the United Kingdom, and India making up the bulk of the remaining users. 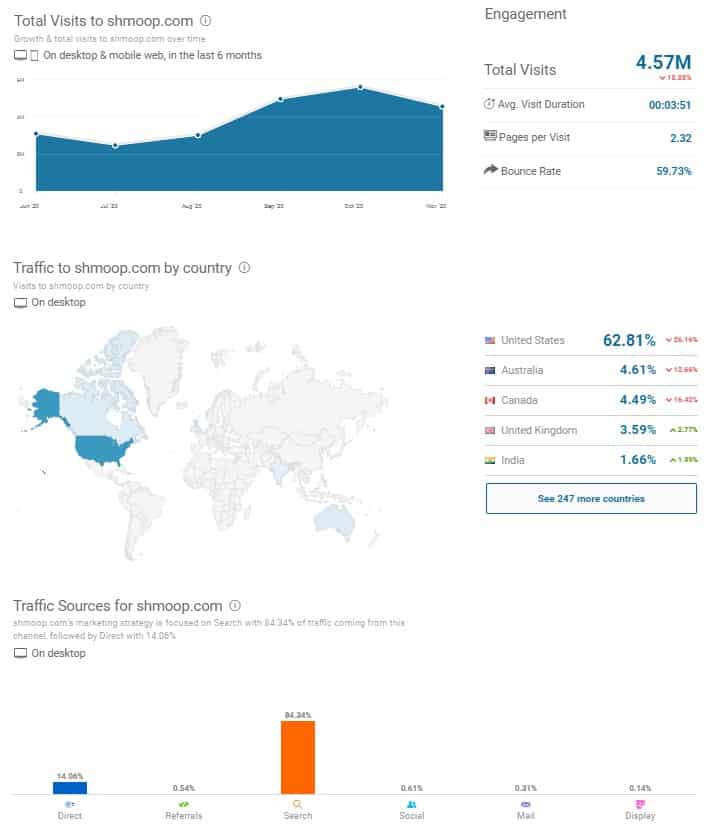 Shmoop In Their Own Words

Our mission is to help everyone understand Shakespeare’s language.

Much like No Fear Shakespeare, we offer a broad range of Shakespeare resources. Our free resources cover everything from play and sonnet translations to in-depth looks at characters, play summaries, themes, settings, and significant and famous Shakespeare quotes from all of his works

We also have lots of general information about Shakespeare’s life, family, homes in London and Stratford, theatres, and use of language. Plus we have a Shakespeare blog that covers some of the fun and modern-day takes on the Bard of Avon.

And last, but certainly not least, we offer a range of NoSweatShakespeare ebooks. These stem from a realisation that although so much good work has been done on textual aspects and the broad grasp of plot, few resources are available to give students a complete grasp of the complexity of a whole Shakespeare text in one short reading. (See samples of Shakespeare’s plays as modern English ebooks.)

That’s our review done of what Shmoop has to offer the online Shakespeare ecosystem. What are your thoughts – have you used them before and have an opinion?

We’d love to hear from you. Please do join in with the comments section below!