“Exit, Pursued By A Bear”

You are here: Home1 / Welcome To The No Sweat Shakespeare Blog!2 / Random Fun Stuff3 / “Exit, Pursued By A Bear”

‘Exit, Pursued By A Bear’ is generally considered to be the most famous of Shakespeare’s stage directions – leading up to the off stage death of Antigonus in The Winter’s Tale.

And so Dr Who and BroadChurch star David Tennant’s days with the Royal Shakespeare Company came very in useful when he was asked to talk for 60 seconds without hesitation, repetition or deviation on the topic, ‘Exit, pursued by a bear’, for the Radio 4 program Just A Minute.

In fact, David Tennant managed the feat on his first outing, becoming the most successful debut in the show’s 50 year run. Calling Shakespeare’s direction  ‘the most famous direction in theatrical history’, he spoke at length with some considerable understanding of Shakespeare’s staging of plays. Listen to it here: https://www.bbc.co.uk/sounds/play/p02jmd8z

For performances at the Globe in Shakespeare’s time it’s not known whether Shakespeare used a real bear from the London bear-pits, or an actor in bear costume. The mystery remains, but we do know that, 400 years after Shakespeare wrote The Winter’s Tale and the stage direction ‘exit, pursued by a bear’, the line is still providing entertainment! 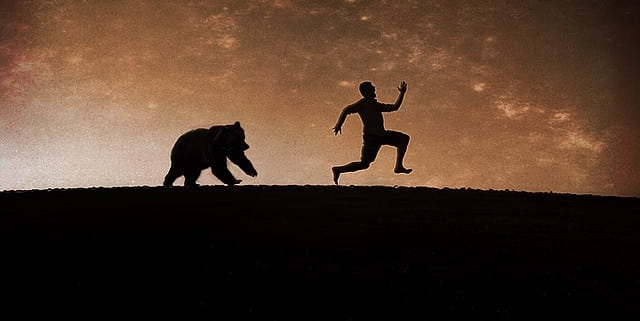 Exit, pursued by a bear!