Shakespeare’s family was not large by standards of the time. Shakespeare’s sister, Joan, was his only sibling to survive him. She was five years younger than him and much loved by him. Shakespeare died a rich man and he left her well provided for in his will with both property and money. He also made sure that her sons would be comfortable.

Born in 1569, Joan was named after John and Mary Shakespeare’s firstborn child, Joan, born in 1558 but dying, sadly, after only two months. The second Joan lived to be seventy-seven, dying in 1646, thirty years after her famous brother. For those times it was a very long life. Her descendants, with the surname, Hart, lived in Stratford until 1806. The Bard and his sister were very close and one of her sons, William Hart, followed in his uncle’s footsteps, went to London and became an actor with the renowned King’s Men acting company.

There was a third sister, also unknown to Shakespeare. Shakespeare’s sister, Margaret, was born in 1562. she lived for one year, probably dying of the Black Death.

The fourth of Shakespeare’s sisters was Anne, who was born in 1571 when the Bard was seven years old. What a sorrow it must have been for the teenaged William when she died from the Black Death aged eight. We know that in spite of the family’s severe financial problems at that time she was given a very expensive funeral.

Families at that time were large. It was important to have as many children as possible because the child mortality rate was high. The Shakespeare boys all survived. Richard died in 1613, aged 38, and Gilbert in 1612, aged 46, and William in 1616 aged 52.

Joan lived on to see her brother become even more famous than he had been in his lifetime.

Did Shakespeare have a sister?

Shakespeare had two sisters, both younger than himself. Joan was born in 1569 and Anne in Their parents, John and Mary Shakespeare, also had two daughters before William was born, both dying in infancy. Shakespeare also had three younger brothers – Gilbert, Richard, and Edmund. Joan was the only sibling to outlive William. Anne died at the age of 8.

Did William Shakespeare have children?

William and Anne Shakespeare had three children – two daughters and a son. Susanna was born in 1583 and then, in 1585, the couple had twins, Judith and Hamnet. Hamnet died at the age of 11 during the Plague. Susanna married a local physician, Dr. John Hall and Judith married a vintner, Thomas Quinney. 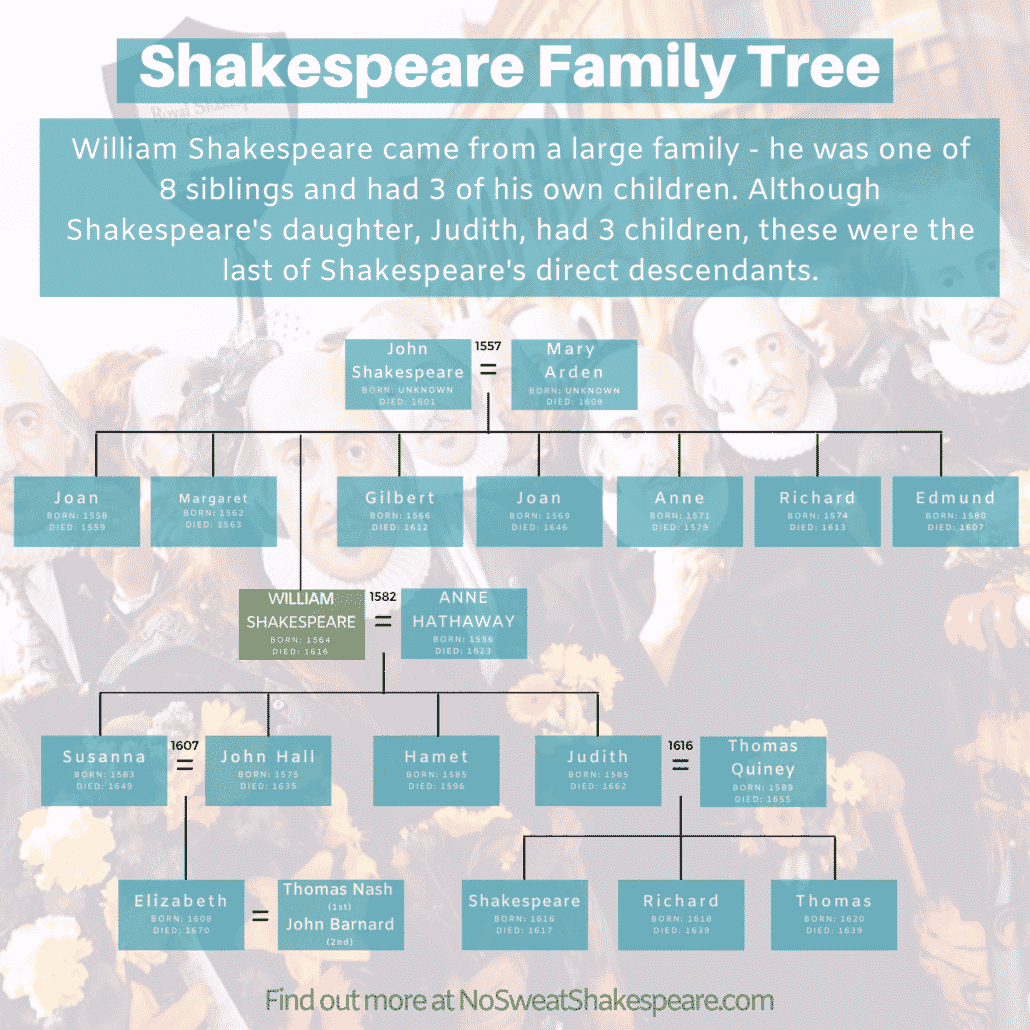