Shakespeare & The Evolution of Christmas

You are here: Home1 / Welcome To The No Sweat Shakespeare Blog!2 / Historic Shakespeare3 / Shakespeare & The Evolution of Christmas

In all of his works, Shakespeare uses the word ‘Christmas’ only three times:

“I see the trick on’t: here was a consent,
Knowing aforehand of our merriment,
To dash it like a Christmas comedy”

Marry, I will; let them play it. Is not a comonty a
Christmas gambold or a tumbling-trick?

The Taming of the Shrew, prologue, act 2

Why is there so little of Christmas in the works of Shakespeare?

Well, the answer is simple, really. The way we celebrate that jolly season is effusive, full, and sumptuous, but the roots of modern Christmas in the 1840s, well after Shakespeare’s time.

Before then Christmas was hardly celebrated – at least not in the way we celebrate it today. Easter was the big Christian festival, a festival of grief followed swiftly by a parallel festival of joy as the Saviour first dies then rises again on the third day. The Bible isn’t clear about the time of Jesus’ birth but it is clear about the season of rebirth: it’s the time when all nature wakes from the death of winter. At least in the northern hemisphere.

Over the centuries the idea of Christmas developed to a point where it became a twelve-day festival, starting on Christmas day, moving on to the second day of Christmas – St Stephen’s day (Boxing Day) – and culminating on the Twelfth Night.

In Elizabethan England, Twelfth Night was the occasion for theatrical performances at the royal court.  Twelfth Night was also a festival celebrated across England with music, masked balls, misrule, and general revelry. 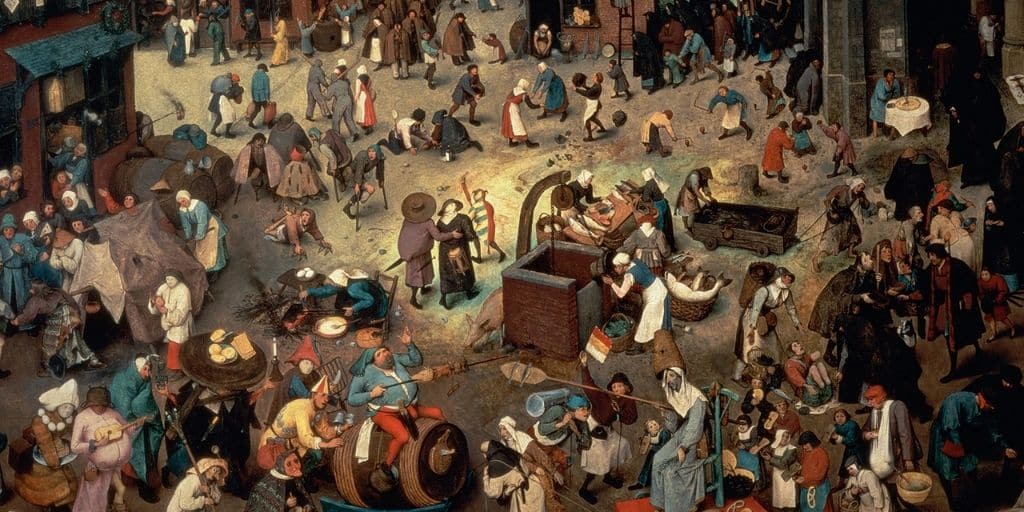 Revelry a the Twelfth Night festival

It’s a matter of convention that Shakespeare wrote his wonderful play, Twelfth Night, for the last night of the Christmas season. It’s a practical, unimaginative title, and has nothing to do with Christmas, referring only to the time for which its performance was intended.

Shakespeare does give us one description of Christmas however, on the frozen battlements of Elsinore in Hamlet:

Some say that ever ‘gainst that season comes
Wherein our Saviour’s birth is celebrated,
The bird of dawning singeth all night long:
And then, they say, no spirit dare stir abroad;
The nights are wholesome; then no planets strike,
No fairy takes, nor witch hath power to charm,
So hallowed and so gracious is the time.

It’s a description of a highly spiritual atmosphere, a ‘hallowed’ time in which everything evil is refused admission. There is nothing of the jollity that we are so familiar with. There are also several descriptions of midwinter scenes in Shakespeare but they aren’t connected with Christmas, although they are the inspiration for Christmas card pictures.

How The Victorians Evolved Christmas

We have to wait for the Victorians with Queen Victoria and particularly her husband, Prince Albert, both Germans, introducing the modern Christmas into England and popularising it. Perhaps the thing Prince Albert is most famous for is the introduction of the decorated Christmas tree, a German tradition that became fashionable in England and established very quickly, leading to the Christmas light shows in London and around the world that we see today.

Charles Dickens’ description of a Christmas dinner in A Christmas Carol clinched Christmas as we know it and set it in our culture for all time. It’s worth a read, to get your juices going for the big day:

Mrs Cratchit made the gravy (ready beforehand in a little saucepan) hissing hot; Master Peter mashed the potatoes with incredible vigour; Miss Belinda sweetened up the apple-sauce; Martha dusted the hot plates; Bob took Tiny Tim beside him in a tiny corner at the table; the two young Cratchits set chairs for everybody, not forgetting themselves, and mounting guard upon their posts, crammed spoons into their mouths, lest they should shriek for goose before their turn came to be helped. At last the dishes were set on, and grace was said. It was succeeded by a breathless pause, as Mrs Cratchit, looking slowly all along the carving-knife, prepared to plunge it in the breast; but when she did, and when the long expected gush of stuffing issued forth, one murmur of delight arose all round the board, and even Tiny Tim, excited by the two young Cratchits, beat on the table with the handle of his knife, and feebly cried Hurrah!

There never was such a goose. Bob said he didn’t believe there ever was such a goose cooked. Its tenderness and flavour, size and cheapness, were the themes of universal admiration. Eked out by apple-sauce and mashed potatoes, it was a sufficient dinner for the whole family; indeed, as Mrs Cratchit said with great delight (surveying one small atom of a bone upon the dish), they hadn’t ate it all at last. Yet every one had had enough, and the youngest Cratchits in particular, were steeped in sage and onion to the eyebrows. But now, the plates being changed by Miss Belinda, Mrs Cratchit left the room alone — too nervous to bear witnesses — to take the pudding up and bring it in.

Suppose it should not be done enough? Suppose it should break in turning out? Suppose somebody should have got over the wall of the back-yard, and stolen it, while they were merry with the goose — a supposition at which the two young Cratchits became livid? All sorts of horrors were supposed.

Hallo! A great deal of steam! The pudding was out of the copper. A smell like a washing-day. That was the cloth. A smell like an eating-house and a pastrycook’s next door to each other, with a laundress’s next door to that. That was the pudding. In half a minute Mrs Cratchit entered — flushed, but smiling proudly — with the pudding, like a speckled cannon-ball, so hard and firm, blazing in half of half-a-quartern of ignited brandy, and bedight with Christmas holly stuck into the top.

Oh, a wonderful pudding! Bob Cratchit said, and calmly too, that he regarded it as the greatest success achieved by Mrs Cratchit since their marriage. Mrs Cratchit said that now the weight was off her mind, she would confess she had had her doubts about the quantity of flour. Everybody had something to say about it, but nobody said or thought it was at all a small pudding for a large family. It would have been flat heresy to do so. Any Cratchit would have blushed to hint at such a thing.

At last the dinner was all done, the cloth was cleared, the hearth swept, and the fire made up. The compound in the jug being tasted, and considered perfect, apples and oranges were put upon the table, and a shovel-full of chestnuts on the fire. Then all the Cratchit family drew round the hearth, in what Bob Cratchit called a circle, meaning half a one; and at Bob Cratchit’s elbow stood the family display of glass. Two tumblers, and a custard-cup without a handle.

These held the hot stuff from the jug, however, as well as golden goblets would have done; and Bob served it out with beaming looks, while the chestnuts on the fire sputtered and cracked noisily.

The Shakespeare family would never have had a Christmas dinner like that! 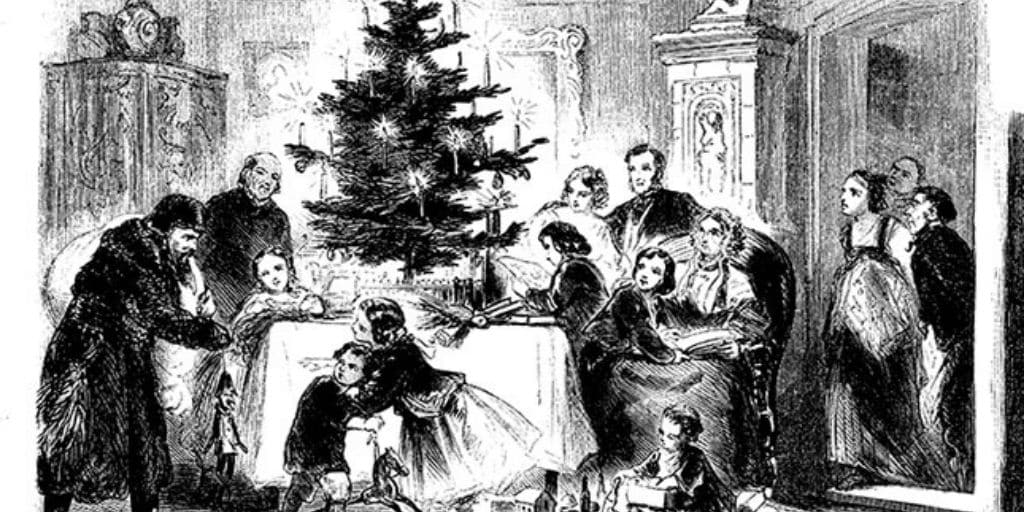