You are here: Home1 / Welcome To The No Sweat Shakespeare Blog!2 / Shakespeare's Works3 / Violence in Macbeth

Macbeth is a prime example of a violent Jacobean drama.

As the Elizabethan age gave way to the Jacobean era new young playwrights emerged. They were very much in tune with their sophisticated London audience, who delighted in the spectacle of sex and violence, so Jacobean plays became increasingly sexual and violent. Not only was there killing and wounding with swords and daggers, poisonings, stranglings, and torture, but also a great number of minor bloodcurdling acts of physical violence. In The Changeling by Middleton and Rowley, for example, De Flores, one of the most villainous psychopaths of the Jacobean stage, stabs a rival, Alonso, three times while his back is turned. He then spies a diamond ring on his victim’s finger. He tries but fails, to remove the ring so he just cuts off the finger and puts it in his pocket before disposing of the body.

Shakespeare wrote most of his plays during the reign of King James. He, of course, had been in tune with his audiences right from the beginning of his career, catering for their interest in history and humour and classical themes during Elizabeth’s reign. And now he was filling his theatres with plays as violent as those of the best of his fellow theatre writers. Cornwall, a  character in King Lear, matches De Flores’ unthinkable act by pulling out Gloucester’s eyes, with the stage direction ‘he plucks out his eyes.’

With all that violence, all those blood-drenched stages, all those dead bodies, the shock value of such things would have been somewhat blunted –  so what would shock a Jacobean audience? Nothing more than the brutal murder of a child on stage, which Shakespeare provides Macbeth.

There is nothing superficial about Shakespeare’s plays, though. Unlike some of his contemporaries, his violent plays were never about violence: when he used violence it was always in the pursuit of greater meaning and the violence was either a device for characterisation, a dramatic device to move the action forward, or something else quite profound. Indeed, he was titillating his audience, pulling them in to fill the seats but, as always with Shakespeare, he had the larger picture in mind.

If the brutal killing of Macduff’s young son is not there simply to satisfy the bloodthirsty taste of the audience then what was it about? We are used to that scene being there but try and imagine an audience seeing it for the first time. What a shock it must have been, given that most members of the audience had little children and the worst thing they would have been able to imagine would have been the murder of one of them. That scene has been familiar for four centuries but it still shocks when we see it on the stage.

The text of Macbeth is infused with blood: Shakespeare uses the word more than forty times. Putting it very simply, the play is about Macbeth’s ambition to be king (read some of the many Macbeth ambition quotes), and having trod a bloody path to realize that he now finds it to have been a hollow and empty enterprise. His attempt to cover up his route to the throne and simply to survive as king involves increasingly desperate acts of violence, and a lot more blood,  as he sets about eliminating his opposition. 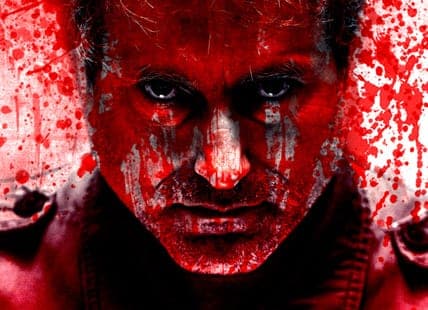 Well, what about the murder of the child?  This is where we see the master dramatist at work. Shakespeare’s plays are always manipulations of the audience’s emotions. At the beginning of Macbeth Shakespeare takes care to show them Macbeth as a great popular hero, loved by the king and respected and honored by the whole of Scotland. Shakespeare builds that in many ways. When Macbeth gets the idea of murdering Duncan and being elected king we follow him down that road as Shakespeare lets us into his mind with several soliloquies. We don’t see anything else. Macbeth is hesitant. He is still a good man, and we are basically on his side as there are no counter-arguments. We also see him as someone who wants to be king but shrinks from the act he has to commit to get there, but he is bullied and manipulated by Lady Macbeth and forced into it.

The point is that Shakespeare wants us to be there with Macbeth and so at this point, we are identifying with him and wanting him to win. When he kills Duncan it’s done offstage, and all we see is the blood on his hands and his sense of the horror of what he has done. It’s not particularly horrifying for the audience as we don’t see the killing: if Shakespeare had presented the assassination onstage we would have responded differently. But now Macbeth, crowned king, begins to be paranoid. Shakespeare moves us away from the inner life of Macbeth and we have scenes where other characters talk about his violent suppression of anyone he regards as a threat. We see the murder of his best friend, Banquo, and we hear of other atrocities. We are beginning to not like Macbeth so much but perhaps we can still sympathize with his position. But then we have a scene with an intelligent and endearing child, the son of Macduff, chatting with his mother, wondering what’s happened to his father, who has fled to England. Macbeth’s hired killers enter and begin their slaughter of Macduff’s family, on the orders of Macbeth, starting with the killing of the child. Directors of productions of the play are able to make that as brutal and bloody as they like.

This scene occurs right in the middle of the play – the apex of a structure that leads up to it, with the audience on Macbeth’s side, and follows it with our horror at what a villain he is, allowing us to rejoice in his defeat – another violent act in which he is beheaded, and his head displayed onstage. Shakespeare has manipulated our response and turned us completely. The scene depicting the brutal killing of a child takes us away from our support for Macbeth, leading us to an appalled sense of horror at his actions.

The scene is central in every way. The scenes immediately adjacent to it reflect each other, and it goes back to the beginning and forwards to the end of the play in that way, the scenes before that scene and after it reflecting each other at every step, all pointing to that supreme act of violence.

Shakespeare has adopted a structure that was used by the great writers of the past – Homer and all the books of the Old and New Testaments – in which the writers place their main point at the centre of the book and lead up to and away from it, everything pointing to that main, central point. And so, to Shakespeare, the murder of a child is the main point in Macbeth. This idea has not been generally explored by Shakespearean scholars but it suggests that Shakespeare may have seen ambition’s toll as far worse than simply the downfall of a single protagonist. But whether a member of an audience understood that or not was not as important in the early 17th century as the enjoyment of a paying audience derived from witnessing such shocking violence.