The Julius Caesar play is set in Rome in 44 BCE. Later scenes are set on various battlefields around Italy. Rome was the centre of the world at the time and controlled a great empire around the Mediterranean. Rome was everything sophisticated and settled, which makes the murder of one of its greatest generals right inside the Capitol by other senators shocking. Rome at the time had a tradition of democracy, which makes an attempt to overthrow that and create a kingdom a significant historical event. Shakespeare reinforces the sense of everything Roman, with senators, tribunes, frequent mentions of monuments, the River Tiber, the forum, the Capitol etc. Read more about Julius Caesar settings.

Genre classification: Julius Caesar is regarded as a Roman Play

Main characters in Julius Caesar:  Julius Caesar is the dictator (chief senator) of Rome. He is assassinated by a group of conspirators, all senators, led by Brutus and Cassius, because he wants to overthrow the democracy and  install himself as Emperor. The other conspirators are Casca, Cinna, Caius Ligarius, Decius Brutus, Metellus Cimber and Trebonius. Caesar’s adopted son, Octavius Caesar and Caesar’s friend, Mark Antony embark on a war against the assassins. They eventually form a trimverate (a group of three leaders of Rome), together with Lepidus.

A witnesses to the assassination is the senator, Publius. Other characters are Artimedorus, a Greek teacher, who tries to give Caesar a letter informing him of the assassination; Cinna the poet, who is killed by the angry mob, who mistake him for the conspirator, Cinna; a Soothsayer, who predicts Caesar’s death; Cicero, a distinguished lawyer, senator and orator; and another senator, Popilius Lena.

Flavius and Marullus are tribunes (policemen) who are put to death for removing banners from staues of Caesar. Lucius, Varro and Claudius are Brutus’ servants. Dardanius, Clitus and Strato are Brutus’ slaves and Pindarus is Cassius’ slave. See a full list of characters in Julius Caesar.

Julius Caesar themes: the main theme is power and the abuse of it. This is shown in three main ways: Caesar’s ambition and hunger for power, striving to make himself Emperor; Cassius’ yearning to overthrow Caesar and make himself even more powerful than the man he regards as inferior to himself; Mark Antony’s and Octavius Caesar’s own eagerness to take advantage of the power vacuum in Rome and make themselves emperors, which they succeed in doing.

Other themes are friendship and how it fares under stress; honour, loyalty and the evils of pride; and various political considerations. 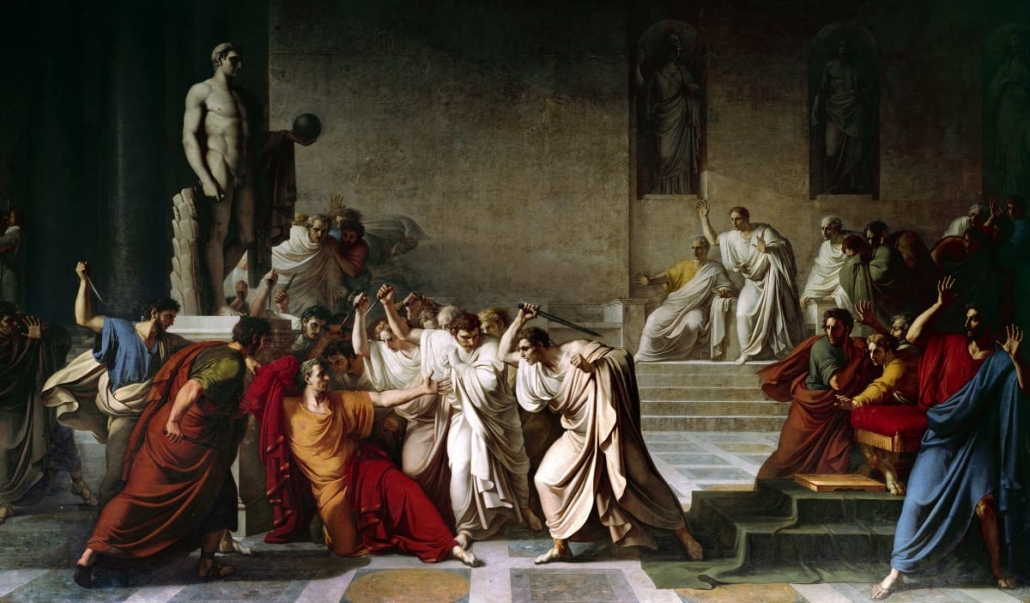 Caesar is set upon by senators on the ides of March, a key scene in the Julius Caesar play