Act 2, scene 2 of Romeo and Juliet – often referred to as the Romeo and Juliet balcony scene – is a central moment in Shakespeare’s play, and one that has become a global cultural reference through the hundreds of years since it was written.

Juliet’s balcony is now one of the favourite cultural images that form in the minds of the more romantic of us. Indeed, someone had the good idea to dub a balcony on a medieval building in Verona, Italy, ‘Juliet’s balcony.’ It has spawned a lucrative industry targeted at lovers and is one of the must-see sights of Verona. It is so crowded in the summer that one can hardly move in its vicinity. 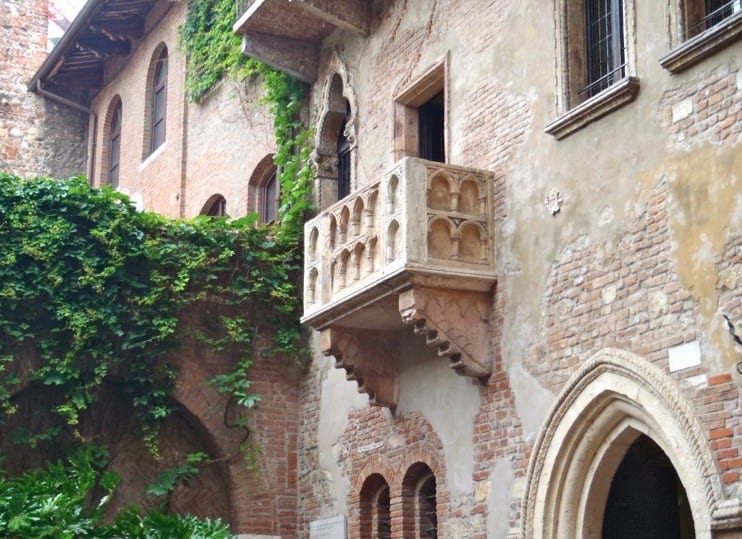 The Romeo & Juliet balcony scene is a romantic one, reflecting the general notion that Romeo and Juliet is a romantic play. The play certainly starts out like that, with the two lovers falling in love at first sight, then talking love-talk in a moonlit garden, and running off the next day to get married. But halfway through the drama, on the very next day, in fact, the play turns sour and the romantic element disappears in the face of the horror show that the story becomes.

While watching the balcony scene we are caught up in the touching spectacle of these two beautiful young people and their intense feelings. We watch as they go too far and plan to marry. We are still with them, forgetting that this girl is only fourteen and in the care of an irresponsible governess who is not going to jerk her into a sense of reality but, instead, connive with her in a dangerous plan that will lead to disaster.

The appealing thing about the balcony scene is that we are eavesdropping on the most intense of adolescent emotions and raging teenage hormones, all packaged in some of Shakespeare’s most beautiful poetry. It is the poetry that makes this scene so special.

Romeo has been smitten by Juliet after gatecrashing her father’s party. He and his friends leave. Irritated by their mockery he gives them the slip and climbs over the wall of one of Capulet’s orchards – the one that adjoins the Capulet house. He sees a light come on at a window and he says ‘But soft, what light through yonder window breaks?’ He wishes that it were Juliet’s candle: ‘It is the east, and Juliet is the sun,’ he says, wishing.

A door opens on to a balcony and someone holding a candle comes out on to it. He draws in his breath. Perhaps it is Juliet! Yes, it is, he can see that now. ‘It is my lady. Oh, it is my love!’ She is standing there, gazing out on the shadowy orchard. If she says anything he is going to answer her, but he can’t believe that it will be about him if she does speak. His thoughts return to the moment of first seeing her – to her eyes. It was as though two of the brightest stars in heaven, having some business elsewhere, had begged her eyes to take their place. Even then, ‘the brightness of her cheek would shame those stars.’

He watches her, and then comes one of the most sensual images in all of Shakespeare:

‘See how she leans her cheek upon her hand!
O that I were a glove upon that hand
That I might touch that cheek.’

She’s an angel! Then she says one of Shakespeare’s most famous lines: ‘O Romeo, Romeo, wherefore art thou Romeo?’ It means why are you Romeo?

Should he listen for more? Or is this the best time to speak?

This is where Juliet speaks the famous monologue, which includes ‘what’s in a name?’ and ‘That which we call a rose/By any other word would smell as sweet.’ She is lamenting the effect of the terrible feud that is keeping her and the boy she’s fallen in love with apart, a feud in which there should be no contact between two people bearing the names of the feuding families.

Then he startles her by showing himself, standing beneath the balcony, and speaking. He says he’ll be rebaptised with a new name. ‘Henceforth I never will be Romeo.’

They very soon declare their love for each other and by the end of the scene they have resolved to be married the next day.

The scene is full of images of celestial bodies – the stars, the sun, the moon, and the planets. Shakespeare uses them to create images of beauty but they also fulfill a thematic function – that of reminding us of the ever-present stars that control our fate. As we watch these intense teenagers we have, at the back of our minds, the Prologue’s assertion that they are a pair of ‘star-crossed lovers’ and that they are soon going to die.

One the balcony scene is over we see the anger of Fate, in that it wastes no time in thwarting the intentions of the lovers and the hope of a happy ending on the part of the audience.

What Were The Problems Between The Montagues and the Capulets?