Edward de Vere, 17th Earl of Oxford, is a name that evokes curiosity from some and frustration from others. Today, it is most commonly associated with theories about Shakespeare’s supposed true identity.

Edward de Vere was born on the 12th of April 1550 in Hedingham Castle, Essex, England. He was born heir to one of the oldest earldoms in England and the only son born to parents John and Margery. When his father died, Edward inherited an estate worth, by today’s standards, £1.2 million.

As a young man, de Vere was well educated. He learned French, Latin, dancing, writing, and drawing. Due to his status, he had personal tutors and ended up as a ward of the Queen, living in Cecil House, after his father died. De Vere was awarded a degree from Cambridge in 1564 and a Masters of Arts from Oxford in 1566. He was admitted to Gray’s Inn in 1567. As a young man, peers noted his desire for expensive clothing and jewelry, as well as the pleasure he took in spending money. 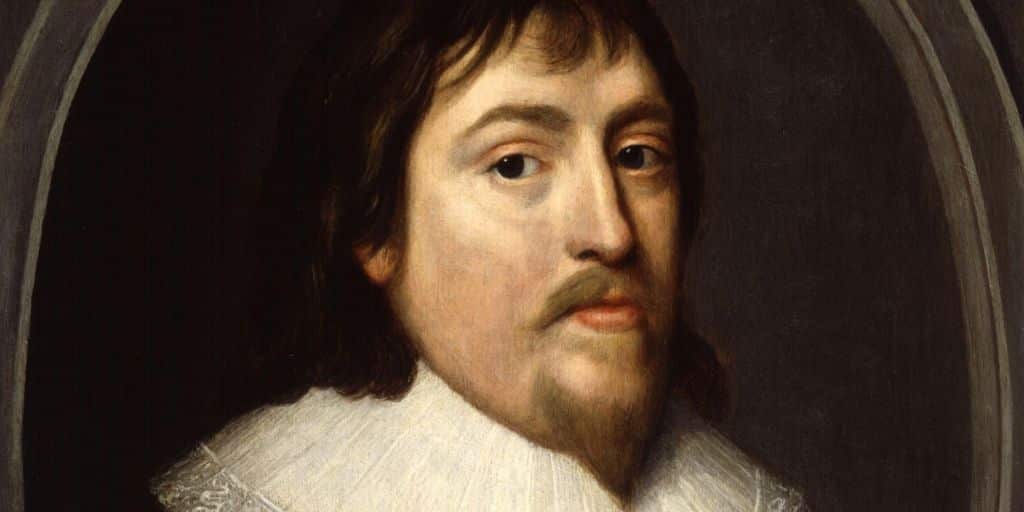 Over the following years of his life, he served the Queen’s military campaign in Scotland and took a seat in the House of Lords. De Vere married in 1571 to Anne Cecil, a fifteen year old.

De Vere, importantly, enjoyed writing poetry. There are several dozen now attributed, officially, to his name. De Vere was briefly put in jail after a Gentlewoman of the Queen’s Bedchamber gave birth to his child. Some evidence suggests that he outfitted and commanded his own ship in the Spanish Armada.

His wife Anne died in 1588, and de Vere married Elizabeth Trentham, one of the Queen’s Maids of Honor. She gave birth to de Vere’s legitimate son.

The Oxfordian Theory of Shakespearean Authorship

Edward de Vere is intimately connected to what is known as the Oxfordian theory of Shakespearean authorship. This refers to a broad theory that “William Shakespeare” was a pen name used by a yet undiscovered writer. In this case, “Oxford” refers to his title as the 17th Earl of Oxford.

The theory of any alternative author dates back to the 1850s with the publication of a book titled The Philosophy of the Plays of Shakespeare Unfolded by Delia Bacon. Bacon believed in the “group theory” of Shakespearean authorship, or that multiple people wrote his plays and poems. Oxford is mentioned briefly in the book, along with Francis Bacon and Sir Walter Raleigh.

The theory, as it relates to Oxford specifically, began in 1920 with the book Shakespeare Identified in Edward de Vere, 17th Earl of Oxford. The author believed, as many Oxfordians do, that Shakespeare’s lack of education and other information from his life did not match up with the person who wrote the plays. He believed that Oxford’s personality was a better match for how “Shakespeare” wrote aristocrats and the poor especially.

Evidence in Favour of and Against the Oxfordian Theory of Authorship

Oxfordians, or those who support this theory of authorship, believe that any evidence in the historical record supporting a man named William Shakespeare as the author of the plays and poems has been doctored to conceal the true identity of Oxford. It is part, some believe, of a larger conspiracy theory.

Another important part of the theory is the alignment between events in Oxford’s life and events in Shakespeare’s plays, sonnets, and long poems. Oxfordians often cite the events of Hamlet as their main point of evidence. One line in particular, “young men falling out at tennis,” is often related to a famous fight Oxford got into on a tennis court. Additionally, Oxfordians cite evidence in poetry known to belong to Oxford. They match it against writing done by “Shakespeare.” Specifically, the format that Oxford used, that of six-line pentameter stanzas (such as are found in Venus and Adonis). Some readers also draw parallels between the “dark lady” in Shakespeare’s sonnets and Oxford’s poem “Anne Vavasor’s Echo.”

One of the main questions that come up when considering the possibility of an alternative, anonymous author, is why? Why would the true “Shakespeare” want to hide his identity? For those who support this theory, it is believed that Oxford hid his identity to avoid breaking a taboo in regards to aristocrats publishing poetry and plays. Plus, some of the subject matter addressed in both those formats might’ve been troubling in its own right.

Literary experts, of course, discount much of what Oxfordians believe in regards to Oxford’s authorship of Shakespeare’s works. They point out that Oxfordians use biographical details, apparent allusions in the plays and poems. Some can relate details from Oxford’s life to details in Shakespeare’s stories.

One of the most important things that historians cite to discount Oxford as the “true” author of Shakespeare’s plays is that Oxford died in 1604. Shakespeare wrote twelve plays after this date. Looney, the author of Shakespeare Identified in Edward de Vere, 17th Earl of Oxford, believed that the later plays were written by people other than Oxford, posing as Shakespeare. Some were likely, he states, left incomplete and finished by others. He also cites the line “ever-living poet” in the dedication to Shakespeare’s sonnets, claiming that it was evidence that the poet was dead at the time the book was published.

One of the final, most impactful reasons why the Oxford Theory has fallen out of favor is the fact that Tudor aristocrats had no reason to hide their identities. The convention of not publishing under their names was regularly broken at that point. It was more frowned upon than enforced. Today, no play in de Vere’s name survives, nor is there evidence that he ever wrote one. There are several other theories that pose someone else other than a man named William Shakespeare wrote his plays. These include the Prince Tudor theory and various group theories.

Montagues and Capulets: What’s The Story?