You are here: Home1 / Welcome To The No Sweat Shakespeare Blog!2 / Shakespeare's Works3 / ‘Thinking Like Shakespeare’, A Book Review

I have come across a book whose title compelled me to open it as it lay on my desk among other new books. Like the book’s contents, the title is both playful and serious and it struck at several levels of my consciousness. It is the new book by Scott Newstok, professor of English at Rhodes College, Memphis Tennessee, How To Think like Shakespeare: Lessons From A Renaissance Education.

The word ‘Shakespeare’ is an immediate draw for someone like me, of course. And then I began to wonder. It sounds like a self-help book – ‘how to make your life better,’ ‘how to make new friends,’ ‘how to be more assertive,’ and so on: you know the kind of thing. Also, as a fan of American comedian, Sarah Cooper, whose Donald Trump whisperings begin ‘how-to,’ as she lip-synchs Trump’s most idiotic ponderings, which bear no resemblance to thinking, I thought it could be a satirical book. Whatever the book may have been about, though, the word ‘Shakespeare’ in the title made me reach for it. 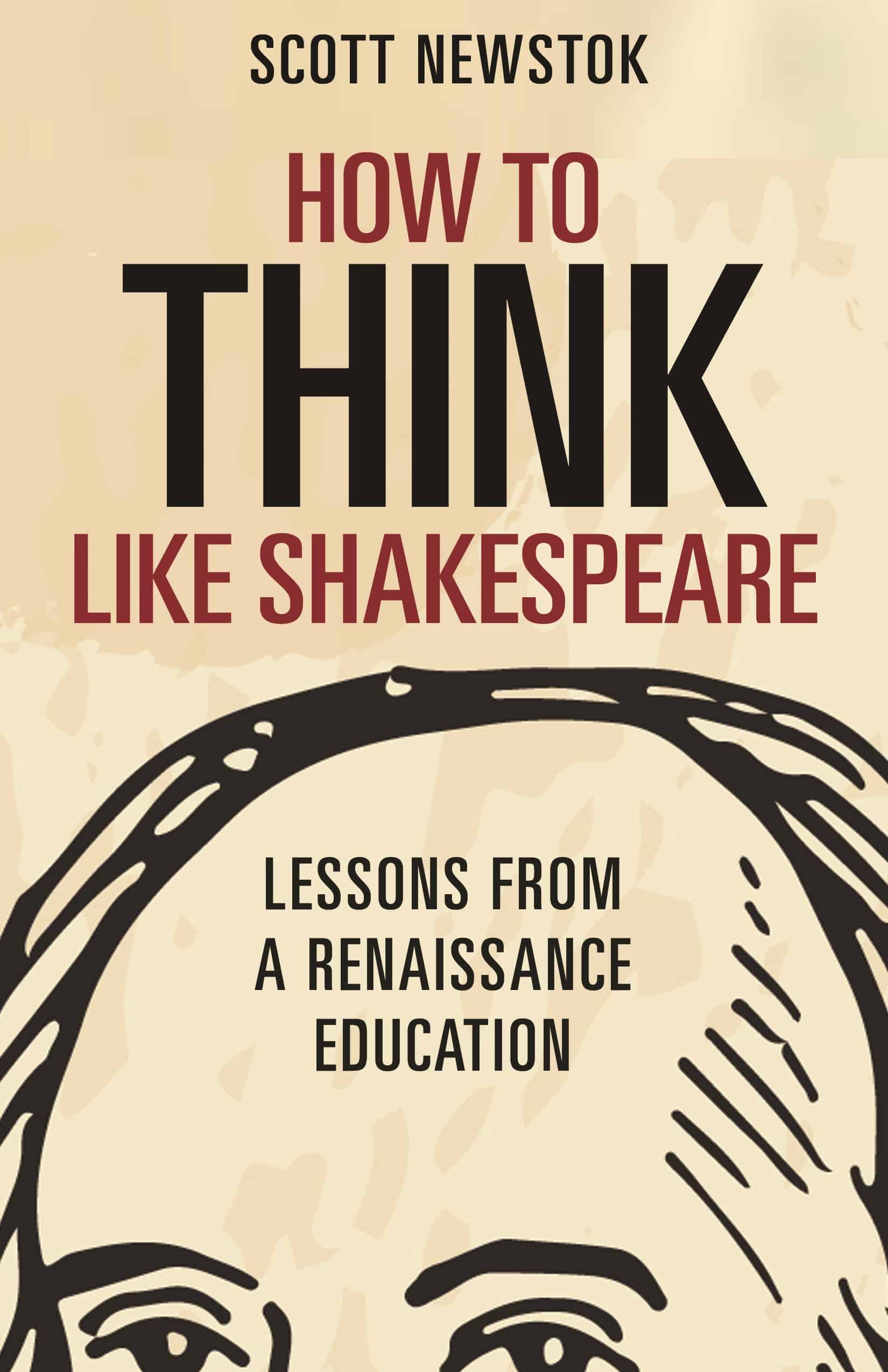 So I began reading, albeit with those associations in my mind, and to my surprise, had difficulty setting it aside. It is not a self-help book, unless you are thinking in the very broad sense of helping our western, and particularly American, education system to set itself on a different, more productive, path. It is also not a satirical essay. It is, in fact, more of a history – a serious history of thinking, and although serious, it’s very readable, and even playful.

But it is more than a history. It is an entertaining demonstration of how we can recover from the deadweight of information that modern education practice lays on our kids.  Information in modern Western culture has taken the place of knowledge in the Aristotelian sense, where it is thinking rather than factual information that constitutes the kind of liberal education that not only engenders creativity but equips students to be productive and responsible citizens.

And that’s what this book is about. – thinking. But it is about much more than that. It is an exploration of education, of the type that we experience both in our post-industrial world and in the world of our Renaissance ancestors that produced the likes of William Shakespeare and his fellow writers who stand out in literary history as the generators of the ‘golden age’ of drama. It also touches on their working methods and explodes popular notions of how they made their plays.

Newstok’s central argument is that we have lost sight of what should be the ends of education. Do we really want school and college students to leave their formal education with their heads full of information that is going to be useless in helping them cope with the world they are going to encounter? After all, even the small amount of the information that may be relevant to some chosen line of work will become dated and redundant very quickly in a fast-changing world. Or do we want them to be thoughtful, confident, articulate members of society who have been taught how to respond to that swiftly moving world, as Aristotle proposed? If the latter, targets, test scores, and grades are irrelevant and distracting. The ability to think, which can be taught, is not.

It is an old argument: a long-lived educational debate – a liberal versus a utilitarian education – that Newstok is making his contribution to. Where he brings something new is in the way he argues the liberal case in a text saturated with profound and entertaining quotes from great thinkers, stretching right back in time, encompassing all the ages from the pastoral to the micro-technological. If I have one small criticism of this book it’s that perhaps the text is a bit heavy with those references, which could distract some readers and interfere with the reading flow. That danger is somewhat mitigated, however, in that the quotes are incorporated in the body of the text rather than being in footnotes.

Teaching students to think, not how to pass examinations and get good grades, should be the job of the teacher. Certainly, thinking can be taught. Thinking is a craft, like any other craft that young people can be trained in, just as they can be trained to make tables or horseshoes. And like the cabinet-making and the blacksmithing tutor the teacher may use technology, as those artisans do, like chisels, hammers, screwdrivers, anvils, which are just tools, not ends in themselves. Favourite modern teaching tools, the computer and the internet, do not replace the teacher, they help her. There’s often confusion about that in modern education. Renaissance schoolmasters used technology too: they used books. But they did not expect the book to be the teacher. And it is in the Renaissance era, with those schoolmasters, that Scott Newstok finds his inspiration.

The school day in Elizabethan England was nothing less than torture for a child. Long hours, corporal punishment for the slightest thing, freezing cold classrooms, were one aspect of what education was, but it is not those things that inspire Newstok: it is the curriculum that represents “the fabric of thought itself” – the traditional arts of rhetoric and conversation.

And with that, we come to the riveting word in the title –Shakespeare. Where does he come into it? Well, Newstok holds the Bard up as the ultimate result of a Renaissance liberal education. There has not since then been anyone like him, nor indeed like several of his contemporary writers. He, and others, like John Webster, Christopher Marlowe, and Ben Jonson, may be regarded by us as natural geniuses, with their wonderful works coming directly from within themselves, out of the blue, or from God. Newstok argues that, far from that being so, they are the result of their education. And also, they had been taught the craft of writing plays, been tutored in it, done their apprenticeship, then practiced it as a wheelwright practices the making of wheels.

One of the chapters, Of Imitation, relates closely to my own particular interest in, and my thinking about, Shakespeare as a working writer in the sense of being a playwright, a maker of plays in the artisan sense rather than as an artist. His methodology is a product of that.

Writing plays was Shakespeare’s trade, which he did entirely for money, as he would have done with tables if he had been trained as a cabinet maker. He could have been trained in anything, as his father was in glove-making, but he was trained as a playwright. Soon after arriving in London and being engaged as an actor, he began working with the top playwrights of his time. He was a fast learner and it wasn’t long before his name began appearing on the billings – at first along with other names, and eventually on its own, acknowledging him as the principle writer of that play. No-one would argue that he did not have an innate poetic talent but he would not have been able to put that to use in the lucrative entertainment market if he had not been trained in how to do so.

On that point, something touched on by Newstok in interviews too, is the practice of collaborating in the writing of plays. Debate, rhetoric, and conversation – in short, teamwork – were central in the school curriculum. As a result of their education, the London playwrights worked naturally together, rather than in isolation. Shakespeare began like that, in a team, working frantically to get a play on to the stage as fast as possible. All through his writing career, he continued to work with others – sometimes in a team, sometimes helping other writers edit texts that they were working on and sometimes having friends do the same for him. Even after his retirement, he continued to work with young writers.

Some writers, like T.S Eliot, used an allusive technique in which he alluded to previous works, sometimes by inference and sometimes by outright copying from them. Shakespeare was also one of those writers and he did it a lot. Not content just to take the story for his Antony and Cleopatra from North’s Plutarch, he actually copied some passages so closely that it would amount to plagiarism today – something that didn’t exist in his time. That by just changing a word here and there of the “The barge she sat in” passage – Enobarbus’ description of Cleopatra – he turned it into blank verse in iambic pentameter that fitted perfectly into the structure of the play, including his carefully made thematic structure with its intricate pattern of imagery. He did that, making it his own, and immortal, with minimal changing of North’s passage.

Being free to imitate other writers, even his own contemporaries, something our contemporaries try to avoid making evident, Shakespeare was able to use a technique that can be described as ‘synthesising’ – taking whatever he needed and throwing it into a melting pot, out of which something ‘new’ emerged. That was one of the main ways in which he made plays. And it was something he had learnt in school, and then during his apprenticeship as a playwright.

How To Think like Shakespeare is a refreshing book and a stimulating read. The lively writing is a great treat, with things to smile at as you read.

The argument is not new. As a new teacher in 1968, after five minutes in the classroom, I came to the same conclusion as Newstok has and argued for it throughout my teaching career. Sadly, the opposition to liberal education by those who fund education is very strong. But the pleasure of bathing in Scott Newstok’s pool of affirming authorities as an academic treat is immeasurable.

Find How To Think like Shakespeare: Lessons From A Renaissance Education by Scott Newstok/ Princeton University Press 2020

Why Is Shakespeare Still So Popular In The 21st Century?