These could be costumes for a stage production or just fun ways to picture the characters while reading – but, in any case, the outfits are true to the characters despite their modern look.

Scroll through the four moodboards below to pick out which character’s outfit matches your aesthetic! 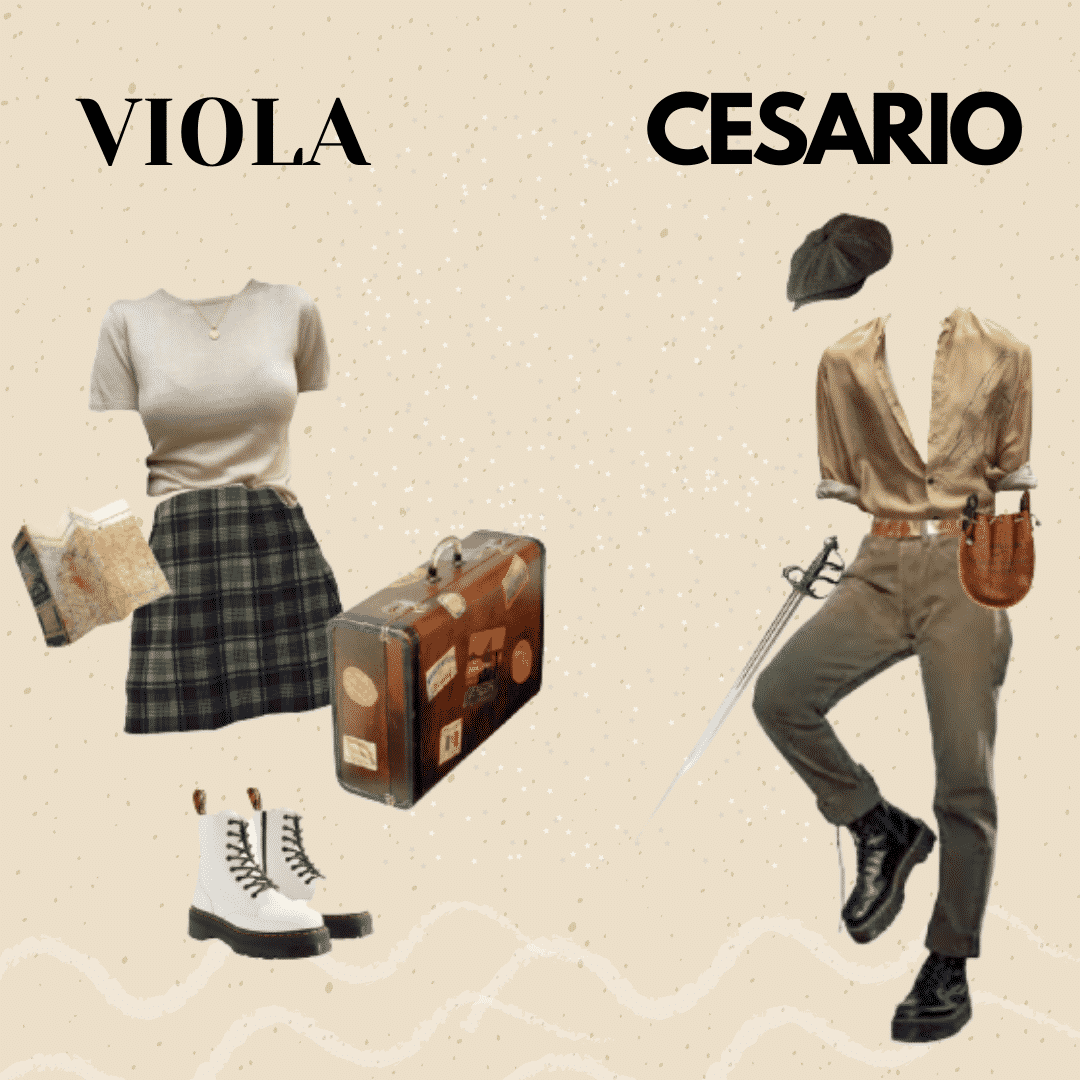 Okay, yeah, this moodboard technically shows off two looks for the same character – but the rest of the characters in the show don’t know that until the end! In Shakespeare’s comedy Twelfth Night, Viola is shipwrecked near a city called Illyria. She believes she is the only survivor of the crash, and so she is forced to try to make a life for herself in this new environment.

But, of course, in those times, it wasn’t safe for a girl to try to fend for herself alone. So, she pulls the classic Shakespeare woman runaway move (see Rosalind, Julia, and Imogen): she dresses up like a guy and changes her name to Cesario.

So, for that change, she’d need an outfit switch! For Viola’s feminine outfit we gave her a suitcase and a map, since she was traveling overseas. Hopefully, that map might give her a little insight as to where on earth Illyria is!

Then, when she changes into her identity to Cesario, she has to don a more masculine look. She grabs some manly pants and a cap (to hide her hair – because every woman who dresses as a man in Shakespeare can magically fool people just by hiding her hair).

She has two key props in her Cesario look that are important to the play – the sword and the money purse. The sword comes into use when Sir Toby convinces Sir Andrew Aguecheek to issue a challenge against Cesario for Olivia’s heart. Neither of them are swordsmen/women, but Viola/Cesario gets her sword out and is prepared to fight as best she can anyway.

The fight is interrupted by Antonio, the pirate that’s been sailing with Viola’s twin brother Sebastien. Antonio believes Viola is Sebastien, and so goes to save him – but is immediately arrested for his well-known pirate-y crimes. Antonio had lent Sebastien money, and so he asks for the money back for his bail.

But, of course, it’s really Viola and not Sebastien. Viola is super confused and tries to offer some money from her purse, but says she doesn’t have a lot.  Antonio is confused, Viola is confused, everyone is confused – but it’s the first glimmer of hope for Viola that her brother might actually be alive. 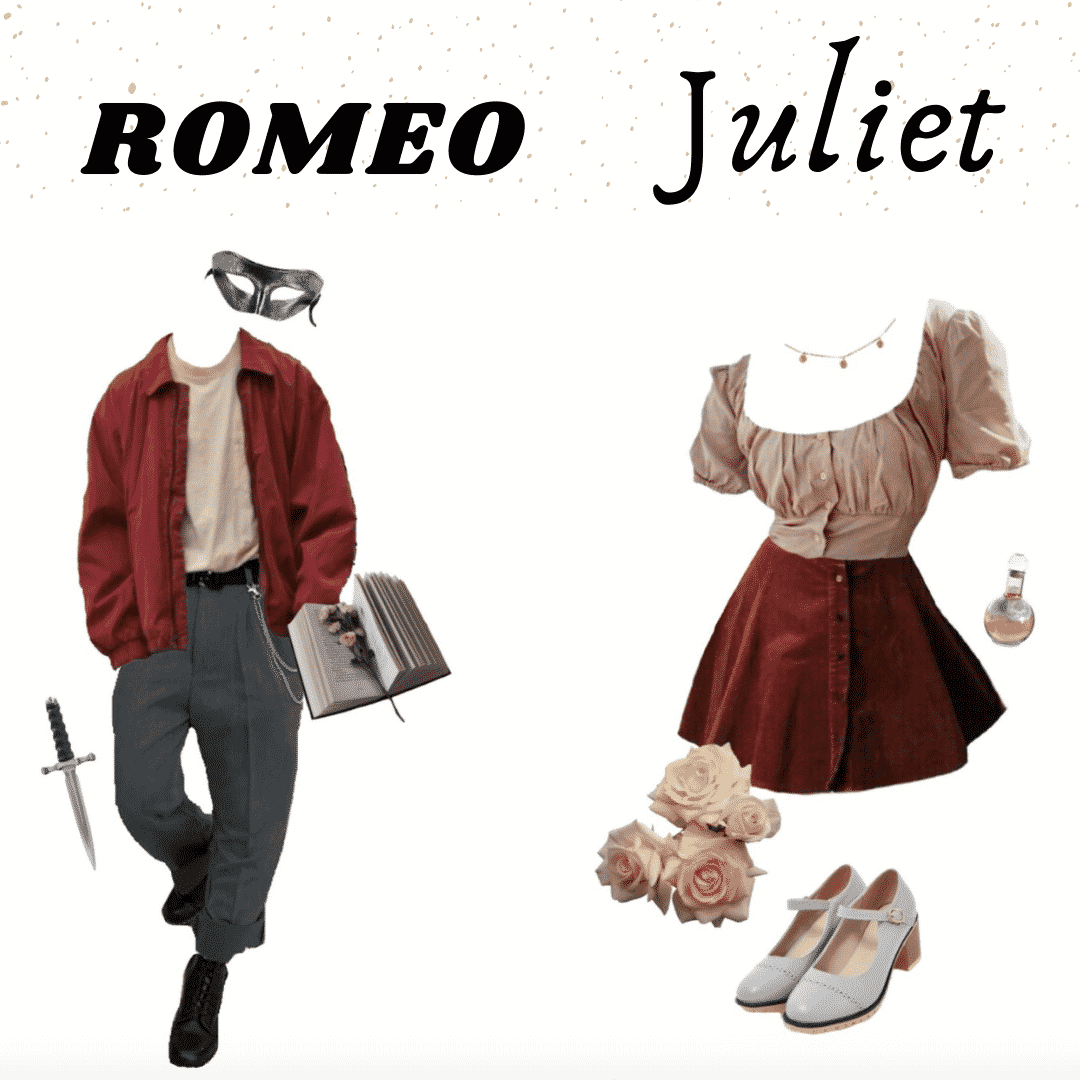 Okay, we see how R&J fell in love if they were wearing these outfits. They would look AMAZING – and their color palettes match, just like their hearts! They even both have the same roses – Juliet’s would likely be in her hand, and Romeo’s in his book. Because you know that he had to be a broody love poem guy.

Romeo has two signature props here – the mask for the Capulet ball at the beginning of the play, and his “happy dagger,” which Juliet takes to end her life in the last scene of the play. Juliet has the poison bottle, which Romeo procures from the apothecary to kill himself when he believes Juliet is dead.

Juliet, as we all unfortunately know, wakes up in the tomb just moments after Romeo has drunk the poison himself and died. Juliet is so distraught that she grabs the bottle of poison and is dismayed to find it empty: she cries, “O churl, drunk all and left no friendly drop to help me after?” (5.3.175-176). So, technically, she’s the last one who has that prop.

Romeo and Juliet have so many looks throughout the play that you could make several aesthetic moodboards for them. This look, though, is probably the day after the ball — still dressing to impress, but without being so fancy. 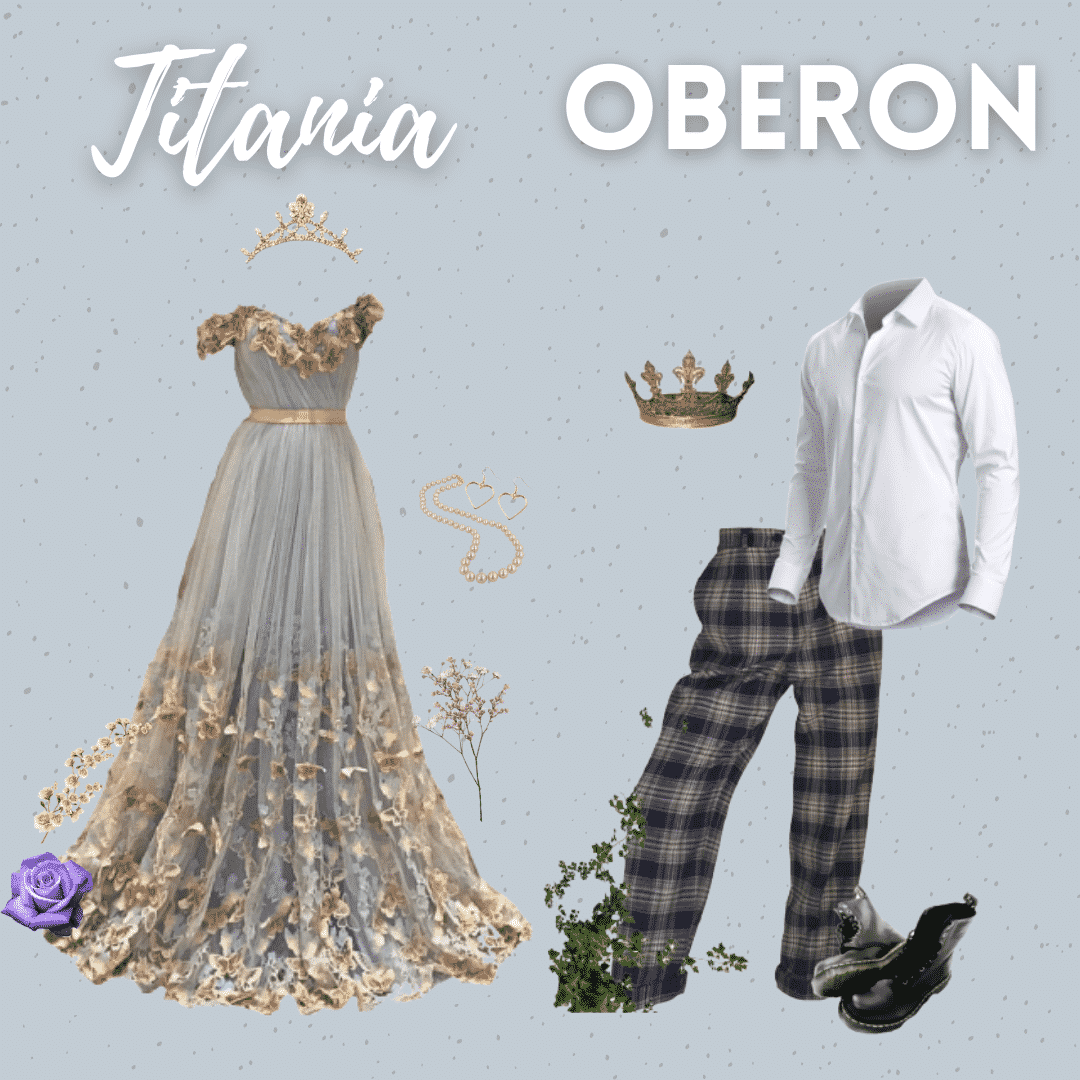 Ah, the king and queen of the fairies – but also of fashion! Since they’re royalty, these two had to be a little more glammed up. (But, just for show, they’ve got the crowns, too.) Titania’s leafy dress almost blends in with the forest around her, but she also gets some flowers to add to the forest fairy dynamic.

Speaking of flowers, uh-oh: can you spot the plot-altering prop Titania’s got? Yep, the purple flower over on the bottom of her skirt there? That’s what Oberon calls “love-in-idleness,” the flower he’s filled with love potion. The rules of the love potion are that it be administered on a sleeping person, who will then fall in love with the first living thing they see upon waking. Titania, of course, spots Bottom, who’s been turned into a half-donkey – providing Oberon with lots of mocking delight.

Oberon over there has a ‘fit that’s as commanding of the forest as he is. He may be a fairy, but dude is no-nonsense. He wants to take the changeling boy that Titania’s adopted out of respect to the baby’s deceased mother. And he goes to all kinds of means (see: donkey love potion) to get what he wants. So, he gets crisp black and white look with boots made for stompin’ all over that forest. 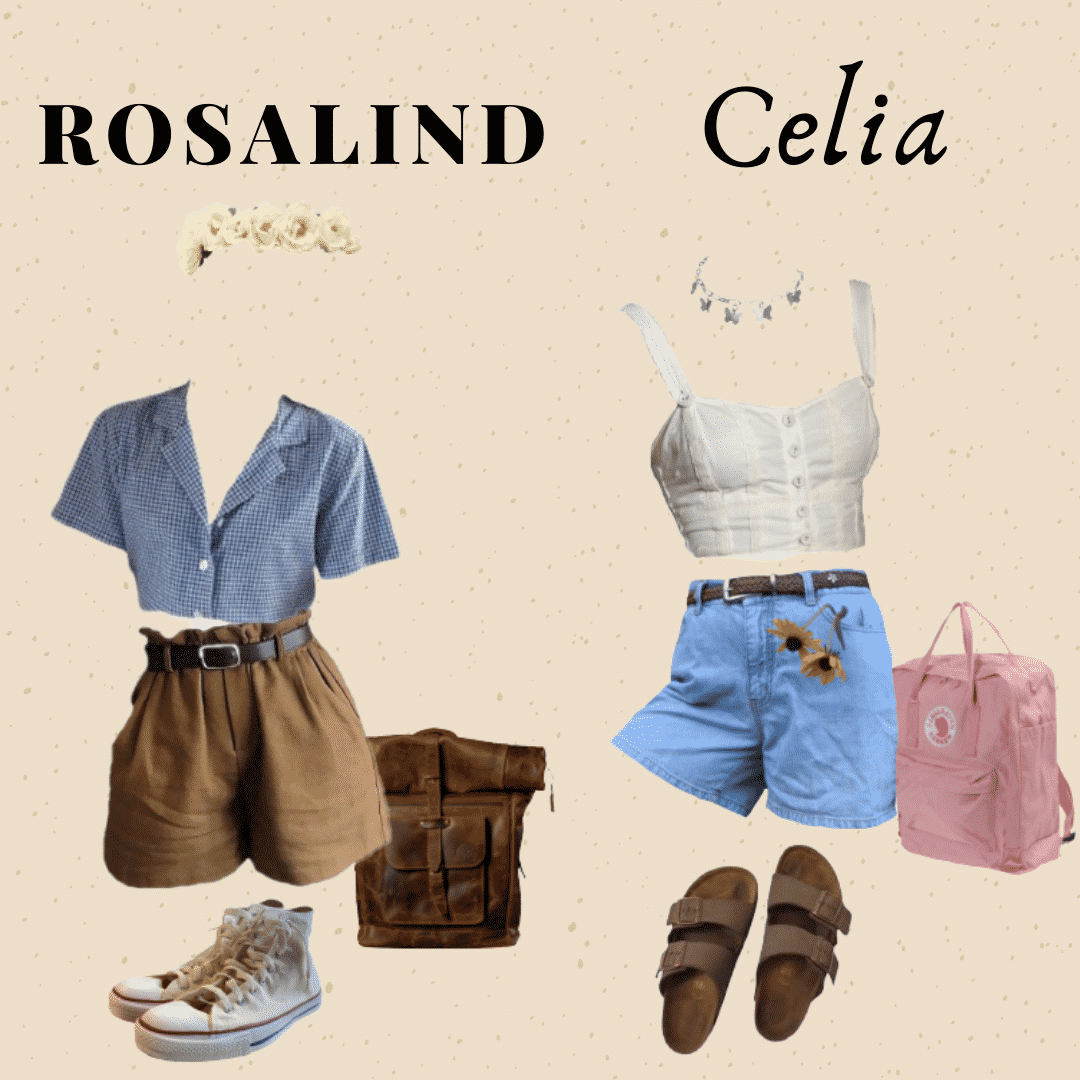 These girls are your summer aesthetic moodboards personified! Whether you’re a bit more of a tomboy like Rosalind or a sunshine-y girly girl like Celia, there’s something to identify with in each of these looks.

Near the beginning of the play, Rosalind, daughter of a deposed duke, is forced to leave the royal court. Her best friend Celia wants to go with her, so they go out to live in the Forest of Arden. They probably didn’t have a lot of time or space to pack, hence Rosalind’s leather satchel and Celia’s little Herschel bag.

Things are a bit dangerous in the woods, especially for two unaccompanied young women. So, Rosalind dresses as a boy and calls herself Ganymede, and Celia dresses as a farm girl named Aliena. So, for Ganymede, we put Rosalind in clothes that hit right on the border between masculine and feminine — anybody could wear that outfit! Then, Celia as Aliena gets a little in touch with nature for her farm girl identity, so she has flowery shorts and a butterfly necklace.

Clearly they like their outfits, because Rosalind doesn’t even strip away her disguise when the man she loves, Orlando, comes to the forest and confides in Rosalind (as Ganymede) his love for Rosalind (who, of course, he doesn’t know he’s talking to). You’d think that at that moment Rosalind would reveal her true identity, but nah — she stays in a man’s clothes and identity for as long as possible. This definitely gives us an interesting look into Rosalind’s character from a gender perspective — but also, with this look, who can blame her?

Which aesthetic moodboard was your favorite? Let us know in the comments below which outfit you want to wear the most!