The Tempest Review, The Globe Theatre 2022

You are here: Home1 / Welcome To The No Sweat Shakespeare Blog!2 / Reviews3 / The Tempest Review, The Globe Theatre 2022

This is not only one of Shakespeare’s greatest entertainments with its almost continuous music, including several songs, its magic, lots of belly-laughing comedy, including slapstick, and with an engaging romance at its centre: it is also a profound essay on power in all its forms and, perhaps most interesting for our times, very much about the colonialism that was beginning in Shakespeare’s time and which the developing world is still trying to work out of its system.  But a director can’t emphasise all of those things when presenting the text as a play on the stage and has to make choices. If you want everything at the same level of intensity you should read the text.

Sean Holmes gets it right. He does what Shakespeare would have done – present the text as sheer entertainment, as a very funny comedy. All the serious considerations that inform this great play are still there but by placing the antics of the three comedians, Stephano (George Fouracres), Trinculo (Ralph Davis) and Caliban (Ciaran O’Brien) at the centre of the drama he hits the nail on the head. He manages to embrace those big themes in the performance of those three, expressing them through the comic centre of the production.

Holmes gives the audience their money’s worth of entertainment, as Shakespeare strove to do in his productions. The scene where Ariel distracts the two shipwrecked royal servants from their insurrection with a collection of fashion garments while Caliban almost literally explodes with frustration, is about as funny as anything could possibly be. And even among three outstanding performances, George Fouracres once again shows his unmatchable mastery of comic acting and consolidates his place as a top Shakespearean comic actor. 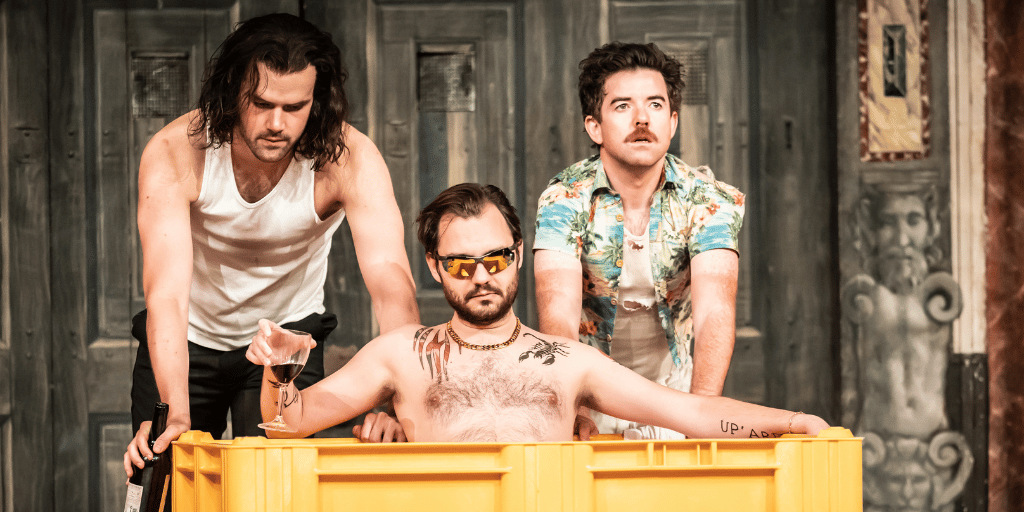 The Tempest is very much about power. The absurdity of the sophisticated European politicians, marooned on a remote island from which escape seems unlikely, dressed in the clothes of courtiers, – sharp yuppie suits –seriously conducting a coup, is underscored in high comedy by the ridiculous bumblers playing out their own insurrection.

All this is done under the gaze of the cruel, autocratic Prospero, who, having been deposed by his brother fifteen years before, has all the power now, and most important, the power to forgive and redeem. Wearing only bright yellow Speedos, in contrast to the European power figures in their expensive suits, the well-endowed magician controls everything through his magic until, at last, he abjures the magic, dons an executive suit and re-enters the world of human politics. Ferdy Roberts plays the role well but in his dealings with Caliban and Ferdinand, and also Ariel, misses the iron-hard side of Prospero’s character by using an almost kindly tone in language that calls for a much harsher delivery,

The Tempest is full of magic, and Holmes has decided to underplay that. Although it’s still there, it is partly done with an unreal dreamlike set, where everything is vividly coloured and weird, from huge yellow crates and plastic props – a blow up duvet and armchair, bright green palm trees and water bottles, instead of magical effects. The magic is in the language and the situations, and it comes through in the high quality of the actors’ delivery, which is how Shakespeare would have done it.

Holmes has an interesting take on Caliban, a character that is always difficult to present on the stage. Described in the dramatis personae section of editions of the text in language like “a savage and deformed slave” producers present him as something not quite human, with scales, hunch-backed, with horror masks, always essentially ugly and very unappetising. Ciaran O’Brien’s Caliban achieves immediate sympathy by being completely human  – an ordinary young man whose only distinctive feature is his obvious depression. This works because it forces us to see his point of view. He complains of having had his country stolen from him and his having been turned into a slave. Even though we laugh all the way through his scenes with Stephano and Trinculo we sympathise with him as they bungle his chance of taking back his territory. When that chance arises he rejoices in the freedom that is coming, in song. When he invites the audience to join him in celebrating it’s a triumphant moment. They raise the non-existent roof with their response as Caliban leads them in a deafening chant of “Freedom!” It’s a wonderful moment in the theatre.

The romance between Ferdinand and Miranda doesn’t work all that well. Apart from being something of a distraction from the comedy there is something not quite right about the casting of Olivier Huband as Ferdinand. He is too old for the part of the young prince. His instant zooming in on the innocent 15 year-old comes across as slightly distasteful. And Shakespeare certainly didn’t intend Caliban to be more attractive and more age-suitable than the young prince, as he is here. In Shakespeare’s text Miranda comments both on the beauty of Ferdinand and the physical repugnance of Caliban and there is a sad mismatch in both cases here.

The Tempest is full of music and in this production the audience is treated to Cassie Kinoshi’s remarkable score, which includes new settings for Shakespeare’s famous songs. The music in this play has an important dramatic function, alternating with thunder and the different sounds of a tempest. In the text, both the music and the thunder are conjured up by Prospero and Ariel, according to the mood of each moment in the play, and continuous, as in a film soundtrack. Holmes misses that, as if he had used the music and other sounds in that way it would not have interfered with his comic interpretation and may well, in fact, have enhanced it.

However, nine out of ten for Sean Holmes and all the cast and everyone involved in this production.

Midsummer Mechanicals Review, The Sam Wanamaker Theatre At The Globe, 2022
Scroll to top