You are here: Home1 / Shakespeare Characters2 / Miranda, The Tempest

Miranda is a central character in Shakespeare’s late play, The Tempest. She is the teenage daughter of Prospero. Prospero was banished to the island, placed in a little boat with his baby daughter, Miranda, and set adrift. She grows up without seeing any human being, apart from her father and a deformed man, Caliban, who was the only inhabitant of the island when the boat was washed up on its shore, and enslaved by Prospero. The play’s action begins fifteen years later.

Shakespeare’s late plays – The Tempest, The Winter’s Tale, Pericles – have a common theme: an elderly man who has become the victim of the sophisticated world of politics and power is regenerated by a young daughter who has not experienced that world, having grown up in the countryside.

Shakespeare was writing those plays during the time he was enjoying the baby Elizabeth, his only grandchild, born 1608. The Tempest was first performed three years later. It seems like more than a coincidence that a man who lived for most of his adult life in London, and had much to do with the royal court, should be so strong on the theme of the relationship between a city man of the world and a girl growing up in the country. 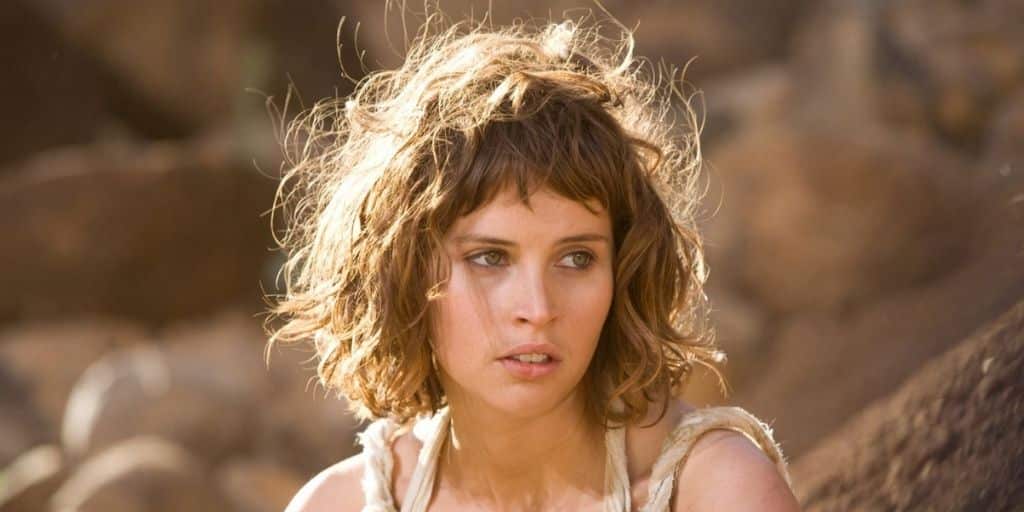 Felicity Jones as Miranda, The Tempest

Prospero had been overthrown as Duke of Milan by his brother. As a scholar, obsessed with learning and knowledge, Prospero had taken his eye off the ball and his younger brother had taken advantage of that. A kindly courtier had filled the boat with Prospero’s books so he was able to continue with his studying in exile.  During the fifteen years on the island Prospero had studied so much that he had surpassed all knowledge of science and entered the realm of magic. When we first see him he is a fully-fledged magician. Miranda has been tutored by him and she is now an educated young woman, although she knows very little about the outside world.

As Ferdinand wonders about this strange island, he comes across Miranda. Miranda is amazed at seeing him and thinks that he is perhaps a spirit. Prospero, invisible, observes the two. so often that the young people display for each other but he affects hostility towards the young man and he forbids the relationship between the two in order to place a higher value on his daughter’s affection. T

The play is full of action, including a plot by Alonzo’s brother to overthrow him, a plot by Caliban with the Butler and the jester to overthrow Prospero, while all through this the young couple have eyes only for each other.

Prospero forgives those who have done wrong to him. The young couple are married and Ferdinand takes her back to Europe to be his bride. Miranda’s last appearance is in the final scene of the play. Prospero reveals himself to all the characters. When Miranda sees them she utters one of Shakespeare’s most famous exclamations.

Oh wonder!
How many goodly creatures are there here!
How beauteous mankind is! Oh brave new world,
That has such people in’t.

Traditional criticism has interpreted Miranda as a living representation of female virtue. She is typically viewed as having internalised the patriarchal order of things and sees herself as subordinate to her father. She is kind and loving and compassionate in addition to being obedient to her father and is seen as “perfect and fearless created of every creature’s best.”

The play is unusual in that it has only one female character- Miranda. She is surrounded by strong male figures and dominated by them. Her innocence and vulnerability are the things that allow her to be manipulated, first by her father and then by Ferdinand.

However, she is a strong female presence with an important role in the play and its outcome. Her clear feminine traits are in opposition to her father’s more violent instincts. And the opposition of these two forces move the play’s plot forward.

Miranda has a strength to her, and as she develops in this play she proves herself willing to challenge Prospero’s power. She questions his treatment of the shipwrecked sailors and also defies his command to have nothing to do with Ferdinand.

I pitied thee,
Took pains to make thee speak, taught thee each hour
One thing or other. When thou didst not, savage,
Know thine own meaning, but wouldst gabble like
A thing most brutish, I endowed thy purposes
With words that made them known.

Your tale, sir, would cure deafness.

How features are abroad
I am skilless of, but, by my modesty,
The jewel in my dower, I would not wish
Any companion in the world but you,
Nor can imagination form a shape
Besides yourself to like of.

Sweet lord, you play me false.

O wonder!
How many goodly creatures are there here!
How beauteous mankind is! O brave new world
That has such people in ’t!