The Roman general, Titus Andronicus, returns to a hero’s welcome after defeating the Goths in a ten-year campaign. Among his captives is the queen of the Goths, Tamora, and her three sons, Alarbus, Demetrius and Chiron. Also accompanying her is her lover Aaron, a Moor.

Titus has lost many sons in the war. To give them a fitting funeral, Lucius, one of Titus’s three surviving sons, suggests a human sacrifice. Titus singles out Alarbus, Tamora’s eldest son, and although she pleads for her son’s life Titus is unrelenting. Lucius seizes Alarbus. And he and his men hew his limbs and make a sacrifice of him.

The emperor dies and the crown is available. When it is offered to Titus, he declines and recommends Saturninus, the oldest son of the dead emperor. He suggests that Saturninus take his beautiful daughter Lavinia as his wife and empress.

After Saturninus is crowned, he frees Tamora and her sons. Bassianus, Saturninus’ brother, objects to the proposed marriage of Saturninus and Lavinia because Lavinia is already betrothed to him. With the help of Lavinia’s brothers, he steals her away. Titus is angered and he kills his son, Mucius, when he tries to prevent Titus from pursuing the lovers. Later, Saturninus decides that he prefers Tamora to Lavinia, then marries Tamora and makes her empress. Tamora begins plotting revenge against Titus for allowing the slaughter of her son. Before the palace, Tamora’s lover, Aaron, exalts Tamora and predicts that she will bring ruin to Rome.

Tamora’s sons Demetrius and Chiron have both fallen in love with Lavinia, and they quarrel over her. Each claims the right to take her from Bassianus. After failing to dissuade them from pursuing her, Aaron suggests that they share the lovely Lavinia by taking turns raping her in the seclusion of a forest. The occasion will come during a hunt in the woods for game. Emperor Saturninus, Queen Tamora, and many others are to take part in the hunt. On the day of the hunt, Aaron and Tamora rendezvous in the woods. Aaron gives her a letter to present to Saturninus. Its contents will aid Tamora’s desire to bring down Titus.

When Bassianus and Lavinia discover Aaron and Tamora together, Tamora fears that the intruders will tell the emperor. She calls out for her sons. When they arrive, Tamora pretends Bassianus has threatened her. The sons kill Bassianus and throw him in a pit, then drag Lavinia off to rape her. Not only do they rape her, they also mutilate her, cutting off her hands and tearing out her tongue. Aaron leads Titus’s sons Quintus and Martius toward the pit where Bassianus lies dead. Martius falls in. While Aaron goes to fetch Saturninus, Quintus falls in, too, trying to rescue Martius. Saturninus arrives with Aaron, along with Titus, Lucius, and attendants. Martius, who has discovered the body, informs Saturninus that his brother, Bassianus, is dead. Tamora then presents Aaron’s letter to Saturninus. It falsely implicates Martius and Quintus in the murder of Bassianus.

Saturninus imprisons them, and the court later sentences them to death in spite of Titus’s pleas on their behalf. Lavinia cannot testify in their favor, for she has no tongue. When Titus, Lucius, and Titus’s brother Marcus discuss their options, the evil Aaron arrives and tells them that Saturninus will free the sons of Titus, if Marcus, Lucius, or Titus cuts off his hand and sends it to the emperor. It is Titus, though, who allows Aaron to cut off his hand and take it to Saturninus. Within a half-hour, however, the emperor returns the hand, together with the heads of Titus’s imprisoned sons, in a show of scorn and contempt. Titus orders his son Lucius to flee the city and enlist an army of Goths to overthrow Saturninus. The loss of his sons takes a severe toll on Titus. He begins to go mad. Then Lavinia informs Titus and others about her rape and mutilation by writing in sand with a stick held in her mouth.

Meanwhile, Tamora has a baby. It is obviously Aaron’s because it has the dark complexion of a Moor. Worried that the emperor will find out about it, Tamora wants it killed. Aaron has other plans. First, he kills the baby’s midwife and nurse to keep secret the baby’s existence. Next, he substitutes a white baby for his own, then leaves with his child to go to the Goths to have them raise it. By this time, Lucius is marching on Rome with his army of Goths. Aaron and his baby, who have been captured, appear. Aaron agrees to tell all he knows if his child is allowed to live. Titus cuts the throats of Tamora’s sons Demetrius and Chiron, then has a pie prepared of their flesh and serves it to Saturninus and Tamora. He kills Lavinia to put her out of her misery, then kills Tamora. Saturninus kills Titus in retaliation, and Lucius kills Saturninus. Lucius takes command of Rome as the new emperor. Lucius orders Aaron to be buried up to his chest and starved to death.

And that’s a quick Titus Andronicus summary. What are your thoughts – anything unclear, or missing? Please let us know in the comments section below. 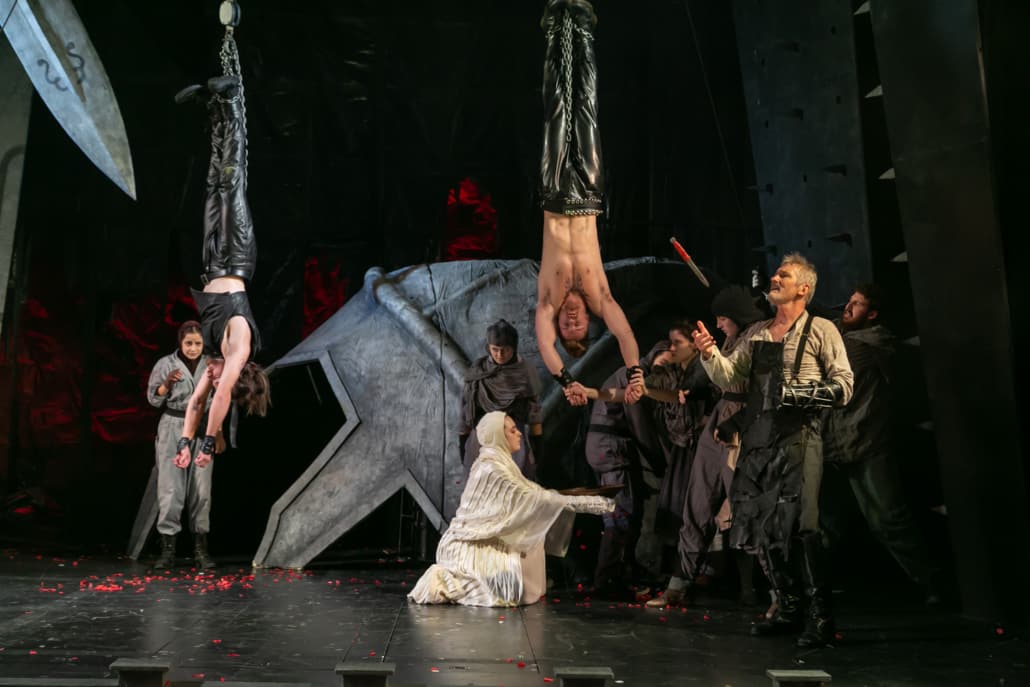