You are here: Home1 / Shakespeare Play Summaries2 / As You Like It Summary

Here is a short As You Like It summary:

Orlando, the youngest son of Sir Roland de Boys, is ill-treated by his brother Oliver. When he responds to the general challenge issued by the Duke’s wrestler, Charles, Oliver tells Charles to injure Orlando if he can manage it. The Duke’s daughter, Celia, and her cousin, Rosalind, watch the match and Rosalind falls in love with Orlando. Orlando wins but the Duke gets angry when he discovers that Orlando is the son of his old enemy, Sir Roland de Boys. Rosalind gives Orlando a chain to wear and he falls in love with her.

The Duke unexpectedly banishes Rosalind and she decides to find her father, the real Duke, who has been overthrown by his brother, Celia’s father, Frederick. Duke Senior lives in the forest of Arden. Together with the court jester, Touchstone, the girls set out, disguised as a country boy, Ganymede, and his sister, Aliena. Coincidentally, Orlando, fearing for his life, has also left home, accompanied by his father’s servant, Adam.

In the forest, the group from the court encounters a young shepherd, Silvius, and watch him being rejected by a shepherdess, Phoebe, as he declares his love for her. They meet an old shepherd, Corin, who is looking for someone to take over the sheep farm. Ganymede, who wants to settle in the forest, buys the lease.

Duke Senior, unaware that his daughter is looking for him, is living a simple life with some courtiers and huntsmen. One of them is the melancholy Jaques, who reflects constantly on life. Orlando and Adam arrive and the outlaws welcome them and feed them.

Orlando hangs some love poems that he has written to Rosalind from the branches of trees. Rosalind and Aliena find them. Ganymede helps him to cure his lovesickness by wooing him, Ganymede, as though he/she were Rosalind. A country girl, Audrey, falls in love with Touchstone and abandons her faithful William because of her love for the fool.

Oliver is searching for his brother. He has an accident and Orlando saves his life. Orlando is slightly injured and when he tells Ganymede about it she faints. Oliver and Celia fall in love. Phoebe falls in love with Ganymede. It all becomes very complicated. Hymen leads a masque; Rosalind re-emerges as a woman, and her father gives her to Orlando; Phoebe accepts Silvius; Orlando’s older brother returns from university with the news that Celia’s father, Frederick, has retired as Duke to become a hermit; Jaques goes to join him. There is a joyful dance to celebrate the four marriages and the happy ending.

And that’s a quick As You Like It summary. What are your thoughts – anything unclear, or missing? Please let us know in the comments section below. 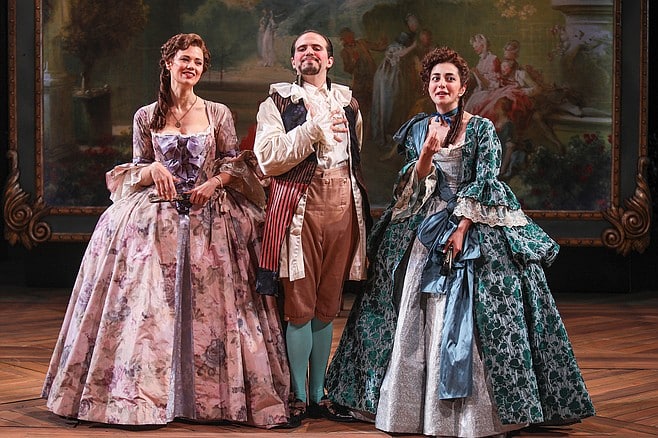 As You Like summary on stage with Meredith Garretson as Rosalind, Vincent Randazzo as Touchstone, and Nikki Massoud as Celia