Here is a brief Measure for Measure summary:

Depravity and sexual licence have become an issue in Vienna, and the Duke, Vincentio, who has decided to take a break from ruling, appoints Angelo to rule in his absence, assisted by a trusted councillor, Escalus. The first thing Angelo does is pronounce that he is going to enforce the immorality laws, to try and stamp out the epidemic of ‘loose’ living.

A citizen, Claudio, has got his fiancée, Juliet, pregnant. He is tried and sentenced to death. His sister, Isabella, who lives in a convent, about to take her vows as a nun, hears the news. She hurries to Angelo to beg for mercy on behalf of her brother. Angelo denies her request but as she persists he is overwhelmed by lust for her and tells her he will think about it, and that she should return the next day to hear his verdict. She goes back the next day and he tells her that he will pardon her brother if she will have sex with him.

In the meantime, Duke Vincentio has not left Vienna but disguised himself as an itinerant friar, and is moving about among the people to observe the effect of Angelo’s rule. He tells Juliet to prepare for Claudio’s death, assuring her that there is no way around it.

Isabella is horrified by Angelo’s proposition and refuses. She visits Claudio in prison and tells him about it, making it clear that she will not subject herself to that, and that he will have to die. The Duke overhears their conversation and suggests a solution. He tells her that she should agree to it and he will arrange for Mariana, who has been jilted by Angelo because her dowry was lost at sea, to take Isabella’s place and sleep with Angelo, who will not know it isn’t Isabella in the dark.

Angelo is preparing to double-cross Isabella, however, and gives instructions for Claudio’s execution. The Duke, still disguised, persuades the prison governor to execute a long-term prisoner, Barnadine, instead, and deliver his head to Angelo as demanded, claiming that it is Claudio’s head. Barnadine refuses to agree, so they decide to use the head of a prisoner who has just died.

Marianna fulfils her part of the bargain, sleeping with Angelo, who believes that she is Isabella. The next day the ‘friar’ tells Isabella that Angelo has deceived her and had Claudio executed. He also announces his return, as the Duke, to Vienna. Isabella and Marianna decide to go together to greet him and complain about what has happened.

The Duke arrives in Vienna with a big public display. Isabella begs for justice. The two women tell their story and Angelo is exposed in public. He is forced to marry Marianna. Claudio and Juliet are reunited.

The play ends with the Duke proposing to Isabella.

And that’s a quick Measure for Measure summary. What are your thoughts – anything unclear, or missing? Please let us know in the comments section below. 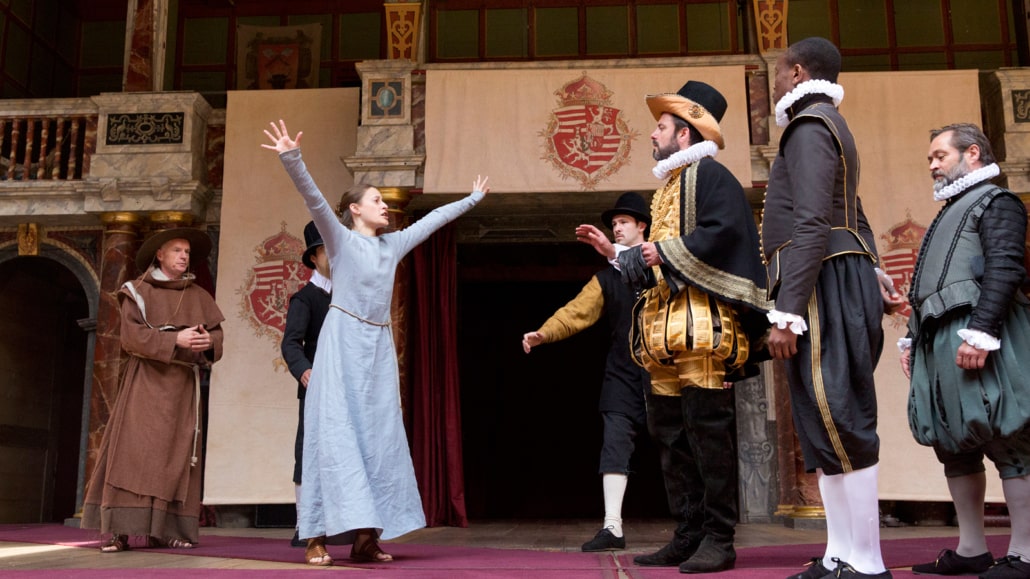 Measure for Measure on stage