William D’Avenant (1606 – 1668) was a poet and a prolific writer of plays, and in some circles was discussed as being a possible illegitimate son of William Shakespeare’s. D’Avenant lived at a time when social history was moving swiftly and he experienced the English Renaissance, the reign of Charles I, the Civil War, and the Interregnum. He therefore had a lot to write about, and did just that, producing many tragedies, comedies, tragi-comedies, masques and an opera.

Living in such uncertain times was dangerous and he frequently found himself in trouble. At one stage he had to flee to France and at another, was sentenced to death.

D’Avenant was a supporter of Charles I. When poet laureate Ben Jonson died in 1637 the king named D’Avenant poet laureate. In 1641, before the war began he participated in the First Army Plot and, together with John Suckling, was accused of high treason by parliament, which was when he fled to France. He returned to fight in the war with Charles, who knighted him. When Charles was defeated he fled to France again in 1645.

In 1650 the exiled Charles II appointed him lieutenant governor of Maryland and while on his way there he was captured, thrown into prison and sentenced to death. His friend, the poet, John Milton intervened on his behalf and he was not executed but spent two years in the Tower. 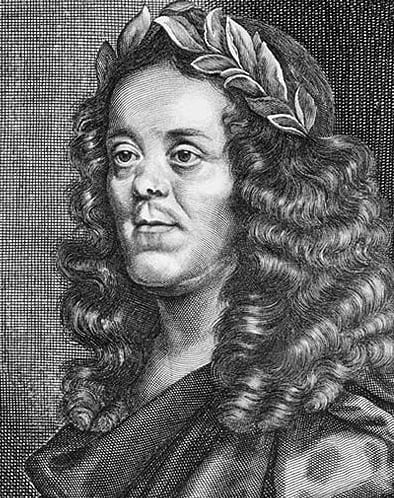 After his release he spent the rest of his life writing and producing plays at his private theatre in Rutland House. He is most notable for the performance of one of his musical plays, The Siege of Rhodes, which is considered the first performance of an English opera. The star, Mrs Coleman, is thought to have been the first professional English actress.

The most interesting thing about D’Avenant is that he may have been the illegitimate son of his godfather, William Shakespeare. It is quite possible because the timing and the circumstances would fit the theory.

Throughout Shakespeare’s career as an actor, theatre writer, and theatre manager, he commuted between his London lodgings and his Stratford home, where his family lived. In the early days of his career he walked but, as he grew prosperous, and later, wealthy, he travelled by coach. The route went through Oxford, where he always stopped for the night at the Crown Tavern, owned by the vintner, John D’Avenant and over the years he became a friend of the family. In late February 1606 D’Avenant’s wife, Jane Shepherd D’Avenant, gave birth to a son who they named William. When, a fortnight later, Shakespeare passed through Oxford on 3rd of March,  he stood as godfather at the baptism of their new-born baby, William D’Avenant.

John Aubrey reported that the satirist, Samuel Butler, told the story of Sir William D’Avenant’s own attitude to the notion that Shakespeare was his father.   ‘He seemed contented enough to be thought his Son.’ When he was sitting, relaxed, with friends over a glass of wine, ‘He would tell them the story… in which way his mother had a very light report, whereby she was called a Whore.’

The evidence is all circumstantial and the story is very much second and third hand, and perhaps, too, D’Avenant was flattered at being thought the son of the great William Shakespeare. Shakespeare’s day-to-day life is very much shrouded in mystery and we don’t have evidence for much of it, other than a few court records, and comments by a few contemporaries. There is nothing to substantiate the story. D’Avenant had some good dinners out on it, even though at the expense of denouncing his mother as a whore.