Queen Elizabeth I of England and Ireland reigned from 1558 to 1603, during the time when Europeans were starting to break out of the cultural constraints imposed by the medieval Church. Great thinkers across Europe were courageously directing their eyes away from the face of God and turning them towards the mind, the form and the ideas of human beings in a huge humanistic movement. Instead of just accepting the flat, two dimensional assumptions about life, God, the planet and the universe itself that the Church pedalled, they were challenging those assumptions. This led to a blossoming of new perceptions in every area of human endeavour – art, music, architecture, religion, science, philosophy, theatre and literature. Artists, composers, scientists and writers looked back beyond the darkness of fourteen centuries and took their inspiration from the humanist qualities in Greco-Roman culture. 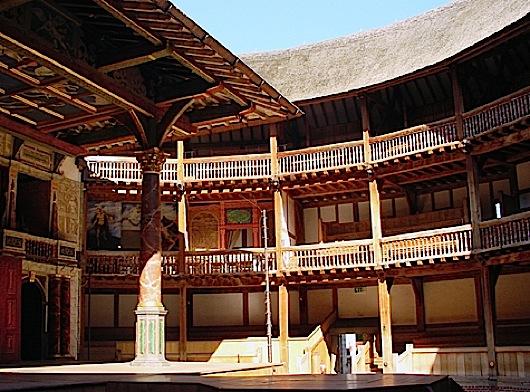 The Renaissance flowered right across Europe but had different emphases in the different European cultures – it was religion and philosophy in Germany, for example; art, architecture and sculpture in Italy. And in England, it was Elizabethan theatre drama. All through the Middle Ages English drama had been religious and didactic. When Elizabeth came to the throne most of the plays on offer to the public were Miracle Plays, presenting in crude dialogue stories from the Bible and lives of the saints, and the Moralities, which taught lessons for the guidance of life through the means of allegorical action. They were primarily dramas about God, not about people.

By the time Elizabeth’s reign ended there were over twenty theatres in London, all turning over several plays a week – plays that were secular in their nature, and about people. That represented a complete revolution in theatre, and makes Elizabethan theatre distinct. What changed at that time was that the theatre became a place where people went to see, not dramatised lectures on good behaviour, but a reflection of their own spirit and day-to-day interests. They wanted to laugh and to cry – to be moved, not by divine reflection, but by human beings doing good and bad things just as they did – loving and murdering, stealing, cheating, acting sacrificially, getting into trouble and behaving nobly: in short, being human like themselves.

This new Elizabethan theatre scene attracted writers of great calibre who thought of themselves simply as craftsmen – in the same way as coopers or wheelwrights did, and not ‘great writers,’ as we think of them today. But even so, most of the theatre writers of Elizabethan England have not been equalled during the four centuries since that time. There was a lot of money to be made feeding this huge new appetite for plays, and good playwrights who played their cards well and made good contacts – as Shakespeare did – became rich.

So when we look back at Elizabethan drama from the twenty-first century what do we see? We see, for the first time, stage presentations of the human experience. We see acts of great nobility by flawed heroes – a great theme of Greek tragedy – perfected by Shakespeare in such plays as Hamlet, Macbeth, King Lear etc. We see human beings at their meanest level; we see psychological studies of the human character, such as the psychopathic Iago in Othello; we see the exploration of the deepest human emotions, such as love in Romeo and Juliet and Antony and Cleopatra. Although most of the plays of the Elizabethan period have an underlying Christian assumption, because of the culture of the time in which they were written they are essentially humanist – in tune with the Renaissance spirit of the time.

In Elizabethan drama, because it is about people rather than God, we see a lot of humour. Again, modelled on the Greek comedies, the humour is perfected by the likes of Shakespeare and Ben Jonson with their memorable comic characters and their satirical look at their own time, as well as light-hearted social comedies. In Shakespeare’s plays there is humour even in the darkest plays, such as the frequent ‘laugh’ lines in Hamlet. Shakespeare more or less invented a form of drama that mixed all genres, so that his tragedies contain comic elements, his comedies tragic elements, and his histories contain both. In Shakespeare’s case the winds of Renaissance gave him the freedom to reflect all aspects of human beings in his plays, and he wrote plays that have not only lasted for four hundred years but which have very rarely (if at all) been bettered during that time.

Towards the end of Elizabeth’s reign playwrights were developing new themes and techniques which led to the distinctive Jacobean theatre with its more crusty, violent plays that focused on the human being’s capacity for selfishness, dramatised in in-depth representations of ambition and its effects.

What do you think of this Elizabethan theatre article – anything to add? Please join in the conversation in the comments below!